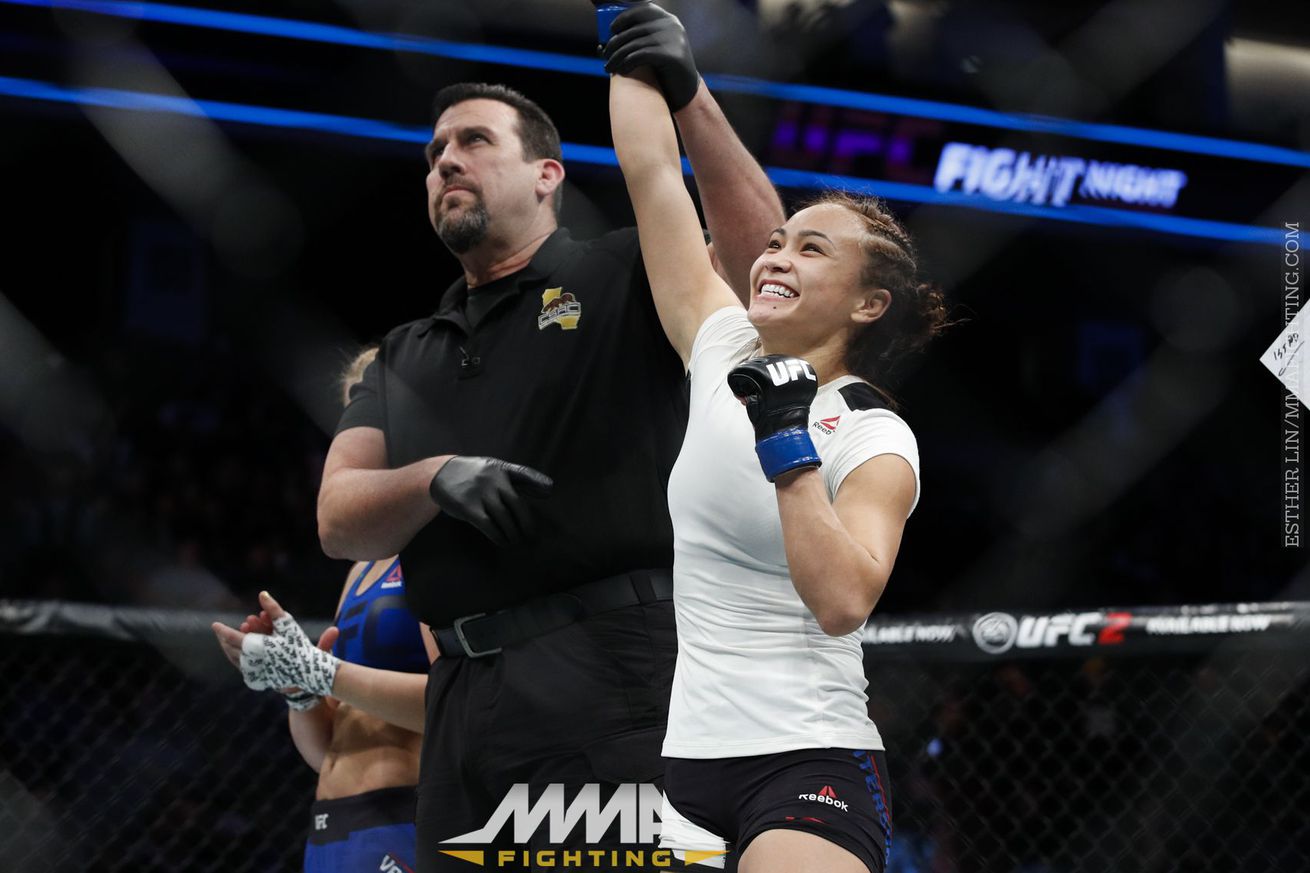 Michelle Waterson ground the momentum of Paige VanZant to a screeching halt on Saturday night, submitting the popular strawweight with a first-round rear-naked choke in less than four minutes in the main event of UFC on FOX 22. It was a near flawless performance for Waterson, and afterward the former Invicta FC atomweight champion said she felt in her groove from the instant the fight began.

“I think that me switching to southpaw really threw her off guard,” Waterson said at the UFC on FOX 22 post-fight press conference. “I think she looked at me and was like, ‘hold up, that’s not what we were getting ready for,’ and so it just kinda screwed with her head. And that was our gameplan from the beginning, was to just stop her momentum, and going southpaw did exactly that.”

Over 17 months had passed since Waterson’s last fight, but “The Karate Hottie” showed no signs of ring rust. Waterson (14-4) stormed out of the gates, downed VanZant with a beautiful throw against the cage, then took VanZant’s back and locked in the fight-ending submission. VanZant resisted mightily, but ultimately Waterson’s veteran savvy stifled the young prospect.

“She’s a great scrambler. She’s showed it in all of her fights, that she can scramble out of submissions,” Waterson said. “So we really worked hard on our jiu-jitsu chain submissions and just making sure not to get frustrated through her scrambles, and when she scrambles out of it, either getting a better position or scrambling into a new submission. And then if none of those worked, getting back up, not wasting any time just in a neutral position.”

Waterson admitted afterward that she did not feel VanZant go unconscious, but said that VanZant’s refusal to tapout was “how you know she’s a fighter.” Waterson also noted that she has always had immense respect for VanZant, despite the minor brouhaha that arose pre-fight when Waterson called her 22-year-old opponent a “very green” fighter.

“I’m not one to disrespect any fighters, but I am also trying to be more outspoken and honest with myself when I answer questions,” Waterson said. “And so, I didn’t mean it as a disrespect. I meant it just as an honest answer coming from somebody that’s been doing martial arts for 20 years, fighting professionally for 10 years, and I know that she just hasn’t.”

Even despite her long layoff, the victory at UFC on FOX 22 puts Waterson in a tremendous spot in the UFC strawweight division moving forward.

VanZant was one of the most popular fighters in the division due to her run to the finals on ‘Dancing with the Stars,’ and now that Waterson is back and healthy from a string of hand injuries, “The Karate Hottie” could be inching very close to title contention. She said on Saturday that she wants to enjoy the holidays with her family, but then she will be ready to go in 2017 whenever the UFC asks.

“Whatever the UFC has planned for me,” Waterson said. “I’m in great condition. I feel amazing. The year-and-a-half (off) really allowed me to become comfortable in my skin and know who I am as a fighter, and know that this is where I belong, and I don’t need to force anything.”