Home MMA News Midnight Mania! Nate Diaz applies for boxing license in Nevada … and expects to get it
ShareTweet 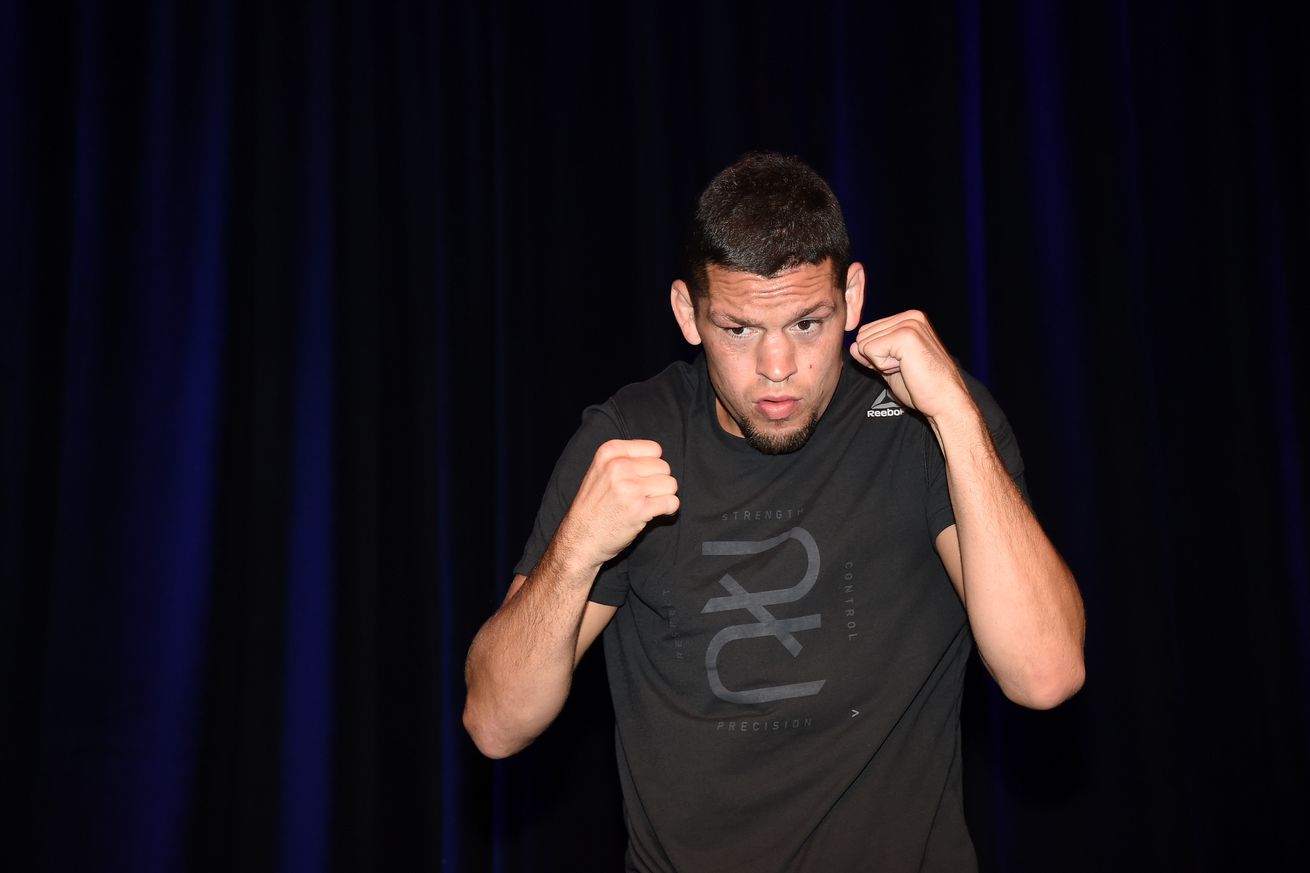 Welcome to Midnight Mania! I hope you brought your caffeine and your taurine and your vitamin B5 tonight! We’ve got Nate Diaz applying for his boxing license in California and Nevada, Chael Sonnen sounding off on everything from Ronda Rousey to Mayweather-McGregor to his upcoming opponent Tito Ortiz, Tim Kennedy reflecting on his storied career (and what’s next for him), illegal slams in the Euros, and much more.

Shoutout to the homie @teammikeygarcia for the @everlast gear.. Thanks and good luck on the 28th in Las Vegas #100

The younger Diaz brother seems to have adopted a “whatever you can do, I can do better” in regard to Conor McGregor’s behavior. This makes sense, given his bouts with the Irish superstar have made Diaz well over $10 million (if reports are to be believed). When McGregor tweeted his retirement, Diaz responded that he, too, would retire. When Mayweather-McGregor talk first surfaced, Diaz said he should be the one in the boxing ring, not “The Notorious.” When McGregor said he would be taking 10 months off, Diaz said he would wait. This time, though, Diaz may succeed where McGregor has failed — Nate is actually expected to get licensed in Nevada, where McGregor got rejected. McGregor did, of course, get licensed in California, where Diaz is also applying.

“Nate paid his fine and has requested a boxing license. Upon his submission of the required licensing information, we expect to approve his license as of this date. We welcome Nate and his older brother, Nick, to fight in Las Vegas, whether it’s with the UFC or a boxing promoter.”

The fine referred to is that $50,000 fine for throwing water bottles. This obviously opens the door for a potential bout in boxing between McGregor and Diaz, and in an event that would not be altogether surprising given Nate’s rocky negotiation history with UFC brass, also means he could have the possibility of challenging his non-compete clause under the Ali Act … or piggybacking off McGregor (again) should the Irishman choose to do so.

We live in interesting times.

Chael Sonnen went on the Rich Eisen show to promote his upcoming main event at Bellator 170 opposite Tito Ortiz this Saturday night (Jan. 21, 2017). He said he is “on the bandwagon” for Mayweather-McGregor and thinks it will happen. He doesn’t think it will be competitive whatsoever, but he is still interested in seeing it.

Sonnen also said Ronda Rousey should look at Mayweather’s offer to train her, because why not?

This is a great promo for his upcoming Bellator 170 bout this weekend at The Forum in Inglewood, California.

Here’s that Bellator “In Focus” video with Chael I mentioned on the CME. It’s pretty darn good. https://t.co/6sghCthQgc

That, of course, strikes a very different tone from this:

Tim Kennedy gave his thoughts on his career and where he sees himself moving forward now that he has retired from mixed martial arts (MMA). He said his favorite moment was knocking out Rafael Natal in front of American troops, and that he would have retired no matter what after his fight with Kelvin Gastelum.

Moving forward, it does sound like he plans to continue his role with the MMAAA, which is hopeful news for the latest fighter association. He also plans on continued roles in several TV shows. Whatever else you may think of him, Kennedy is a man of many talents, and it is good to see someone who is happy to retire and move on.

Mark Hunt, who is saying he was pressured into taking this rematch with Alastair Overeem, at least received this sweet poster made by a fan for his upcoming bout.

This completely illegal slam ended this grappler’s match in the most unpleasant way I can imagine.

That wasn’t all the action from the IBJJF European Championships, though. Slick submissions also happened:

The kid is back at it again! Full 2017 @ibjjf European Championship coverage: https://t.co/jeDgBN2H5M pic.twitter.com/oAjzEViy5M

Takedowns are one of my favorite parts of the game:

Guard passes are my least favorite …

Use your fingers (or mouse ) to manipulate the pass. ⏪ ⏩ pic.twitter.com/cZr6cJk5lf

I didn’t know this … and it’s definitely not a good look:

Remember how UFC wouldn’t grant Angela Hill a USADA exemption to return at UFC 207? Well, the situation has changed. Hill now will face the very tough Jessica Andrade at UFC Fight Night 104: “Bermudez vs. Korean Zombie” in Houston, Texas, on Feb. 4, 2017. The Invicta champion is a much-needed influx of talent to the Super Bowl weekend card.

It’s good to see Hill get an exemption; however, last time UFC did this, it didn’t turn out so well (spoiler alert: it was Brock Lesnar … and now Mark Hunt is suing)

Have you ever tried doing this at the end of a workout? It’s the worst!

I really wanted to show the 2nd video where I looked much cooler. But I figured I would keep it real and show how much of a wuss I was! I made the mistake of telling @ramsdellstrong that my arms were tired and maybe my squeeze was slacking… This mad scientist decided to invent as many ways possible to pump blood into my arms before I quit!! Needless to say I’m gonna be feeling this in the morning! On to the next!

Olympic gold medalist in freestyle wrestling Helen Maroulis will be at SBG Ireland this week. Is MMA in her future? https://t.co/YgqjVPXbhN

Maybe she is just there to offer McGregor a few pointers in case his next opponent is Nurmagomedov.

Excited for a great week of training with @coach_kavanagh and @thenotoriousmma …always good to be challenged and humbled when learning something new. #likemma #learningsomenewdisciplines #ireland #repostwith @repostapp ・・・ A lot of Gold in this picture! 2016 Olympic Gold medalist @helen_maroulis and @ufc Champion @thenotoriousmma

Okay, McGregor fans. I’ll give you this one. pic.twitter.com/WcCv9qQYRT

This doesn’t get old. Also a change to tell you to go back and read my interview with Donald Cerrone’s trainer Brandon Gibson for how they began working together ahead of Cerrone’s recent run of finishes at Welterweight.

THIS KO of the Week is one of the prettiest combinations you’ll ever see in the Octagon, courtesy of @CowboyCerrone ⬇️ #UFCDenver pic.twitter.com/ImfpVzGf8e

This one was nice, too:

FREE FIGHT: Watch as @IronLadyMMA holds it down in her home country at UFC Rotterdam! ➡️ https://t.co/o2nlr8Dezj #UFC208 pic.twitter.com/xiLvT9iSO5

#RIPVINE — I’ve always wondered if this was scripted:

That one time @Ruthless_RL confirmed our beliefs that he will in fact snatch your soul #RIPVine pic.twitter.com/KB2PARmfkI

This was impossible for me to discern.

A wheel of ice:

This guy and I have more in common than I first realized. I, too, am amazing at airballing simple shots.