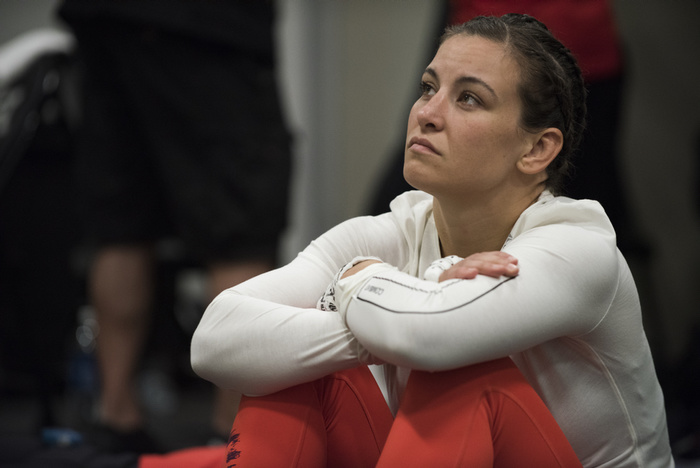 It’s only a few quiet seconds located about halfway through the UFC’s new Thrill and Agony clip on YouTube, a two minute blast of highs, lows, sound, and fury from UFC 205 in Madison Square Garden last weekend. But, given the person involved, it’s as dramatic and definitive as any shattered tibia or teeth-loosening KO.

“I don’t want to fight anymore,” Miesha Tate tells her romantic and training partner Bryan Caraway in the Octagon, moments before Bruce Buffer announced the official decision—a unanimous one for her opponent, Raquel Pennington—and moments before she would go on announce her retirement from MMA. “I don’t want to do this anymore.”

Heart is so hard to define in sports—especially combat ones. It can’t be measured as easily as strikes. It’s not even as obvious as something like ring control. MMA’s scripted cousin, pro wrestling, has abused the abstract concept to such an extent that legendary announcer Jim Ross often made it sound like some sort of mystical element that could only be channeled at the most dramatic moment of a fight, or perhaps shifting into another gear. But it’s both more ethereal and more powerful than that: a key component of a fighter’s psyche that is almost as impossible to manufacture as it is to define. Something that can rarely win a fight completely on its own, but can surely sink even the most dedicated of athletes when it’s gone.

And although the concept of heart might be hard to pinpoint in MMA, there are few who can argue that former UFC and Strikeforce Women’s Bantamweight Champion Miesha Tate didn’t have it. Heart, in fact, may have been one of her strongest qualities as a fighter both in and out of the cage over the course of her decade-long career. You need to ….View full article