Home MMA News Miesha Tate on UFC retirement: ‘I don’t want it to go in that direction, but anything is a possibility’
ShareTweet 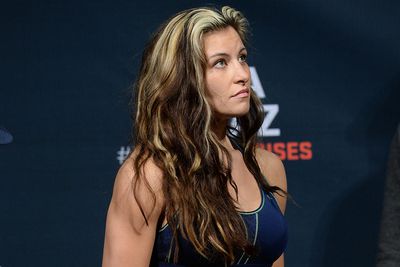 Not unless “Cupcake” can see the light at the end of the tunnel.

Tate (17-5) was promised the next shot at reigning 135-pound queenpin Ronda Rousey, only to have it ripped away in an attempt to “save her career.” While the former Strikeforce champ understands how the fight business works, there is only a finite amount of time she’s willing to play gatekeeper.

From her conversation with ESPN:

“I fear that they want me to fight all the other top girls, and the connotation is that if they beat me, they get a title, but if I beat them, it’s ‘bring on the next one.’ Essentially, I feel like they have deemed me as a gatekeeper, and that’s fine for a while because I put myself there. I won and lost those fights. But there has to be some light at the end of that tunnel. If there’s not, what is my future in this sport? It’s a very fine line. All I can say is I don’t want it to go in that direction, ….View original article