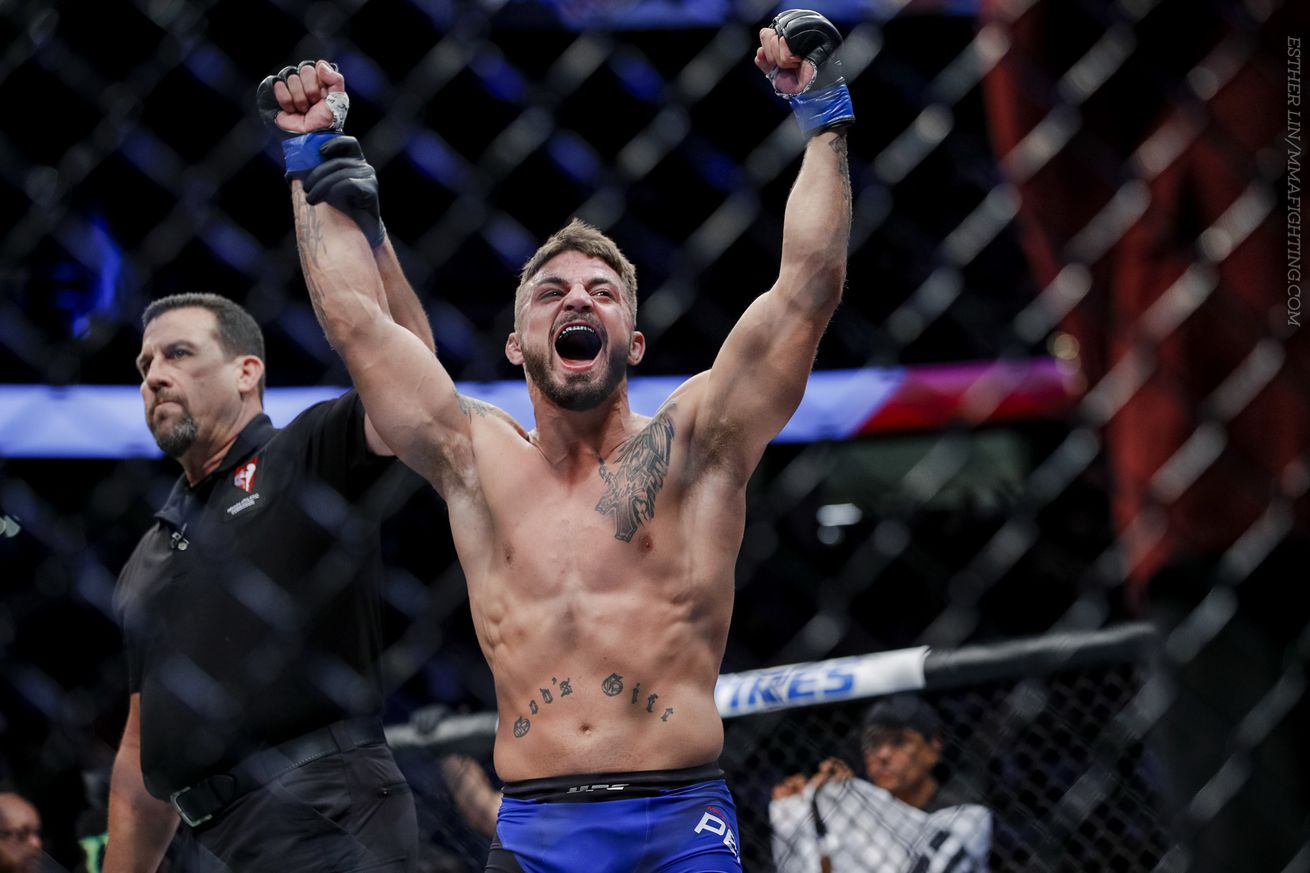 Mike Perry’s road to UFC Pittsburgh has been a harrowing one.

The hard-hitting welterweight, who faces late-replacement Alex Reyes in Saturday night’s co-main event, was involved in a nasty car accident on May 25th. According to Perry, he was stopped at a stoplight and waiting to turn when his vehicle was rear-ended hard by another driver. Perry said he suffered two herniated discs in the accident, as well as frequent headaches that lingered for several weeks.

But that wasn’t the worst of the damage.

“Something happened in the car accident and I possibly ingested a piece of metal,” Perry said Monday on The MMA Hour. “And I didn’t know about it for a couple of days. I was going to training and I had a friend of mine pressing me up against the fence, and he put his shoulder in my stomach and he pressed in, and he’s like 6’4” or 6’5”, so when he really leaned in, he’s got good leverage, and I didn’t think nothing of it — there was just this sharp pain in my stomach. And I just pulled guard and went to the ground, and I was like, ‘Wow, man, good job, dude, that was a lot of pressure, that took a lot of energy out of me.’”

Perry, 25, said later that same night he held a victory party at a club to celebrate his April 22 knockout win over Jake Ellenberger — a “Platinum Party,” as he called it — and things grew even more worrisome when he took a shot of alcohol and the pain he felt earlier that afternoon exploded all over again.

“I was dying on the inside,” Perry said. “I went to the doctor the next day, or the day after, and they ran some tests and stuff like that, and they were like, ‘Did you eat a coin? Did you eat something? Did you ingest a piece of metal or something?’ And I was vomiting blood for a couple of days, and I had to go get [a procedure done where] they stick a camera down your throat to see what’s going on. I beat up my insides with that piece of metal, it cut me up and stuff, and it just took awhile to really get back to eating food, and my weight was low because I just didn’t have an appetite because of all the pain that I went through. It was pretty severe. It’s wild that as healthy as I am and as I was, and all the exercise and all the clean eating, just like, that I almost didn’t make it. That’s how I felt.

“I really didn’t think I was going to make it, man. I was dying. Literally dying.”

Perry said the symptoms continued for weeks, sapping his energy and his appetite, causing him to wake up exhausted every morning after the accident, even before he’d go through his daily routine.

“Accidents are tricky, man,” Perry said. “Something like that, especially a tough guy like me, I’m feeling pain … it was a mix of a piece of metal in my stomach and a herniated discs in my back causing nausea, and I couldn’t decipher the two until they told me about both. And then I started realizing the differences in my body between back and stomach where the pain was really coming from, and it was coming from both places.”

While the incident marked a scary time for Perry, the welterweight contender is better today. After dealing with waves of increasingly serious issues, Perry said doctors believe he eventually passed whatever foreign object that had found its way in his body.

Still, even now, Perry has no clue what exactly it was.

“I have no idea. It passed and I missed it,” Perry said. “We tried to look for it, but I wasn’t digging through sh*t, but we were hoping to hear something and we never did.

“I’m in the best shape of my shape, I’m stronger and better than I’ve ever been. I’m so fast, I’m so ready for this. I can’t wait for Saturday.”

Months after the troubling experience, Perry can now look back on the strangeness of the situation and laugh. For a fighter nicknamed “Platinum” to deal with an issue like that on his way to fighting in Pittsburgh, aka “The Steel City” — the coincidences are almost too much.

“I was thinking so highly of myself that I created a piece of platinum inside of my stomach and it hurt me,” Perry joked. “I hurt myself. Don’t tell that to the insurance companies.”