Home MMA News Mirko Cro Cop: For most fighters, the end to their careers is violent
ShareTweet 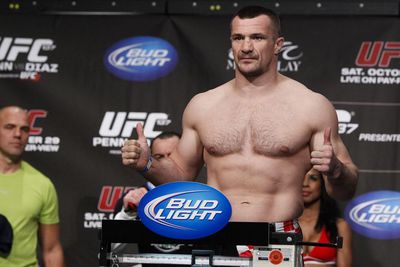 Mirko Filipovic put a bow on his legendary mixed martial arts (MMA) career after an injury forced him out of his scheduled bout against Anthony Hamilton, which was set to go down this past weekend (Sat., Nov. 28, 2015) at UFC Fight Night 79 in Seoul, South Korea.

And though he went out on a three-fight win streak, his exit from combat sports wasn’t exactly ceremonious.

Aside from leaving hurt, news surfaced that “Cro Cop” had failed a pre-fight drug test for injecting human growth hormone (HGH) to help with his ailing shoulder.

It was a finding that the Croatian didn’t deny.

During a recent stop at “The MMA Hour,” “Cro Cop” talked about his decision to retire, saying that just like his exit, most fight careers come to an end in a rather “violent” way.

“Listen, that’s life. This is a violent sport and, in most cases, the end is violent. You either leave this sport with a serious injury or you lost three or four fights in a row and your employer doesn’t want to give anymore fights. That’s true about this sport. It’s either injury or you lose fights and get fired. But, that’s the law ….View original article