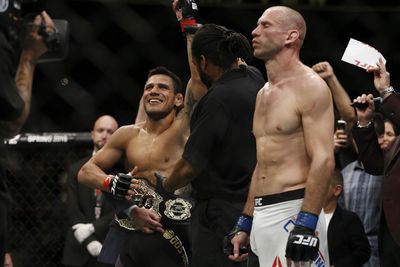 Another weekend of fisticuffs has come and gone, as UFC on FOX 17 blew the roof of the Amway Center last Saturday night (Sat., Dec. 19, 2015) in Orlando, Florida.

Plenty of fighters were left licking their wounds, including Michael Johnson, who saw his title hopes go up in flames after Nate Diaz walked away with a unanimous decision victory (see it). And Junior dos Santos, who was knocked out by Alistair Overeem in the second round of their heavyweight collision.

But which fighter is suffering from the worst post-fight hangover, now 48 hours removed from the show?

After what I’m sure felt like an eternity of waiting for a man who fights every other weekend, Cerrone climbed into the Octagon with the hopes of winning his first-ever Ultimate Fighting Championship (UFC) title.

In the process, “Cowboy” — who was undoubtedly the sentimental fan favorite — looked to obtain some get-back from “RDA” after the Brazilian bomber defeated him two years ago in what was his last loss before going on his eight-fight win streak.

That bout proved to be more competitive, as dos Anjos absolutely blitzed through Cerrone this time around to the tune of a 66-second knockout victory to retain his 155-pound strap (see it again here).

And though the bout didn’t last too long, trying to dissect where it went wrong isn’t that hard, as “Cowboy” revealed during the post-fight press conference (video replay here) that the knee to the body delivered by “RDA” proved to be the dooming strike.

Sure, Rafael piled it on with a body kick and a bevy of punches to the dome to put on the finishing touches, but the perfectly-placed knee is what started the downfall, according to Cerrone.