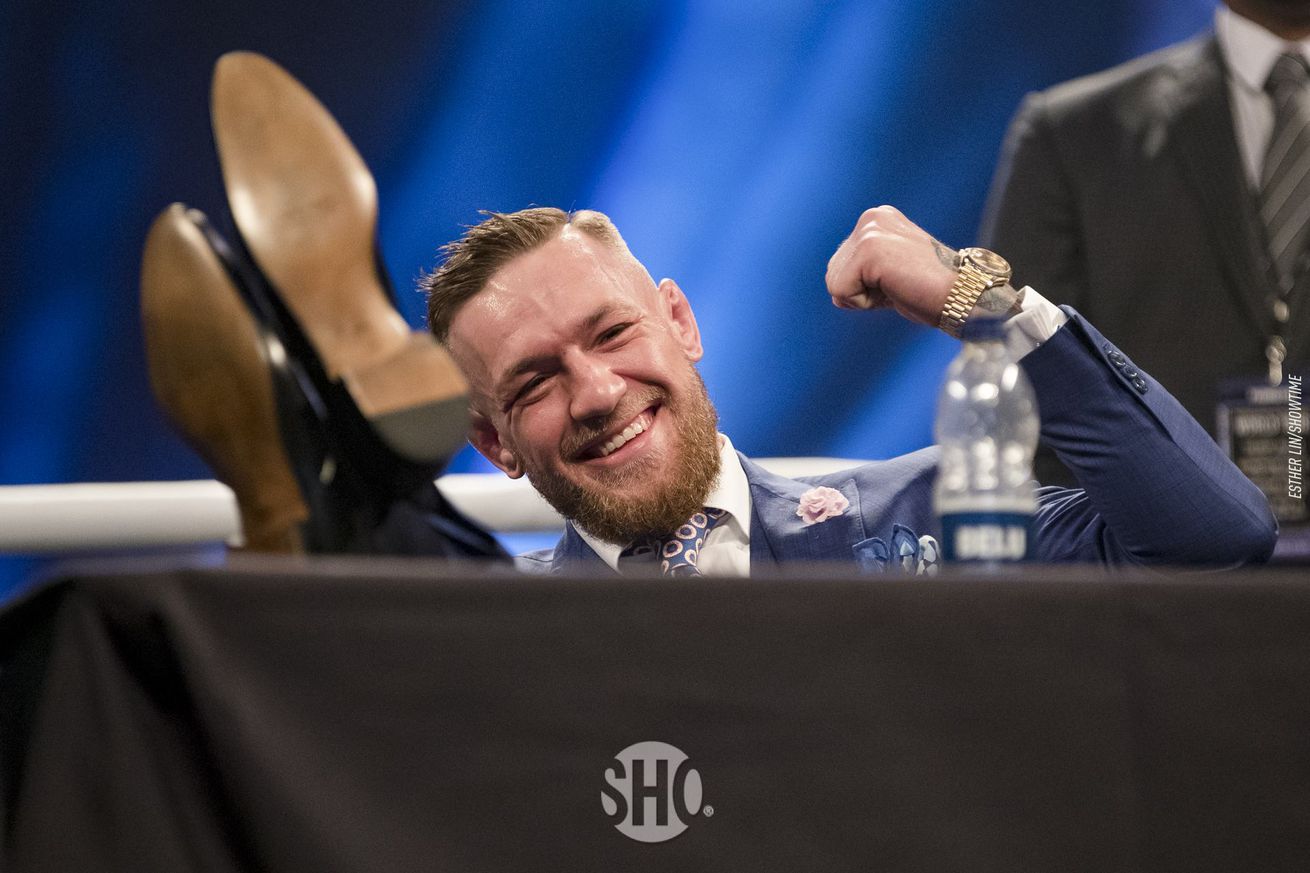 A few weeks ago, UFC President Dana White suggested that after lightweight champion Conor McGregor gets done boxing Floyd Mayweather, he’d like to return to the UFC and take on No. 1 contender Khabib Nurmagomedov. Even more impressive than wanting to fight a man many perceive to be McGregor’s toughest test though, White said McGregor wanted to do it in Nurmagomedov’s home country of Russia.

White made mention of this again during the MayMac media world tour and after things were all said and done, McGregor confirmed his interest in the bout when speaking to BT Sport.

“That’s certainly an option that I’m exploring. That would be a spectacle. It’d be like something out of Rocky. I suppose this whole story is like a Rocky story, right? So why not face a man in his home country, and a crazy place like Russia. It’s certainly something I’d like to do. There’s a couple of options on the table so let’s see what unfolds.”

Nurmagomedov began calling for a bout with McGregor after dominating Michael Johnson at UFC 205 last year, but when McGregor took some time off for the birth of his son, Nurmagomedov agreed to face Tony Ferguson for an interim title belt. That bout never came to fruition though as Nurmagomedov was hospitalized before weigh-ins. Still, Nurmagomedov is an enormous star in Russia, and if McGregor has become accustomed to only taking part in enormous spectacles, the UFC offers few other fighters capable of delivering on one so grandiose.

Logistics of holding an event in Russia aside, there is one other snag with McGregor facing Nurmagomedov. There has been rampant speculation that after his bout with Mayweather this summer, McGregor will never return to the UFC, and if he does, he may be on the shelf for a while after taking on the Herculean task of boxing Mayweather. But McGregor says don’t worry about any of that because he’ll be back to defend his title in no time.

“I believe so. I believe I’ll come out of this fight without a scratch. [Take] a couple weeks to refresh my jiu-jitsu and my wrestling – not that I’ve stopped training that either, I’ve still kept up on that, just less – and then we’ll see what happens.”

McGregor faces Mayweather in a boxing match on Aug. 26 in Las Vegas, Nev.

Results. UFC Fight Night: Glasgow took place over the weekend and here are the results.

Call out. Santiago Ponzinibbio wants Carlos Condit or Neil Magny for next opponent.

Next. Cris Cyborg believes Holly Holm could be next for her after UFC 214.

Rewatch (or peep for the first time) one of the best fights of the year.

And UFC hitting you with some free fights as well.

McGregor interview after the Friday presser.

One of the best knockouts of the year.

Three Amigos. An important interview with a neurologist talking about weight cutting and head trauma.

He did and he turned in his best performance.

For you dad. I will walk in front of this hostile crowd. #gotime

Is it possible to lose you voice if you’re Joanne Calderwood? #UFCGlasgow pic.twitter.com/wOWQjVtY5S

Can someone give me one good reason why Charlie Ward is in the UFC other than being McGregors teammate? pic.twitter.com/siStQ8pX4b

If this is real, I can’t imagine a more idiotic thing.

New tattoo. What do you think @TheNotoriousMMA? pic.twitter.com/gCnSphWvxx

So he’s coming for the food?

This would be awesome.

Andy going for another Diaz fight.

Andy ain’t the only one trying to fight a Diaz brother.

Yo @NateDiaz209 what’s up? You gonna fight again? Let’s get it

Paige got a tattoo.

Can’t imagine Tim would be taking the black.

Things are getting serious around here preparing for #GOT7 pic.twitter.com/TpV1lSom9X

Did you know that #mayweather has been convicted of domestic violence 3x and accused 7x. Spend your money accordingly #McGregorMayweather

For a card that was written off by a lot of people (justifiably), Fight Night Glasgow was a really fun, violent event. The only bad thing about Glasgow was Bofando got robbed of a POTN bonus but other than that, great card. And the rest of the weekend wasn’t too bad either. Campos-Girtz on Bellator was legitimately one of the top 3-4 fights of the year. So all-in-all, a great weekend. Let’s hope this one coming up is just as good.

Take it easy y’all and see you tomorrow.