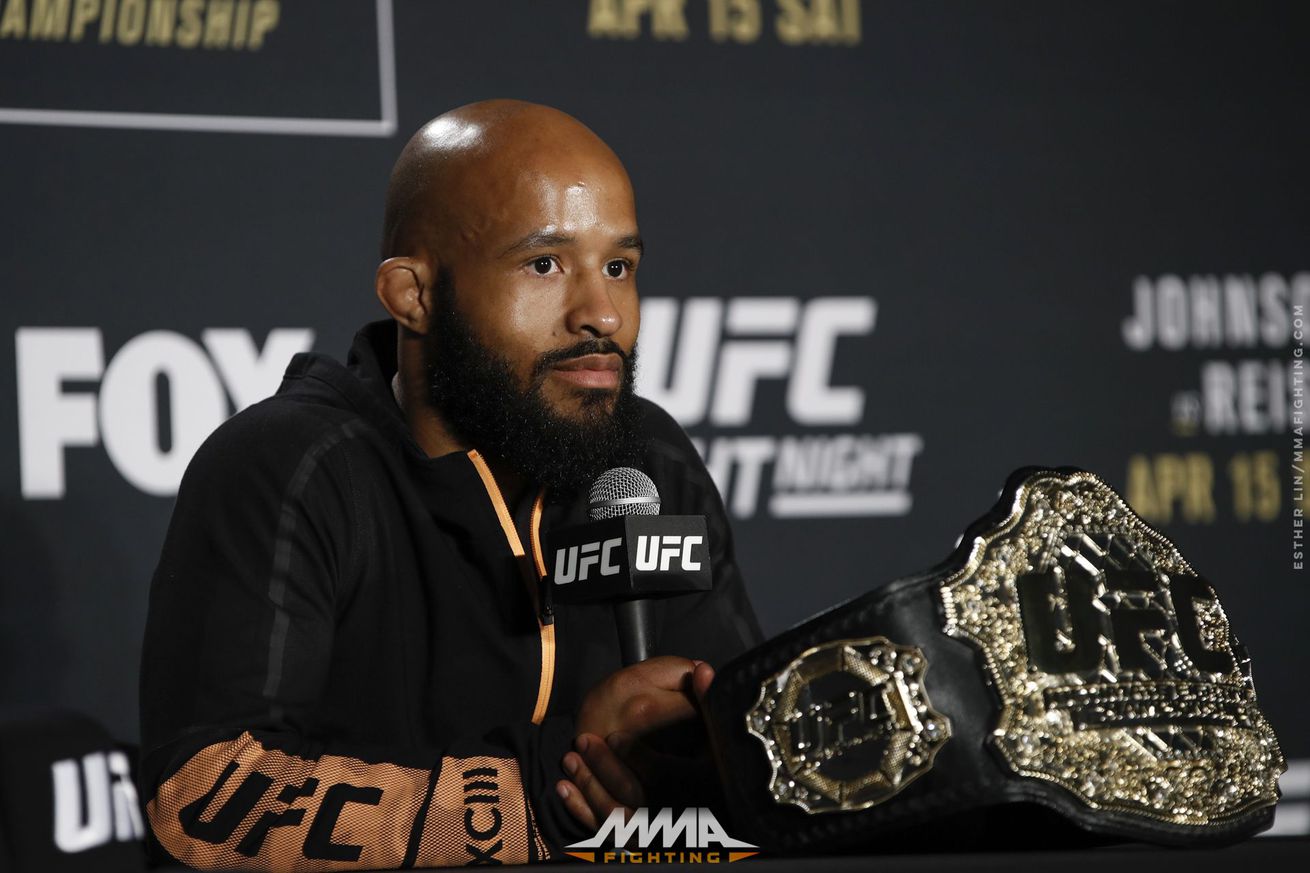 Recently, rumors abounded that the title fight between bantamweight champion Cody Garbrandt and former champion T.J. Dillashaw was in trouble due to a back injury suffered by Garbrandt. In light of possibly losing his title shot, Dillashaw began campaigning for a different belt, that of flyweight champion’s Demetrious Johnson. Now, it seems that Dillashaw may get his wish.

Yesterday, ESPN reported and MMA Fighting confirmed that Garbrandt had been officially removed from his scheduled title defense and that the UFC was hoping to book Johnson vs. Dillashaw in a flyweight title bout in August.

Johnson is the UFC’s only ever 125-pound champion, and at this point, his biggest challenge has been finding competition. A fight with Dillashaw would circumvent that issue while also potentially providing a compelling opponent for a champion in desperate need of one to increase his marketability. The biggest concern is that Dillashaw has never made the weight and historically, the UFC has tended to make fighters take at least one fight in a new division before receiving a title shot.

Dillashaw seems unconcerned by that though, and he took to Twitter to try and gin up interest in a title shot over presumptive No. 1 contender Ray Borg.

Would you rather see @MightyMouseUFC headline Seattle and fight Me or @tazmexufc ?

Should Dillashaw get the fight, that leaves Borg in the lurch. Borg is currently the third ranked flyweight in the UFC and believed to be the next logical opponent for Johnson since the champion has already beaten the other top contenders. Borg took umbrage with Dillashaw’s campaigning for the title shot based on popularity, a contest he obviously could not win, and the two had a brief exchange about it.

@TJDillashaw @MightyMouseUFC Lol of course fans are going to choose you, look at how much more established you are than me.

@tazmexufc Nothing but respect for you.

Aside from being the de facto flyweight title challenger, Borg comes with his own set of concerns for the UFC. At 23 years old, he’s still relatively unknown to fans and he’s currently only on a two-fight winning streak after losing a unanimous decision to Justin Scoggins in February 2016. And while there are concerns about Dillashaw being able to make weight, there are also concerns with Borg’s ability to do the same as he has missed weight in two of his seven UFC fights. The flyweight contender responded to those concerns in his own Twitter post, saying that he had his weight issues fixed and that he wanted the Johnson fight but would fight Wilson Reis instead if that was the fight he was given.

Here is were I stand goodnight. pic.twitter.com/9i1LbVVHBa

But Johnson doesn’t want Borg to have to do that.

Johnson previously stated that he wasn’t interested in a fight with Dillashaw because Dillashaw has never competed at flyweight and isn’t the current 135 pound champion, saying, “this wouldn’t be a super-fight because TJ is not a champion. He’s just a 135er coming down to 125 to skip the line that other flyweight competitors have worked hard to climb.”

“Mighty Mouse” reaffirmed his earlier position that he isn’t interested in a fight with Dillashaw, stating that he is awaiting a contract to fight Ray Borg as his next fight.

At this point, no fighter has anything booked but if the UFC wants a flyweight title fight to headline an August card, things will have to move pretty quickly to get that lined up.

Shake-up. Yoel Romero and Robert Whittaker will fight for an interim title.

Messed up. Rory MacDonald believes the UFC “messed up” when they let him leave.

Wolf tix. Kajan Johnson explains the turn of events with Reebok at the UFC fighter retreat.

Cyborg. Dana White says the UFC is looking into the “very serious” incident between Cris Cyborg and Angela Magana.

Chiesa and Lee get remixed.

Hell of a knockout.

Volkan Oezdemir got himself a Vlog.

I hope they don’t expect us to wear that shit!!! https://t.co/AsAr8iF4Dl

@Reebok @UFC I’d like to request a romper for my corner @EricDelFierro and @SrPina_ to wear at the #TUF25Finale. DM me for measurements. https://t.co/xJsTFn6A7C

This fight is so dumb. Just throwing away good natural beef at 135 for no real reason.

I agree with Dj, if tj really wanted to fight me he would wait!! https://t.co/TH2U3rYNuS

The retreat was not a success..

@bjpenndotcom He also said they don’t want to sponsor the guy who just got knocked out. With the most arrogant tone and attitude. Seriously disrespectful

The shade here is unbelievable.

Gotta hand it to @CMPunk, his Challenge career already lasted longer than his stint in the UFC. @ufc @danawhite #ChampsVsPros @ChallengeMTV

I was the first Aussie to fight for a UFC World Title, Rob will be the third. I wish him all the best and hope he… https://t.co/M0eJde4ahI

Thanks for the tweets about how my art should be at the @ufc hq. After 15 yrs i realize they only employ monkeys who throw shit on a canvas. pic.twitter.com/YHpbS74wIJ

Alot can happen in 8 years….. pic.twitter.com/05KmKZ1cXl

Joanna is a gangster, never forget.

2008: B.J. Penn fulfilled his promise that Sean Sherk was dead, stopping him with a brutal knee to retain his UFC lightweight title at UFC 84. The co-main event that evening saw Wanderlei Silva in almost 10 years when he knocked out Keith Jardine.

2014: T.J. Dillashaw upset Renan Barao to claim the UFC bantamweight championship at UFC 173. In the co-main event, Daniel Cormier beat the brakes off of Dan Henderson to secure himself a shot at Jon Jones’ light heavyweight title.

DJ is gonna catch a heat for this, but honestly, he’s right. Or at least, half right. TJ has never fought at 125 and frankly, until he does so I don’t really care to see him do it just for a title shot. There is every possibility he will look awful by cutting an extra 10 pounds and flyweight is the division with the most weight misses by far. Remember when Anthony Pettis was gonna drop to featherweight and he looked like trash in every one of those fights? Why do we want to do that to Dillashaw?

Also, this seems like a questionable plan by the UFC. Garbrandt has all the makings of a star. He and TJ have a legitimate, organic beef, and the UFC built a TV show around promoting that to build Garbrandt up. Now, they’re just gonna trash all that on a throw away title fight for Dillashaw? Instead of having Cody build his star against a compelling foil they’re just gonna run back the Cruz ass kicking? This is some real putting the cart before the horse stuff and makes zero sense to me. Qui bono? TJ wins, he comes and beats your GOAT champion on a lark and basically invalidates 125. DJ wins, you kill off your best 135 contender and DJ is in exactly the same place he’d be by tooling up Ray Borg or Joey Benz. And you’re not putting this on a PPV, that’s for damn sure so the UFC doesn’t gain anything either way. This is dumb and I have no idea why we’re entertaining it.

Take it easy everyone and see y’all tomorrow.