Home MMA News Morning Report: Dominick Cruz says Cody Garbrandt wants the rematch ‘because I’m the only fight that raises the bar in this division’
ShareTweet 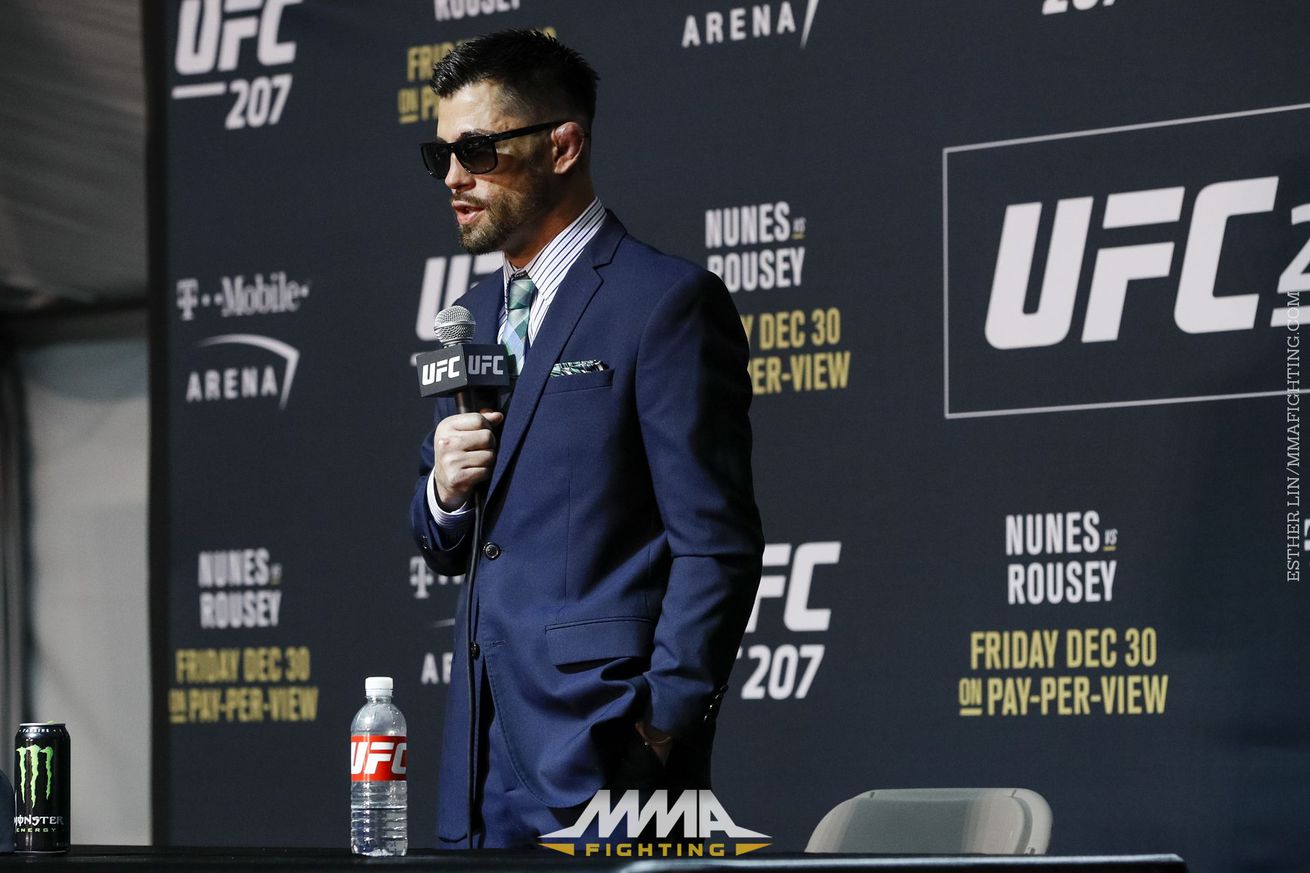 AT UFC 207, the man widely considered to be the best bantamweight in the history of MMA, Dominick Cruz, was upset by Cody Garbrandt, losing the UFC bantamweight championship. In the aftermath, Cruz didn’t shy away from the loss but promised to return and make another run at the title.

But Garbrandt doesn’t want to wait. In the post-fight press conference, the new champion was adamant that Cruz deserved an immediate rematch and Garbrandt has maintained that these past couple of weeks. Cruz however seems to be in no rush, and while co-hosting TMZ Sports this week, the former bantamweight champion questioned why the new champion is so keen on rematching him.

“I expect him to be mad at me from that camp. I embarrassed him pretty good leading up to it with the things that I said which where the honest truth and he proved they were the truth by getting mad. But more than anything he keeps saying, ‘I’m at the top’ and ‘rematch, rematch.’ You’ve got the title. Why are you asking to rematch me?

“He knows that I am better than him. He wants the rematch because I’m the only fight that really raises the bar in this division.”

The trash talk leading up to their fight at UFC 207 was some of the most heated in the sport. Indeed, most believe Garbrandt jumped to the head of line of contenders because of the war of words the two were sharing for most of the year. And though Cruz won the verbal battles, Garbrandt ended up winning the physical one pretty cleanly, even breaking out into dance moves during the fight, and afterwards claiming that he could have knocked out Cruz but opted not to because he was having so much fun. Cruz is specious of the claims though.

“If you’re in there to fight me fight me. Don’t back up the whole time and dance… He’s trying to portray that he’s this tough guy that wanted it to go that long.”

It may well be that Garbrandt is once again trying to goad Cruz into fighting him. If Cruz refuses the immediate rematch, Garbrandt’s next opponent is most likely his former training partner and former bantamweight champion T.J. Dillashaw. Garbrandt has insisted he’d rather not fight Dillashaw because Dillashaw doesn’t “draw pay-per-views” but appears to be willing to do so if he can’t get Cruz again.

Take the rematch I’ve blessed you with or I’ll cut the snakes head off and await for your return! @DominickCruz @TMZ https://t.co/LHDcYZsdUv

For now it seems like that is the plan. Cruz seems perfectly content to let Dillashaw get the shot he’s earned and he’ll fight whoever’s left standing when it’s all said and done.

“Whenever I come back, I’m fighting for the title. I don’t know who it’s gonna be though.”

And as for losing his belt to Garbrandt and how a rematch would play out differently, Cruz remains confident he will win in the rematch, and isn’t unhappy about his performance this time.

“It was a good fight. It was competitive the whole time. I’m out there to put a show on. that team alone has 35 rounds against me. It was about time they got one.”

Fire. Khabib Nurmagomedov vs. Tony Ferguson is official for UFC 209.

Confidence. B.J. Penn is confident UFC Phoenix will not be his last fight.

Injury. Stefan Struve pulled out of his fight with Junior dos Santos due to injury.

Contender. Jessica Andrade wants to return at UFC Houston against a top contender.

Wonderboy on his newfound trash talking.

We have Joe Lauzon taking your questions LIVE ahead of #UFCPhoenix

Means Conor has to fight the winner.

Was he asking for Anderson Silva money again?

That’s right @cody_nolove I’m coming to whoop that ass and bring the belt to JERSEY.… https://t.co/9EbttkmoFV

People keep asking about my next fight so I guess it’s time to announce this: I decided after my last fight that I was ready to be done.

@Amanda_Leoa AW Thanks Champ, but i know the truth is I am one of several coaches that make up #AmericanTopTeam and you’re the biggest star

@dc_mma Champ, it was fun. Lets hope we will do it again in the future .

Dear @RondaRousey You only lost 2 fights and got paid 3 mil for the last one. If that’s rock bottom, where do I sign up?

Bad news folks. Unfortunately I won’t be able to fight in Halifax february 19, I’ll be undergoing surgery to fix a torn labrum in my left shoulder tomorrow afternoon. Docter said I will be on the sideline about 4 months, and of course I’m gonna be doing my best to make it back asap. I apologize to the fans, especially the people who bought tix for the fight in Halifax, and of course the person I was scheduled to fight @junior_cigano . It’s the very first time I have to pull out of a fight because of an injury and it hurts my heart to do it. I’ll keep you guys up to date about the surgery tomorrow and the rehab the next couple months. As always thank you for the support!

Conor would have a pretty big size edge on PBF. Not that it would matter.

Caught up with @floydmayweather while in New York!

The kid could be a big star.

So great to meet the new champ @Cody_Nolove this morning!!! pic.twitter.com/8rC0PPbpLF

We started in September. Now we end in the middle of January. This was a camp to remember for the rest of our lives! My body,mind and heart is ready for war! Not one rock was unturned during this camp. 8 more days of fine turning my weapons and off to battle I will go! @raphaeldavis205 @parilloboxing @scottcarrgbcm @hititorquititfitness @bear_cat_ @rvcasport #gracebarracostamesa thanks for helping me. #bellator170 @spiketv @bellatormma #FinalFight #20years

USADA selfies are the new thing.

Both tested by USADA today & both eating our @dacikfitfoods meals!! ( @ashleemma’s is vegan ). We are practically twins lol

See. The dude is clean.

Love him or hate him, you do have to respect that Chael doesn’t pull out of fights. Here’s hoping neither Khabib nor Tony pull out of this one because it may be the best fight in MMA right now.

That’s all folks. Have a good weekend and see y’all Monday.