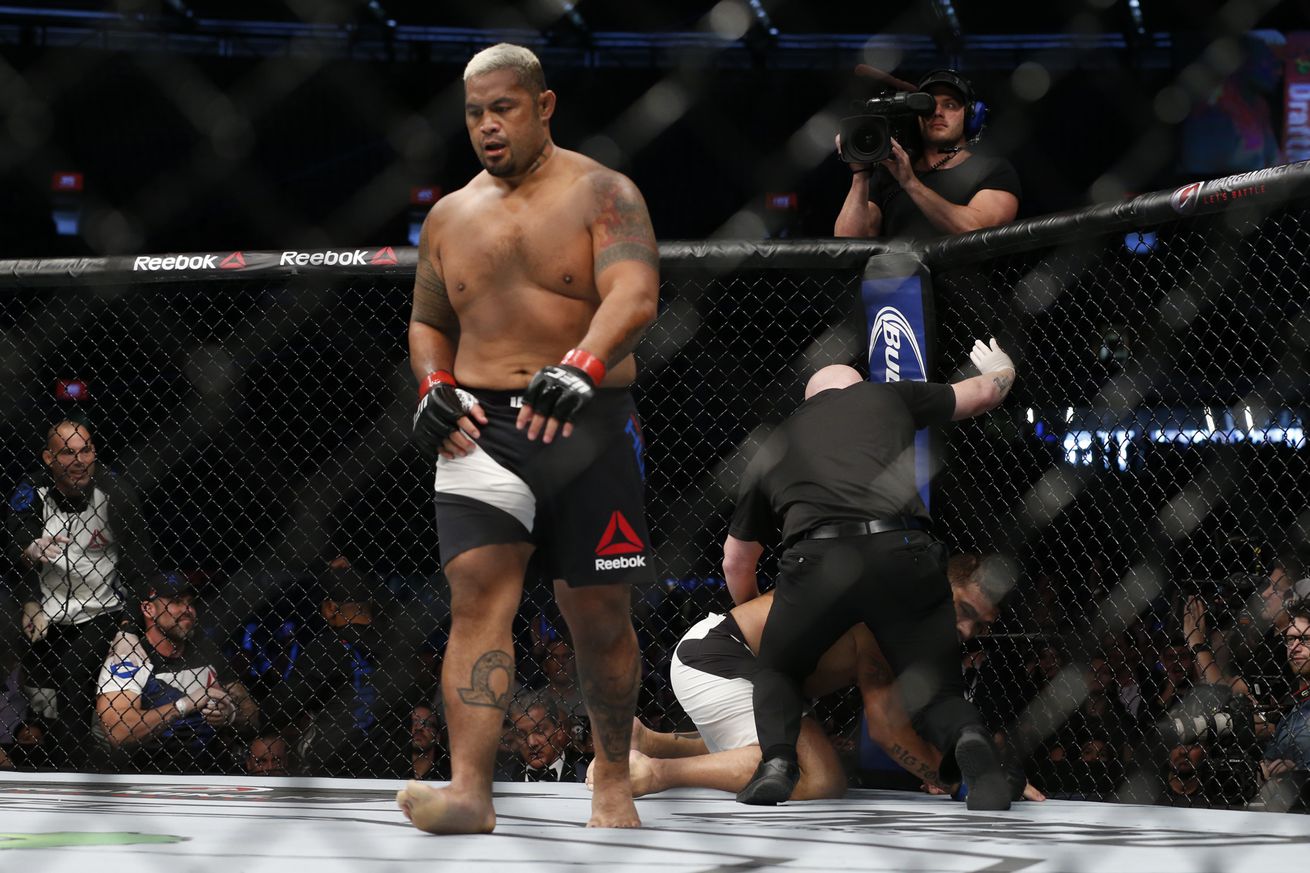 After Jon Jones stopped Daniel Cormier in the main event of UFC 214 to reclaim his light heavyweight title, he immediately set his sights on bigger game: former UFC heavyweight champion, Brock Lesnar. Lesnar was quick to respond to Jones and suddenly, the UFC had the makings of a superfight on their hands.

Or, a superfight for some. For others, a potential Jones-Lesnar matchup would be less of epic clash and more of a race to the bottom. Chief among those opponents of the fight is the last man to stand across the cage from Lesnar, Mark Hunt.

Speaking recently on the Real Quick with Mike Swick podcast, Hunt exasperatedly discussed the potential fight, calling it a clash between “the two biggest cheaters in the world.”

“Look at these f**kers. You’ve got Jon Jones, for instance. That guy is the best, one of the best fighters in the world but he’s a cheater. . . Just like Brock Lesnar, you’re all a pack of frickin’ dog cheats, that’s all you are. Nothing else.

“So now the two f**king biggest cheaters in the world are going to fight! Oh f**k. . . I’m not gonna waste my money watching two cheaters fight. Why would I? They’re cheaters, in the end. That’s basically all they are. They should get nothing. I used to respect Jon Jones before this but I don’t respect him after this. When you get caught for doping, and he got caught for the same dope that Lesnar did, you shouldn’t – he’s not a martial artist, none of them are. They get no respect from me. None.

“I wouldn’t want to waste my f**king time watching that s**t.”

Hunt is the last man to have fought Lesnar, facing him UFC 200 in the WWE’s stars return to MMA after an almost five year retirement. Lesnar won a unanimous decision that night which was subsequently overturned when it was revealed he failed two USADA issued drug tests before the bout. Hunt has since filed a civil suit against Lesnar and the UFC to settle his grievances.

Jones, of course, was also supposed to compete at UFC 200 against none other than Daniel Cormier but was removed from the card three days beforehand as a result of also failing a USADA drug test. Both Jones and Lesnar tested positive for clomiphene, though Jones also tested positive for Letrozole. Both men were suspended for one year; Lesnar was also fined $250,000.

And that is part of the problem for Hunt. Hunt says that though USADA is trying to clean up the sport, allowing Lesnar and Jones to fight each other just a year after both failing drug tests, isn’t deterring cheating in any way.

Lesnar may not actually return to fighting. His contract with the WWE does not end until spring and he is currently in negotiations so it is possible Lesnar stays retired from fight for good this time. However, even if he doesn’t come back, Hunt doesn’t think anyone should want him to anyway.

“Cheating is nothing to be proud of. That’s the wrong message. We don’t allow that as a society so why do we allow that, especially in fighting? Fighting is you hurting people.”

Victory. Floyd Mayweather says Conor McGregor lasting 12 rounds would be “a victory for him.”

Undercard. The undercard for MayMac has been announced featuring some big names.

Schaub out there doing his thing.

Tim Kennedy on The Chive.

Gracie Breakdown of Brian Ortega-Moicano with the man himself.

Okay, that is pretty boss.

Thank you @donatella_versace for this amazing gift this morning pic.twitter.com/SEoH3QlpPB

Well at least he’s honest about it.

We’re only talking MMA because of Conor fighting Floyd in a match. That’s it. https://t.co/2OJR32nRdu

If Francis Ngannou ever has beef with you, apologize.

I’ll be your sparring partner. pic.twitter.com/UhHhTBCrjC

Just had to get this off my chest,I’m sure you guys will find out about this shit soon,plus I know they still follow me pic.twitter.com/U7jqKZCr4J

Werdum boldly still shilling for the most reviled man in MMA. Cash those checks.

Found it. The worst beef in MMA history.

Yo @BrendanSchaub your really talking about Conor beating Floyd?
Ain’t happening
Irish Eyes Will Be Blackened

Yo! I promise you @TheNotoriousMMA will win one or more rounds. Plus, if there’s a stoppage it’s due to a Conor TKO/KO. Bet? https://t.co/AHow6Y7GMl

This aint Bow & Arrows.1 or 2 rounds?Give him a fucking participation trophy.I’m talking WIN/LOSE. This is aint a 3rd grade frisbee team https://t.co/ut0TrCT3DE

Yo! I promise you @TheNotoriousMMA will win one or more rounds. Plus, if there’s a stoppage it’s due to a Conor TKO/KO. Bet? https://t.co/AHow6Y7GMl

As critical as I am of Dandois, Coker should definitely pick her up.

Dear @ScottCoker … I need To have a talk To u! I really need a new home And I am open To fight Any 145-girl on your @BellatorMMA roster!

Those middle school level takedowns are not going to work against me @demianmaia #youshouldhaveretired https://t.co/3qfOM8rlRQ

Ever since I became a world title contender, the other contenders looking for new jobs. “The Natural born Barista” in his new habitat. https://t.co/v8jE7GZV27

If you’ve got the time, Hunto tells some stories on that podcast that are interesting to say the least.

And so we are at the end of our first week off in a minute. Go out and enjoy your weekends people because die-hards don’t get too many of these empty Saturday nights and they should be maximized. Only 15 days left until the big one.