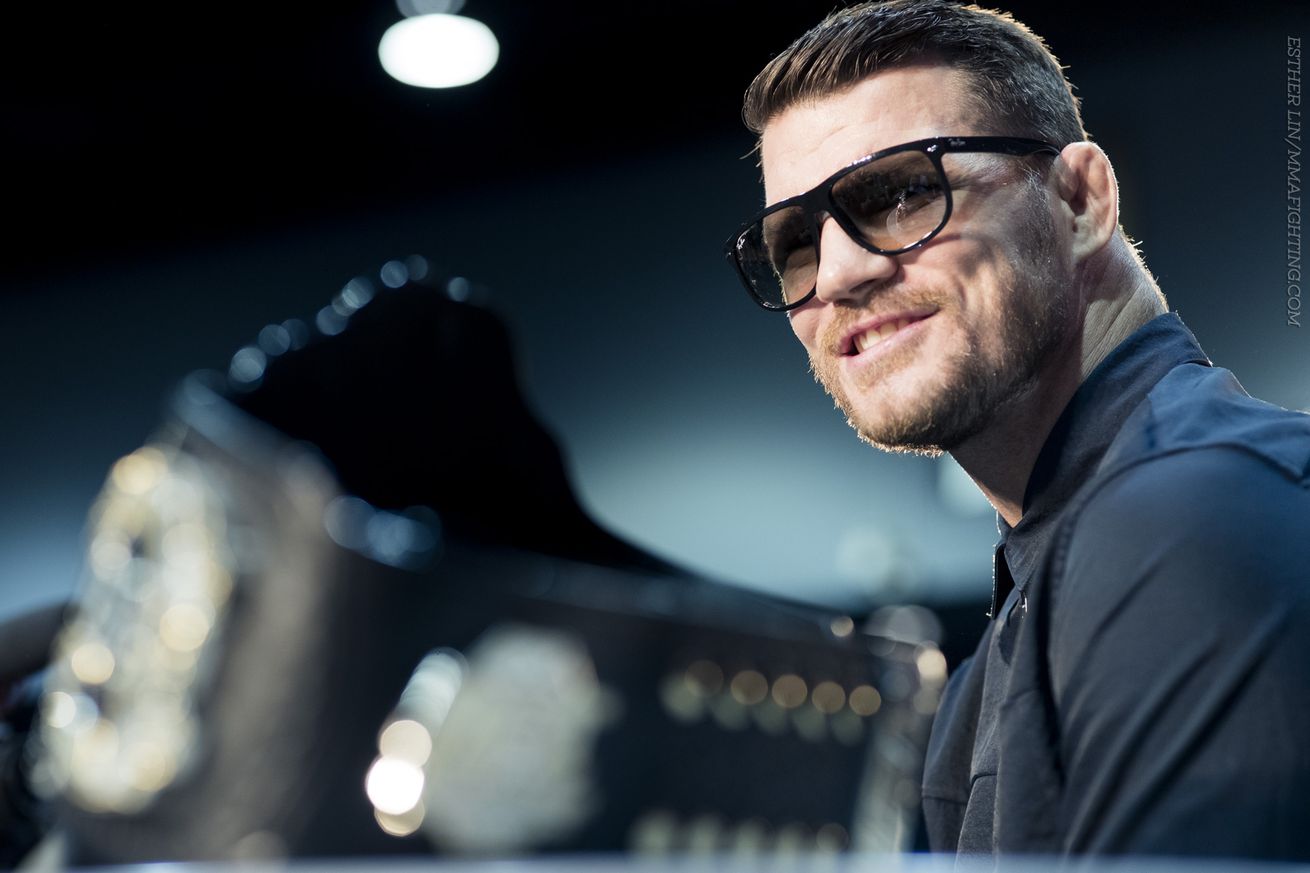 Yoel Romero might be about to get very upset.

Last fall, Romero cemented himself as the presumptive No. 1 contender in the middleweight division by knocking out former champion Chris Weidman with a jumping knee at UFC 205. Before the bout, UFC middleweight champion Michael Bisping was explicit in saying he wouldn’t fight Romero even with a win due to Romero’s previous issues with USADA. Then after Romero stopped Weidman and jumped on the microphone to call out Bisping, the champion changed his tune, saying he absolutely would take on Romero and was hoping for a spring title defense.

Now things may have changed again. Speaking with Champion.co recently, Bisping said he won’t be returning to action until late spring and due to a nagging injury and some necessary surgery.

“First and foremost, I am still UFC middleweight champion of the world,” Bisping said. “I have to defend that belt, simple as that. Dana actually- Dana White, UFC president- actually contacted me and spoke about a fight recently but I’ve been having a lot of issues with my knee so I’ve got to have a knee surgery. Maybe around end of April, May something like that, I’ll take a fight.”

Previously there had been some discussion of Bisping facing Romero at the upcoming UFC 208, and though that date obviously fell through, the general assumption was that Romero was still next on deck for the champion. After all, Romero is a former Olympic silver medalist wrestler that’s currently on an eight-fight win streak in the UFC’s middleweight division with three victories over top contenders. But Bisping says that may not be the case. After having his potential fight with Romero delayed, now Bisping says he wants this biggest money fight he can get, and if that’s Romero, great. But if it’s not, he wants whoever is going to bring him the biggest box office numbers.

Bisping has been fighting in the UFC since 2006 and is currently tied with Tito Ortiz and Frank Mir for most fights in UFC history with 27. His record though is substantially better, winning 20 of those fights compared to 15 and 16 respectively. Since the UFC began using its own rankings, Bisping has fought nine times with eight of those bouts against ranked opponents.

But despite his consistently high level of opposition, Bisping has drawn the ire of many in the middleweight division for chasing after money fights. His most recent fight was a rematch with the 13th-ranked Dan Henderson at UFC 204 which ruffled the feathers of many middleweight contenders who were ranked much more highly than Henderson.

The specific confluence of events that led to that fight – Henderson’s retirement, his status as a legend, the iconic knockout Bisping suffered in their first encounter, the lack of a clear cut contender among a group of deserving opponents – ended up making the fight more palatable to the other middleweights vying for a title shot but most expected the division to be returned to a meritocracy afterwards. But in the age of the “money fight,” nothing is certain.

It will be interesting to see how the rest of the division reacts, especially Romero who has made it clear he will wait for a title shot.

Not exactly MMA but some video of Idris Elba learning how to kickbox.

Ronda appears to be taking this loss better.

And Ludwig going after Faber.

Coach: When u weigh in, try to look tough AF. Intimidating
Bethe: I’ll pull my pants halfway down &give a thumbs up
C: No, don’t thats stup- pic.twitter.com/SL6oVxx0fw

And some beef while we’re at it.

Shut your big mouth up. We contacted Sean , so hang tight clown face. I can’t wait to give you a fresh scars https://t.co/s7cFULp3xO

Right. One of us has seven TKO finishes on their record, & one of us took Jennifer Scott & Angela Magana to decisions you ain’t doing shit https://t.co/1iDd1Msptr

Because Chael was never in danger & Tito paid a price for holding on to long when I stuck my thumb into his Larynx. Trust me it hurt #AskBJM https://t.co/huNA8V8vxg

Woodley-Northcutt is making a run at Arlovski-Dodson for best buddy pairing in MMA.

Our guys @TWooodley and @sagenorthcutt are freezing in Milwaukee, but as T-Wood says, it keeps ya humble! ❄️ pic.twitter.com/pIeXSCzVcR

Throwback Tuesday!!! My boy found a pic from Quinton’s audition for Big Momma’s House. There is a picture of when he auditioned to play Rasputia in Norbit. My boy @iamwomack dug this one up.

Pix from Quinton’s audition as Rasputia for Norbit. #howyoudoin

Don’t call it a comeback.

The comeback tour has begun. https://t.co/D9UHGIYgE6

A video posted by Danielle Nickerson (@platinumprincessofficial) on Jan 24, 2017 at 3:56pm PST

I would pay to watch Thomson and Nurmy’s gym rolls.

2007: Rashad Evans puts one on the highlight reel, knocking out Sean Salmon with a head kick at UFC Fight Night 8. This event also featured the debut of Pride veteran Heath Herring who lost to Jake O’Brien via unanimous decision.

2009: Jamie Varner defeated Donald Cerrone by technical split decision to retain the WEC lightweight championship. The result was odd in that Cerrone landed an illegal knee in the fifth round causing the bout to be stopped and sending it to the cards where two judges scored the fight 49-46 for Varner and the other judge scored the bout 48-47 for Cerrone.

2014: Ben Henderson defeated Josh Thomson via split decision at UFC on Fox 10. This event also saw the beginning of Nikita Krylov’s winning ways in the UFC when he head kicked Walt Harris.

So it was brought to my attention yesterday that I’ve been had, posting tweets from a parody account of Tyron Woodley that’s been getting retweeted by other people in the MMA Twitter bubble. It’s a good replica. Dude’s handle is the same but for the “L” in Woodley being a capital I instead. Shame because I thought it was Woodley making fun of the people telling him not to bring up race and thought it was hilarious. Now it’s much less fun.

Anyway, just thought it should be noted that that’s a thing and I’m wise to it now. You have my sincere apologies for presenting them to you, and I’ll be much more vigilant going forward.

Take it easy y’all. Until tomorrow.