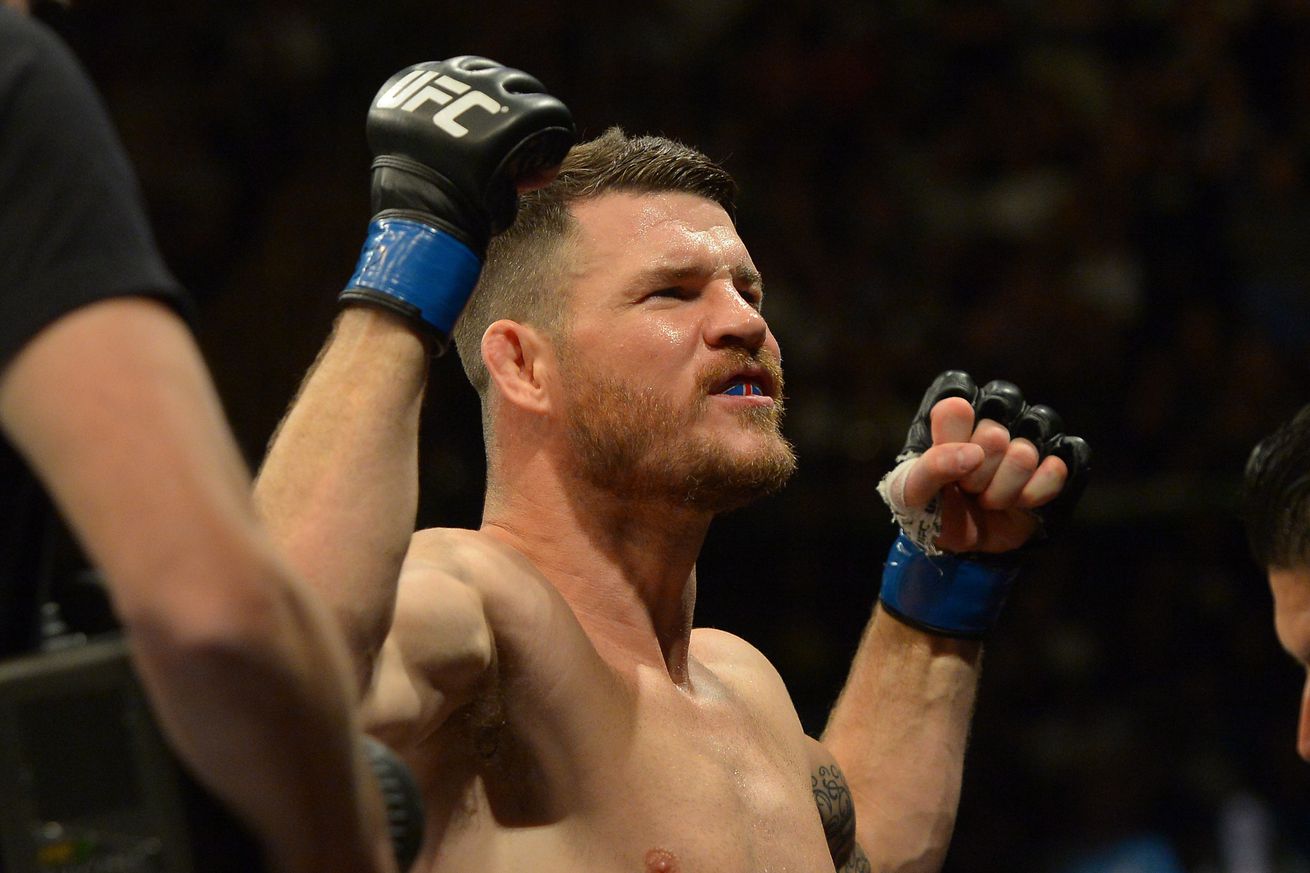 On Monday, former UFC welterweight champion Georges St-Pierre went on The MMA Hour with Ariel Helwani and dropped a minor bit of news about his upcoming title shot against middleweight champion Michael Bisping: if he wins the title, St-Pierre is contractually obligated to defend the 185 pound belt instead of going in search of other big money fights.

It was a big revelation, especially considering members of St-Pierre’s own team had mentioned possible fights with Nick Diaz and Conor McGregor as being on St-Pierre’s radar after the Bisping bout. But with such a contract stipulation in place, should St-Pierre win the title, he would have to forego those fights to face interim middleweight champion Robert Whittaker.

Except, maybe not, at least, not according to the current champion. Speaking on his Believe You Me podcast yesterday, Michael Bisping reacted to St-Pierre’s revelation and opined that, regardless of any contract, St-Pierre is in the driver’s seat thanks to his marketability and the UFC’s desperate need for stars.

“All that stops Georges from doing – Georges is still in the position of power, much as I don’t like to admit that. Listen, I’m fighting GSP and I have a fan base and people like to watch me fight or people like to see me get knocked out. Win or lose, people do tune in. But GSP is a big name and he brings the huge Canadian market with him and that’s what the UFC are after. They want all those Canadians to start buying the Pay-Per-Views again. From what I’m hearing, Pay-Per-View sales in Canada haven’t been doing too well lately so they want GSP to come back and they want all those people, all those lumberjacks to start buying the Pay-Per-Views again.

“If, God forbid, he beats me, he has it in the contract that he has to fight Robert Whittaker. But he can retire. He can retire if he wants. They cannot force you to fight. So let’s say he was to say, ‘I retire’ and then say, ‘Hey, listen, I’ll come out of retirement to fight at 170 [pounds]. UFC, do you want to sell all those Pay-Per-Views again, yes or no? It’s up to you.’ So really . . . one would assume that he can really do what he wants. They can’t force him to fight.”

The UFC cannot legally force St-Pierre to fight; they can however, strip him of his title if he refuses to fight the contender they deem next in line for him to face, a lesson Germaine de Randamie learned recently. The question then becomes, would they want to? Recently, the UFC has shown a willingness to cater to the demands of their biggest needle-movers, even setting up Bisping with a favorable first title defense in his home nation against the 47 year old Dan Henderson. And, as Bisping admits, St-Pierre brings more attention and more money than he does and so the UFC would likely be willing to do even more for St-Pierre than they did for him.

“[St-Pierre]’s in the position of power, really. Of course Dana’s the promoter, the UFC are the promoters but we’re the fighters and GSP has that Canadian market that buys Pay-Per-Views. Unfortunately for me, I’ve got a fantastic following in the U.K. – I have a great following and God bless you all – but the way it’s structured in the U.K., we get the UFC for free. There’s no Pay-Per-View so there’s limited – it’s a big attraction to the UFC to have the U.K. market but to have the Canadian market that has a history of buying Pay-Per-Views, you pay for the UFC in Canada so that’s more beneficial to the UFC.”

So for now it appears that the winner of Bisping-GSP will be defending his title against interim champ Robert Whittaker. But if 2017 has taught us anything it’s that appearances can often be deceiving; after all, it was just a few weeks ago that the Dana White claimed the Bisping-GSP ship “had sailed” only to see “that ship f*cking turned around and sailed back.”

Beef. Artem Lobov says he would “box the ears off” of Paulie Malignaggi.

Beatdown After the Bell. Reaction to DWTNCS and the two new UFC fighters.

Conor getting it from everyone.

Everyone in the gym was doing their best Conor McGregor impression today, I think I won. Let’s hope his fight v Mayweather is entertaining pic.twitter.com/1uvFrYaviL

Getting my day started with a little #McGregorChallenge, #flowy… Get tix to my Aug 25 #boxing match at https://t.co/dJqnHmTZHY. pic.twitter.com/sVgt5w5otD

Tonya probably getting another crack in the UFC then.

Proud to announce that I will undergo an athlete evaluation by the Sanford Sports Science Institute. Always looking for ways to improve https://t.co/2a1bfu2NmR

Hands of Stone bringing the heat.

Bc @FunkMaster_UFC is a real man and this fighting shits emotional bc we put everything into it. #RealMenCry https://t.co/ogWplzo2GX

I put my all into this shit. If I wanna release my frustrations through a few tears, wipe myself off, and get back to the grind, then I will https://t.co/l1YJjf9dwH

Yet to be confirmed but #wouldwatch.