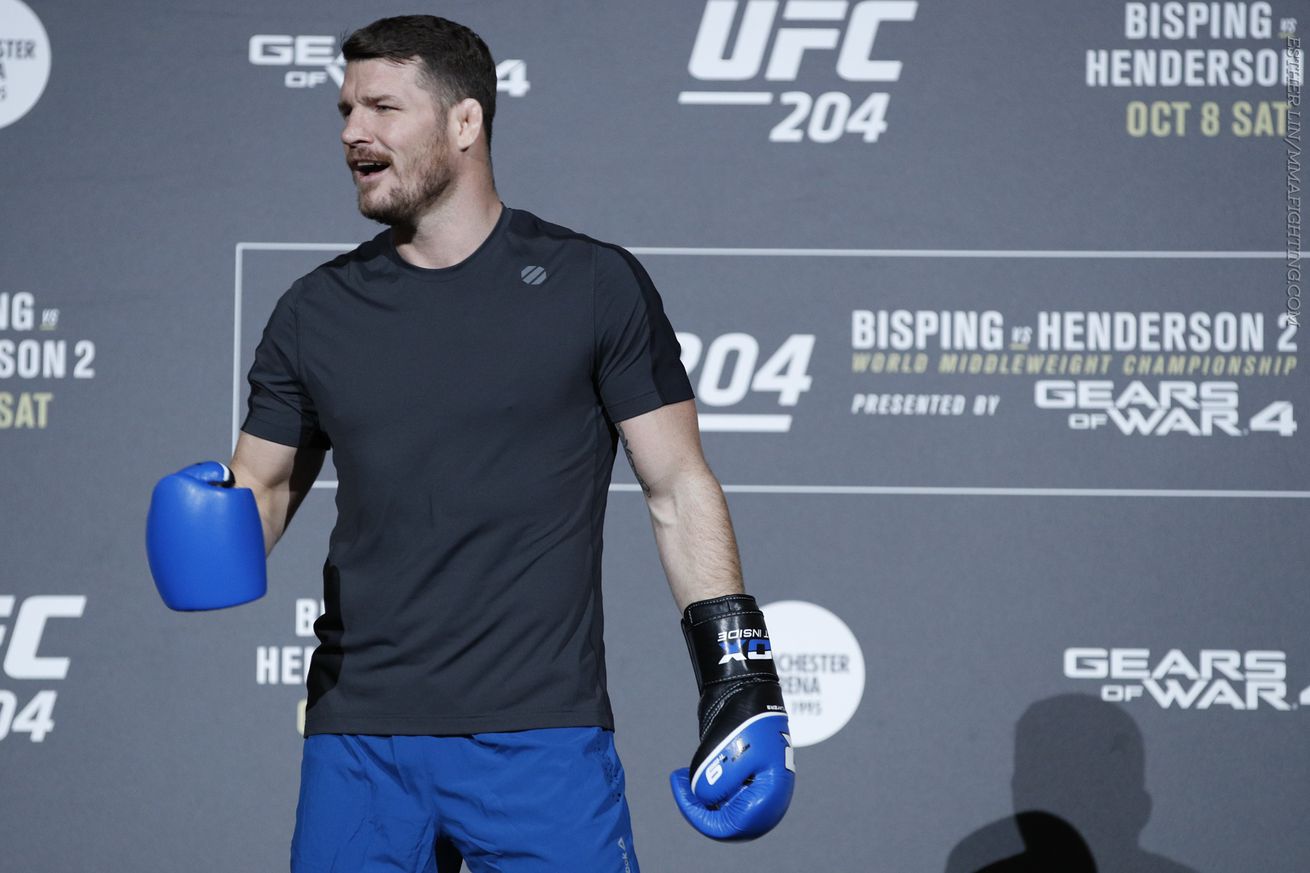 Wednesday’s news that Michael Bisping would be defending his UFC middleweight championship against Georges St-Pierre ruffled a lot of feathers with fans and fighters lamenting the decision to have St-Pierre leapfrog established contender Yoel Romero. However, the only feathers Bisping seems to care about ruffling now are those belong to his future challenger.

In the most recent episode of his radio show The Countdown on SiriusXM Rush, Bisping launched his first, tepid salvo in what is sure to be many shots taken at the former welterweight champion, echoing sentiments that have followed St-Pierre for much of his career: that he isn’t a “true fighter” and that he “doesn’t like to get hit.”

“You gotta have both. You need a combination of it all. You need both. You’ve got to be athletic, of course. You’ve got to have the technique of a martial artist. But you’ve gotta have that will power and that heart of a fighter and a champion. And of course he’s got that to a certain degree, but there’s a reason why he stepped away.

“He said, ‘I’m stepping away because of steroids, until they bring in other testing.’ Well unfortunately, that was the only platform that we have. I knew people were taking steroids but quitting was never an option and joining them was never an option while still continuing to fight. So I think there was an element of truth to what Dana White said. He said he ‘doesn’t think [St-Pierre’s] heart’s in it.’ I don’t think it was. That’s why he stepped away. Now he’s bored, he wants the limelight again, he wants the attention, he wants to be around the circus. Of course, there’s a payday there as well, and again, he’s looking at me and he thinks he’s gonna walk in off his big hiatus, be the middleweight champ, make history, and look like a god. But of course, that ain’t gonna happen.”

Claims that St-Pierre doesn’t have “a fighter’s heart” have followed him since his loss to Matt Serra where he taps out to strikes. From there, most famously, B.J. Penn claimed that St-Pierre was more athlete than fighter in the buildup to their superfight at UFC 94. While since then St-Pierre has shown tremendous durability and toughness, even overcoming a vicious head kick from Carlos Condit and still winning the fight, the stigma persists among a group of MMA fans that St-Pierre doesn’t respond well to adversity in the cage. A view Bisping also holds and one he says is the key differences between the two of them.

“He doesn’t enjoy [getting hit]. Of course, nobody enjoys getting punched in the face. But there’s a part of me that f**king loves that. I love getting down and dirty and having a good tear up and a good scrap. . . I’m not trying to be such a tough guy because I’m not the only one. There’s many of us like that. The UFC is full of them. Georges isn’t one of those. He’s a tactician. And that’s all well and good but you see that look in their eyes when they get hit with a good one. It diminishes their soul a little bit.”

St-Pierre isn’t the only one with a bit of a reputation though. By accepting a fight with St-Pierre, an unranked fighter hasn’t fought in three years and has never competed at middleweight, instead of fighting the No. 1 middleweight contender Yoel Romero, Bisping’s reputation is in jeopardy of looking suspect to a contingent of MMA fans. The UFC champion who never fought top contenders. But Bisping says there’s no danger of that because after St-Pierre, he intends to beat a top contender to secure his legacy.

There has been rumblings among the general MMA fanbase that this isn’t true though. Having finally secured the biggest non-McGregor fight in MMA, Bisping will be coming into a substantial sum of money later this year, and at 38 years old, some have speculated that his fight with St-Pierre will be his last. Bisping says that is absolutely not true, though it isn’t far off. The middleweight champion says that he only intends to fight two or three more times before calling it a career.

“No, there’s not [a chance of retirement]. If I win, I want to fight the No. 1 contender. I do. 100 percent that’s what I want to do. I’m not a p**sy. I’m not trying to avoid hard fights. I’ve had hard fights my entire career. And even though I know that won’t be my legacy, I don’t want to give the possibility of that being my legacy, avoiding the No. 1 contenders. So if I beat GSP I definitely want to fight the top guy. And if I lose, I’m sure as hell not having my last fight, after such a great career, having my last fight being a loss.

“But I’ll tell you this, when I beat Georges and then I fight Yoel or Jacare – whichever one it is – and if I win that, there’s a possibility that that could be my last fight. It’s getting close. My wife doesn’t want me to fight much longer. I’ve done this a long time, I have got injuries, I’m covered in scars, and I can’t do this forever. I don’t want to do this forever. And certainly now with GSP, with this being a big payday, this will enable me to retire a little bit sooner. But I’m still very much a fighter and I still will continue. So GSP, Romero, and maybe one more.”

Back to back. MMAFighting.com won Media Outlet of the Year and all the other World MMA Awards.

Tony two weights. Tony Ferguson says Tyron Woodley should watch out because he won TUF as a welterweight.

Fan made promo to get you hype heading into UFC 209.

Mark Hunt is fired up.

Hey @TeamKhabib, @Capitals captain @Ovi8 has a message for you! #UFC209 pic.twitter.com/W6oME1FmsB

Just to end these rumors right away, me and @francisngannou aren’t fighting in Sweden may 28th. I’m still recovering from shoulder surgery. pic.twitter.com/HaxLQ0R5ld

Probably try to win both ! https://t.co/b5sbJT1P8t

It was good Wrestling class. Excuse me UFC @ufc I’m ready to fight. you know No fight No party No Bitches. That’s a Hell. Give me fight. pic.twitter.com/Skab2PY5nm

HAHA ! @ForrestGriffin & @MetroPCS got you covered this Saturday leading up to #UFC209! #CloserThanEver

I have no idea what’s going on here.

A post shared by Diego Sanchez (@diegonightmaresanchezufc) on Mar 1, 2017 at 6:06pm PST

Cro Cop throwing it back.

Those were the days..

Has the UFC changed? 11 times in Zuffa’s history they have introduced an interim championship. 4 of those times were in the last year.

Looks like Jorge was hanging with some of the ruggers in Vegas.

#lasvegas We’re back! First we going to take over the tables and then we take over the @ufc welterweight division. #easymoney #hostiletakeover #degenerates #ufc @gamebredfighter

2007: Randy Couture came out of retirement to win the UFC heavyweight title from Tim Sylvia at UFC 68.

2012: The UFC began their flyweight tournament to claim the first ever 125 pound champion with Joseph Benavidez knocking out Yasuhiro Urushitani and Demetrious Johnson winning a decision over Ian McCall that would later be found to have been scored incorrectly with the fight ultimately ending up a majority draw. In the main event that evening, Martin Kampmann submitted Thiago Alves with a comeback guillotine late in the third round.

2013: Wanderlei Silva knocked out Brian Stann in the main event of UFC on Fuel TV 8. It was the last time either men have fought since, with Stann retiring and Silva having legal issues which have yet to see him return to the cage.

Here’s a hot take for y’all: whoever wins tomorrow between Khabib and Tony will be the best lightweight ever. Go ahead and spew your venom and hate at me.

And that’s all for this week. Before you go, check out this piece by Karim Zidan about the cultural significance of Khabib Nurmagomedov because it is excellent and well worth your time. Other than that, enjoy the fights this weekend and see y’all Monday.