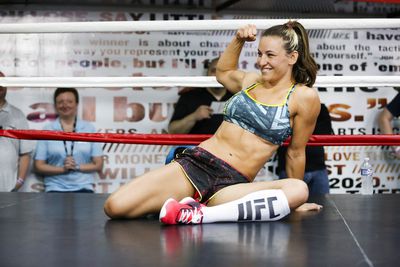 “This was another day in the office to them, but to me it’s like, ‘You just ruined my life,’ and I feel like they need to understand that a little.”

It sure doesn’t sound like Miesha Tate has moved on from losing out on her ill-fated third title shot at UFC women’s bantamweight champion Ronda Rousey.

Speaking with ESPN’s Brett Okamoto, Tate says her unwanted status as a gatekeeper has her questioning her future.

“[UFC president] Dana White will say I’m one fight away, and then in his next interview, he’ll say I’m a couple fights away,” Tate said. “I keep seeing different headlines come out, and I don’t know what to think.

“I fear that they want me to fight all the other top girls, and the connotation is that if they beat me, they get a title, but if I beat them, it’s ‘bring on the next one.’ Essentially, I feel like they have deemed me as a gatekeeper, and that’s fine for a while because I put myself there. I won and lost those fights. But there has to be some light at the end of that tunnel. If there’s not, what is my future ….View original article