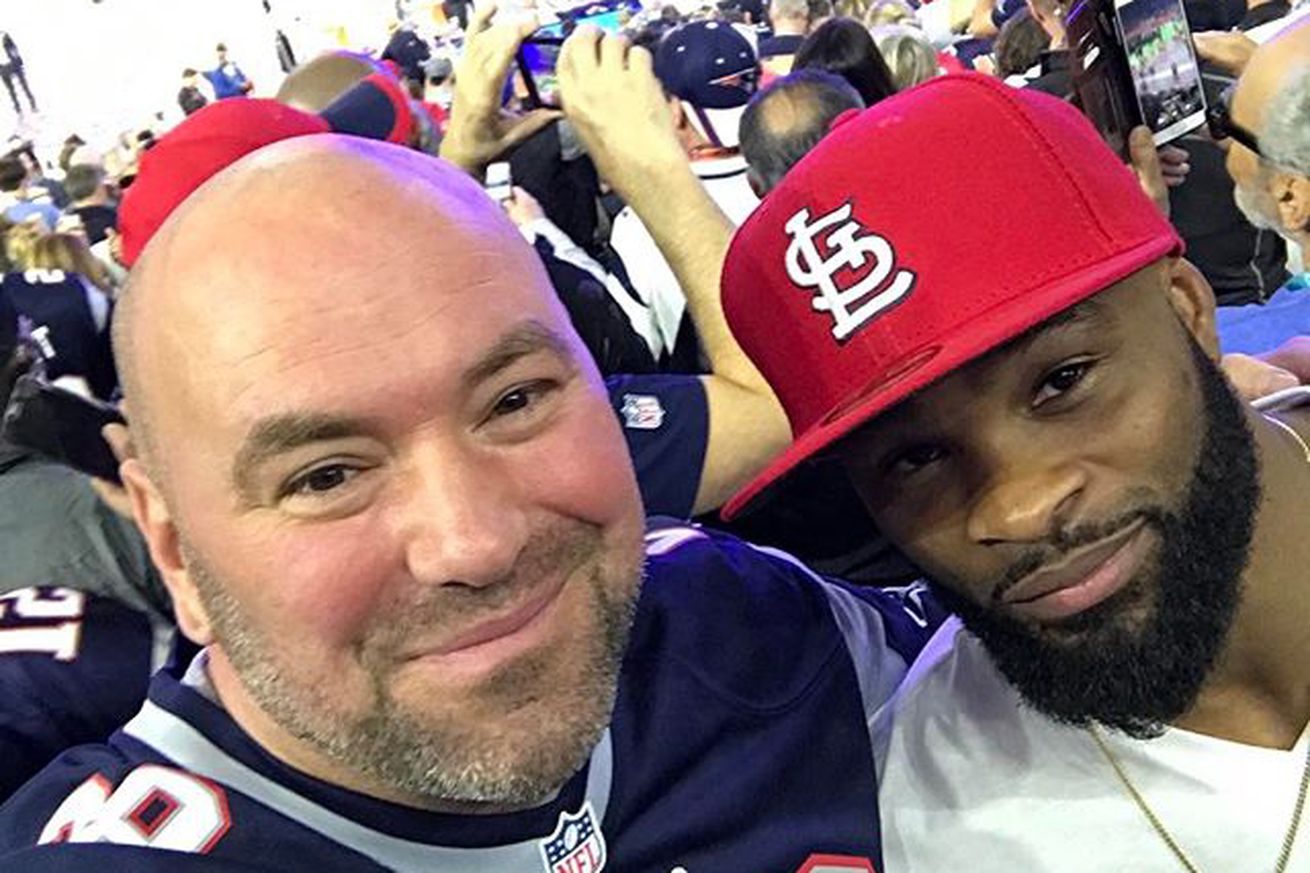 On Saturday in Houston, Texas, the Korean Zombie made his return to the octagon after 42 months away from competition, knocking out ninth ranked Dennis Bermudez in spectacular fashion in the first round. Unfortunately for him, KZ’s knockout wasn’t even the most incredible thing to happen in Houston that weekend.

24 hours after Chan Sung Jung punched out Bermudez, the New England Patriots completed the biggest comeback in Super Bowl history, beating the Atlanta Falcons in overtime in and ensuring that no one will be talking about the UFC around the water cooler at work today. The monumental nature of the comeback is all anyone could talk about last night, including many MMA fighters and especially UFC President Dana White. Check out their reactions to the big game below.

Me and my man @hairweavekiller with a little pregame smack talk. @patriots vs @atlantafalcons #superbowl

For real (via @WORLDSTAR) #SuperBowl pic.twitter.com/5ZBpJBH5sc

At the #Super Bowl hangin with the champ @twooodley

Here is @Jon_Anik soon!!! He may never talk to me again after this game. Could make the broadcast tough #RiseUp pic.twitter.com/oPAbjn52M2

This is where you reset Madden! #SuperBowl

Time to #RISEUP!!! Man, what a performance so far by the #Falcons. Still another half to go tho

What else is on?

Current mood:
The only one out of all my friends to put money on Atlanta #superbowl #wegoinsizzler #dirtybirds pic.twitter.com/v9soqU71LM

Can we PLEASE have Michael Jackson back for ONE more half-time show?! Amen!

[email protected] time for the come back. @rockwellwatches

#stephengostkowski was looking back like they have him the deflated football for that extra point after he missed…. lol #SuperBowl

Oh here comes the come back!

Why the #Falcons not killing the clock with 20 sec to hike the ball?? Yall not losing. Need to seal the deal, and give the no time to Pats!

Wicked with the catch! #SuperBowl

I’m not sure what is going on, but #Falcons PLEASE keep it together. 3.5 min of focus. Let’s go!! (I just don’t want the Pats to win again)

Of course the pats are making a comeback … wtf else is Tom Brady supposed to do besides win?

Im assuming this guy did the @AtlantaFalcons half time speech! #SuperBowl 51 pic.twitter.com/Ino00p2HT3

Are you kidding me @patriots vs @atlantafalcons is nuts!!!!! @danawhite came back to life! And his entire squad!!

Never had a doubt.

Come on joe. You were worried. Had to be. https://t.co/Yp78yYpRRB

Just won an easy $1000 from @Artj97. Big thank you and congratulations to the New England patriots

Dammit!!!! They got us!! But hats the Patriots! Extremely amazing Game!!! @patriots @danawhite guess I’m the good luck charm. @atlantafalcons sorry I wanted you guys to get that win so bad! #NFL @nfl @UFC #UFC

I guess I should have hedged at Half.

Smh these boys can mess up a wet dream

Anyone check the pressure of those footballs in the second half? #SuperBowlLI #ThugjitsuThoughts

My wife wanted to leave in the 3rd quarter and I told her we were still in it… I would have never forgiven her if she made me leave.

Wax on, wax off, @BrianStann! You’re on the clock.

A pleasure to honor this bet @jon_anik after watching the best to ever do it TB12 on that final drive. Incredible game. Proud of the Falcons

Results. UFC Fight Night: Houston went down on Saturday and here are the results.

Old interview but since this appears to be what the UFC wants and it’s Nate being Nate, give it a look.

Does anyone honestly think TWood is scared of Nick Diaz? At all?

All @ufc fans at work on Monday pic.twitter.com/FrvjPPM4Bs

Definitely okay if they make this fight.

@DominickCruz The things that you said in your press conference about ring rust really inspired me. Thank you!

The inspiration is mutual @KoreanZombieMMA. Congratulations on a beautiful victory while paving your own path https://t.co/e6ZDKxEp7v

Nathan ain’t feelin’ the offer. (Rumor is it was Eddie Alvarez).

Lol at your fight…

The UFC absolutely needs a W125 division but if you get diagnosed with a metabolic issue, maybe don’t try and cut weight. Look how it worked out for Masvidal and Cowboy.

What does this mean?

I am the ghost pic.twitter.com/O52sx2yvuq

@TheNotoriousMMA Paper Champ Who Thought U Could Walk Away From MMA #MoneyMadeYouSoftMcnuggets I Bet You Fade Like A Ghost. #Buster #ElCucuy pic.twitter.com/v0kG8ukS15

Jimmie has moved on from trying to get the Cruz fight I guess.

[email protected] vs @RaphaAssuncao let’s show the @UFC @seanshelby @danawhite how warriors earn title shots n put on the fight of the year!!

I love how the media always twists my words. I’m 100% a UFC fighter. @ufc @danawhite

Linekers for years to come.

2010: For the first time in history, two UFC Hall of Famers fought with Randy Couture submitted Mark Coleman at UFC 109. In the co-main event Chael Sonnen secured a title shot at Anderson Silva by winning a decision over Nate Marquardt.

I was born in Georgia and have lived most of my life here and let me tell you, I never had a doubt what was going to happen. Up by 25, I still knew. All the hallmarks of every single Georgia sports loss of my entire life. Mismanage clock/timeouts? Check. Get conservative down the stretch and allow them to build confidence? Check. Do a really great thing (Julio’s un-f**king-believable catch) and immediately follow it up with really horrible things (Sack + penalty to move out of field goal range which would’ve iced it). CHECK.

I’ve seen that movie 100 times before and will see it again 100 more. You want to talk about sports curses? Atlanta hasn’t one major sports title – the ‘95 Braves – and that was the lockout season so it’s got an asterisk. Heck even UGA managed to have Matt Stafford, Knowshon Moreno, and AJ Green on the same team and they couldn’t even win an SEC championship much less a national title. The State of Georgia is sports cursed and last night was just the latest showing of it.

Hope y’all enjoyed the weekend. Back at it this week for a little UFC history. Take it easy and see y’all tomorrow.