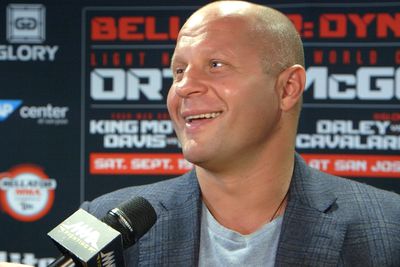 Fedor Emelianenko hasn’t fought since 2012, but the former PRIDE great says the break has done his body some good.

Emelianenko makes his return to fighting as the headliner of RIZIN’s debut event set to air New Year’s Eve from the famed Saitama Super Arena in Saitama, Japan.

“Compared with what it was like three years ago, I recovered from all injuries,” Emelianenko told Rizinff.com (via Bloody Elbow). “I was able to receive medical treatment for injuries that bothered me. You can decide after my fight [if I am better now].

“I think that you will not be disappointed.”

Emelianenko was famously submitted by now UFC heavyweight champion Fabricio Werdum under the Strikeforce banner in 2010 before suffering back-to-back TKO losses to Antonio Silva and Dan Henderson in 2011.

“The Last Emperor” rebounded later in 2011 with a unanimous decision win over Jeff Monson in Moscow before scoring a KO against Satoshi Ishii that New Year’s Eve in Japan. In 2012, Emelianenko blasted MMA great Pedro Rizzo in St. Petersburg, Russia, ending the Brazilian’s night in less than 90 seconds.

“I think he is quite a serious contender,” said Emelianenko. “Under the rules of K-1, he defeated Sergei Kharitonov. He is tall and heavy.”

Never really one to call his shot, Emelianenko says he’ll go with the flow against Singh.

“I do not make predictions. I will act according to the situation.”

‘I made a mistake and I’m paying for it.’ Anderson Silva says he never took any sort of PED and doesn’t have anything to prove to Michael Bisping or anyone else.