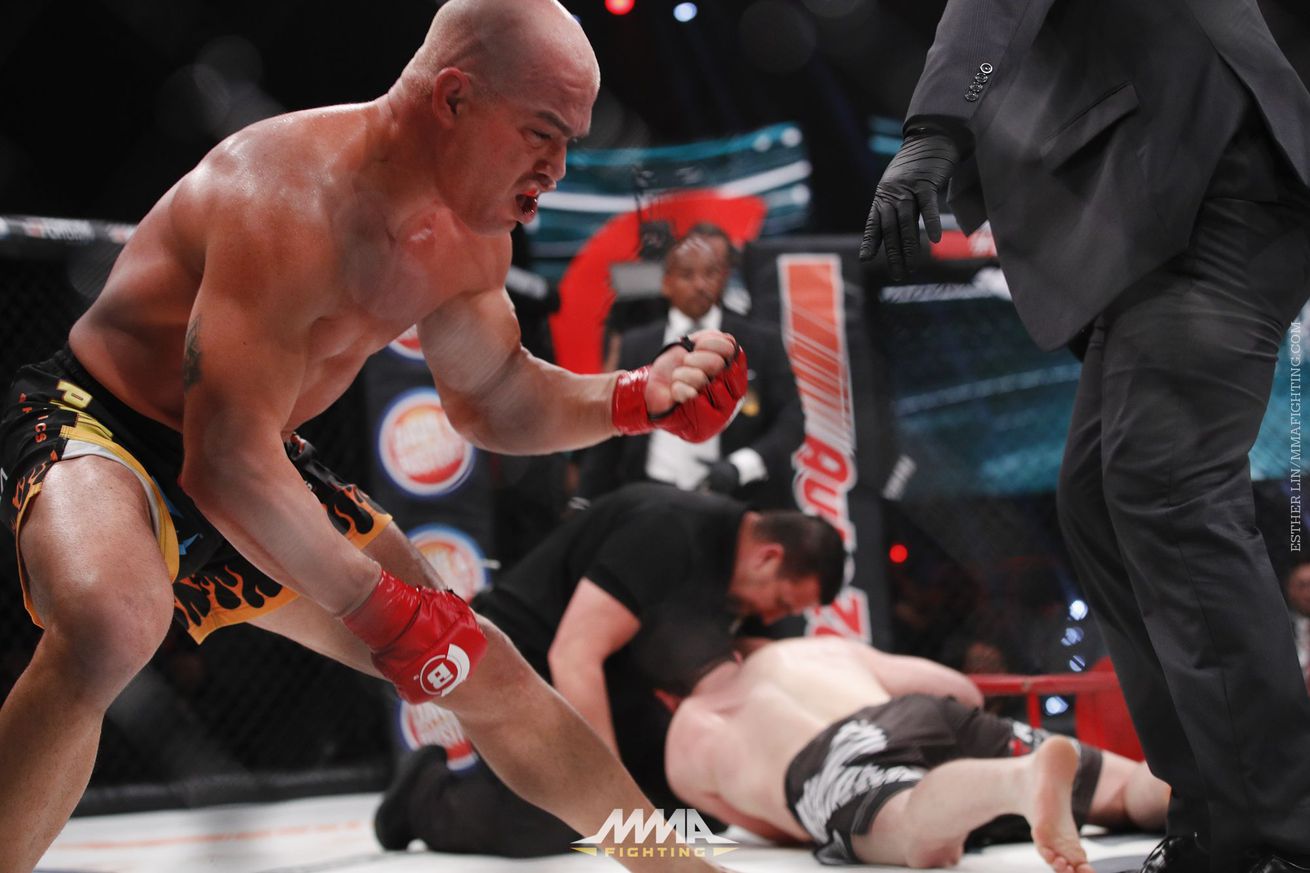 MMA is a sport where our heroes die hard (just ask B.J. Penn who was trounced by Yair Rodriguez two weeks ago). But every once in a while, things have a cheerier ending. Last weekend, UFC Hall of Famer and MMA pioneer Tito Ortiz got to hang up his gloves in style, submitting Chael Sonnen in the first round of the main event of Bellator 170. While it wasn’t the absolute apex of the sport, Ortiz did get to retire with an outstanding performance that was watched by almost 2 million people worldwide, a fitting end for one of the sport’s first stars.

But just because Ortiz didn’t get brutally beat into retirement doesn’t mean his exit was without controversy. After the submission, a contingent of viewers suggested that the fight was “fixed” due to the finishing choke being slightly askew from a normal rear-naked choke position. In a recent interview with Submission Radio, Ortiz responded to these allegations, calling the claims “ridiculous” and “disrespectful.”

“For people to say the fight was fixed, f**k that. It’s just ridiculous. Are you kidding me right now? I’m gonna give 14 weeks of my life, I’m gonna miss out on a Thanksgiving, miss out on a Christmas, miss out on a New Year’s to have a fixed fight? I’ve never been a part of that. If I wanted to do a fixed fight, I’d be doing WWE. For people to say that, that’s just very disrespectful, and for fighters to say that, that’s disrespectful, especially fighters that I’ve helped out through their career. It’s just disrespect.

“Believe me, I was squeezing him so hard. People saw how purple his face was. I was trying to make him go unconscious but McCarthy had to rip me off… He gave his back and I was dry – there was no sweat on me – and I was strong as hell. I squeeze like an anaconda… I was squeezing for dear life and I’m super, super, super strong right now.”

It wasn’t just fans who thought the fight was fishy. A number of professional fighters showed skepticism towards the result. Even UFC commentator Dan Hardy tweeted about the fight, calling it “choreographed,” though he later explained the comment as “fatuous” and “flippant.”

But the oddness of the finishing choke wasn’t the only point of contention for the conspiratorially inclined. There is also a clip from a moment earlier in the fight when Ortiz’s hand motions while caught in a Sonnen headlock. Some people broke down that sequence like the Zapruder film, claiming Ortiz tapped to signal to Sonnen to release the hold. Ortiz explained that he wasn’t tapping but “fighting the hands” and reasserting that the entire conspiracy is ridiculous and insulting.

“At the end of the day, when I step in that cage, I’m there to fight for my name. It’s not about money, it’s not about who’s gonna win or lose, it’s about me winning. That’s all that matters. Why would they set up Chael to lose if he signed a five-fight deal? It just doesn’t make any sense. And for someone to say that I tapped? People need to watch that and look at the position that my hands were at; I was fighting the hands. That’s what I was trying to do, fighting the hands. It’s nonsense.

“That’s just ridiculous. It’s disrespecting my career, it’s disrespecting my legacy and the hard work I put in, the sacrifice I had away from my children and my family. I sacrificed so much for this fight. That’s the best shape I’ve been in since 2006. I was shredded. I cut down from 225 [pounds] to 204.8 [pounds] in two and a half days. There’s nothing fixed about anything at all.”

Aside from the “fixed fight” controversy, Ortiz’s swan song was also marred by the former champion holding onto the choke after Sonnen tapped, forcing John McCarthy to physically pull him off of Sonnen. Ortiz admitted he did so out of “ill will” towards Sonnen due to the things Sonnen said about him before the fight and apparently Ortiz is still not inclined to let bygones be bygone. Despite walking away the winner and getting a bit of extra revenge by holding onto the choke, Ortiz says he still doesn’t like Sonnen.

“I dislike Chael. I still dislike Chael because he had the opportunity to apologize and he didn’t apologize. He talked personal stuff about me. The guy’s an asshole and he’s always gonna be an asshole.”

Tito Ortiz retires from MMA with a 19-12-1 record. He’s a former UFC light heavyweight champion with five successful title defenses and is currently tied for most fights in the UFC with 27 alongside Michael Bisping and Frank Mir.

Rematch. Daniel Cormier vs. Anthony Johnson 2 is set for UFC 210.

NODAPL. An activist talks about Ronda Rousey showing up to the Dakota Access Pipeline protest.

911. Listen to the disturbing audio of the 911 call for Cody East’s domestic violence arrest.

155. Sage Northcutt is returning to lightweight after brief foray at welterweight.

A day with Firas Zahabi.

This poster got torn to shreds yesterday.

I got the exclusive! The Official #UFC209 Poster! See you in Las Vegas! @ufc #andStill pic.twitter.com/sPbQMX4NxZ

And here’s why. Infinitely better.

@Bosslogic wow!!! @ufc Looks like you have some competition! pic.twitter.com/kUtwduZcuI

Or this one which the UFC did at least.

#Halifax we in this h** pic.twitter.com/WGjngJkjBL

I was joking. I love @JohnMcCarthyMMA but I almost hit him with “The Tito Torpedo” lol. https://t.co/HL5uYbkbfY

@bisping I hope you have a good surgery and a speedy recovery. I see you in May boi #ynuevo

I don’t know what this means.

We asked UFC Champion @bisping a question we probably shouldn’t have asked… pic.twitter.com/XCqUmrRfn4

Stephens wants to welcome Gil to 145.

NEW: The @UFC’s @LiLHeathenMMA wants to scrap it out with @GilbertMelendez at 145!

What do you think of the potential matchup? pic.twitter.com/8usHSNQ80K

My daughter decided it’d be a good idea to carve her name on the side of the minivan with a rock.

2013: Demetrious Johnson faced arguably the greatest scare of his flyweight career, almost getting knocked out by John Dodson before surging back to win a unanimous decision at UFC on Fox 6.

Wake up sheeple. Tito totally tapped and y’all just don’t see it because you aren’t blocking out Scott Coker’s brain wave modifiers with tin foil hats. Sure, Chael has been submitted 8 times before and was coming off a 3-year layoff and looked to be 20 pounds lighter than Tito, a man who took Bronze at ADCC, but it was definitely fixed.

(*I hope everyone can tell that is sarcasm. Go watch Luke’s MMAnalyst if you actually think this was a worked fight.)

Take it easy y’all. Until tomorrow.