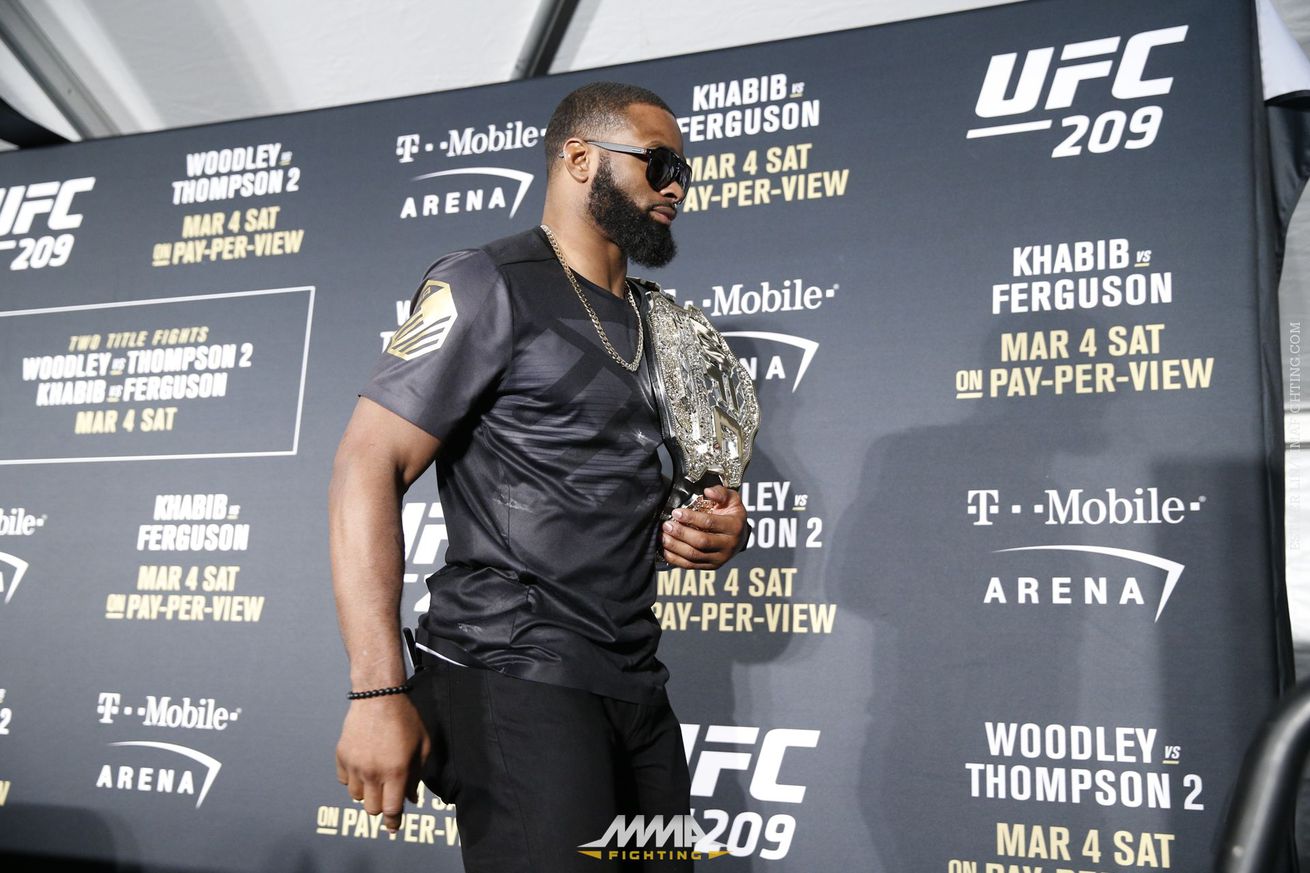 UFC welterweight champion Tyron Woodley and UFC President Dana White have had a publicly tumultuous relationship over the last year with Woodley voicing displeasure over the way the UFC has treated him, and White brushing off Woodley’s claims and calling him “a drama queen.” But the two had seemingly returned to a happy relationship with White and Woodley attending the Super Bowl together and the two of them joking about the “drama queen” comments together. But that happy time may be coming to an end soon.

On Saturday, after Woodley retained his welterweight title with a narrow decision win over Stephen Thompson in a fight widely viewed as miserable, White declared that he believed Thompson should have won the bout. White also criticized Woodley’s performance and the overall quality of the fight.

Yesterday, speaking with TMZ Sports, Woodley responded to White’s criticism, reiterating his complaints with the way the UFC has treated him as champion and threatening to do something about it.

“Dana White thought I won the first fight but he didn’t publicly come out and say he thought I won the first fight, so I thought it was a bit distasteful for the promoter to say he thought [Thompson] won the fight. That’s like me coming out and saying as a fighter that I don’t think he didn’t do a good job of promoting the fight. Which I don’t. I don’t think they’ve done a good job of promoting me as champion.

“Have you ever heard of a commissioner going off on a [judge] for — ‘Oh man, he should have never awarded that 10-8 round.’ Have you ever heard that before? Why in my fight would the person do that when, in fact, the 10-8 round did not fix the outcome at all. The person that gave the 10-8 was the person that gave the draw. So why would we be making such a huge travesty on that? They should have did that in New York.

Never one to back down, White responded to Woodley’s comments with TMZ Sports, doubling down on his assertion that Woodley’s performance was lacking and advising the champion to slow his roll with the threatening talk.

“Tyron Woodley came out and said he was going to destroy Thompson and there would be no question he was the champ. Well guess what? There’s questions again.

“Let me tell you what…when you have a performance like you did at 209 and you get booed for 5 straight rounds and then people are booing so loud you can’t even do your interview, you should probably just take your lumps and move on. Get your next fight as fast as you can and try to put that performance behind you.”

“There’s one guy around here who calls the shots and as soon as you learn that, the better off you’ll be.”

Cody Garbrandt has a Geico commercial.

TMZ Sports has really gone in on MMA.

Decent fan made promo for Aldo-Holloway.

Jacare isn’t too happy either.

If you want to ask who will be the next one, ask me, because I will fight! Luke is running, I know it. Bisping is a disaster for the division, because he doesn’t want to fight no one. The more time you let me waiting, the worst will be, because I will come back more trained. Nobody will frustrate my dream. My dream is to be the world champion and nobody will stop me. @canalcombateoficial @reebokbrasil @reebok @usinadecampeoes

Open scoring announced at the end of each round is a possibility to think about. It would add drama if we knew a fighter needed to finish.

They do it in @_PANCRASE_ and I find it helpful as a cornerman. https://t.co/cyMMTysDsn

@Ealvarezfight Don’t act like you don’t know me, I’ve finished more guys in the UFC than you, 5x bonus earner, you have 5 total fights.

@Ealvarezfight I won the hardest season of TUF, ranked #8 at LW. I’ll find a new opponent for May 13th since you don’t want none.

You hear that, @CMPunk? Let’s prove them wrong. https://t.co/XcIw2wEcJd

Doubt this would happen but I’d like to see it.

Do away with show and win and make it one purse. Fighters afraid to only get half their pay. Guarantee full pay and you’ll see a change. https://t.co/m2FGRe7ytL

@EliasTheodorou I’ve said that for years. Fighting for a win purse is like walking a mile on a tight rope with an egg on a spoon.

There is a legendary photo. My man. The one and only. pic.twitter.com/uDpN4m0hrS

That’s it for today y’all. Have a good one and I’ll see y’all tomorrow.