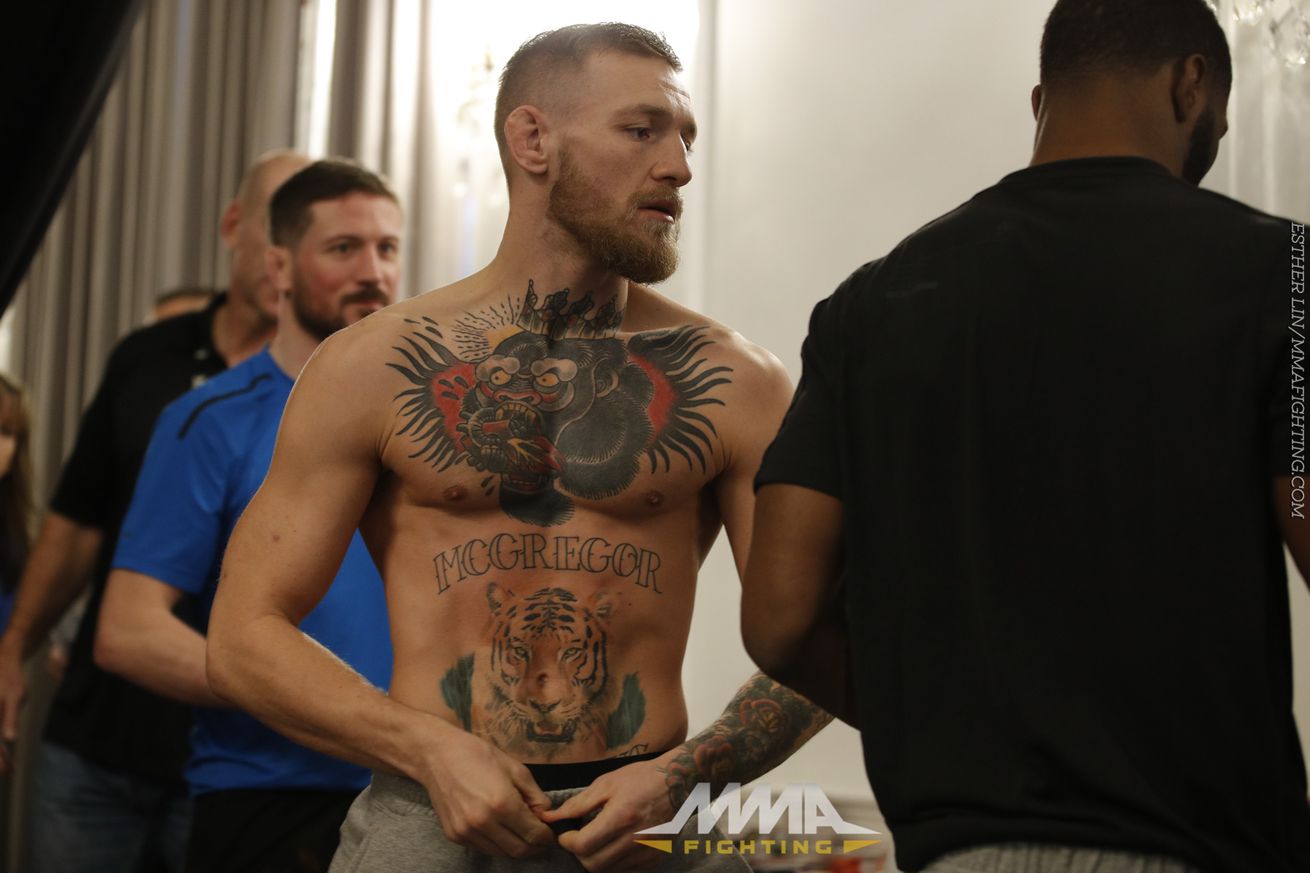 UFC 205 was an interesting experience for Tyron Woodley. He was declared a winner after his co-main event fight with Stephen Thompson, but was then informed the result was actually a majority draw meaning he still kept his belt but he didn’t win the fight. Then just a few minutes later he had to give up his belt, temporarily, so the UFC could provide Conor McGregor with a second belt for pictures after he knocked out Eddie Alvarez in the main event to become the UFC’s first simultaneous two-weight champion.

Woodley’s belt was eventually returned to him but in the post-fight press conference that evening, when McGregor found out whose belt it was he commented that maybe it was “a sign of things to come.” That little remark laid the foundation for a potential McGregor-Woodley superfight next year, something Woodley hasn’t shied away from and something McGregor had possibly been planning for. After all, at their official weigh-ins before the event when both men were milling around the event area, McGregor stared down Woodley in what Ariel Helwani described as “sizing Woodley up.”

At the time, Woodley didn’t make a big deal out of the encounter, and in a recent video he posted to his YouTube account, he explain why he didn’t and his feelings on the situation, before renewing his offer to give McGregor the opportunity to become the first three-division champion in UFC history.

“When he got in my face and I looked at him I said, ‘what’s up?’ At that moment he realized I ain’t that dude. I’m really about that life. I’m really from that life. My family is from that life. I’m actually one of the sharper tools in the box that haven’t been in the streets like that but I have family members, close loved ones, that that’s all they know. So I’ve been around that a lot and I try not to take myself back to those dark areas, I try to stay sophisticated, stay professional but a few people can take you out of that element and bring that Ferguson back out of you and he almost did it. But I had to keep my eyes on the prize, defend my strap in a Fight of the Night performance at UFC 205.

“Now that we got that done – that’s off the table – if Conor want it he can get it. He knows how to get in touch with Dana [White, UFC President], he knows how to get the contract set, and he really don’t want to fight. I’m not saying he should want to fight because I’m not a little dude. I ain’t Nate Diaz. Nate Diaz is not a welterweight. He did not do well at welterweight because he was undersized and these dudes are real gorillas in this weight class.”

Woodley won the welterweight championship by knocking out Robbie Lawler at UFC 201 earlier this year and has a 16-3-1 record in the weight class. McGregor has only competed twice as a welterweight, both times against the current sixth ranked lightweight Nate Diaz, going 1-1. The bulk of McGregor’s UFC career has come at 145 pounds, two weight classes below Woodley, and Woodley invokes this information as a warning to the former featherweight champion, saying he will bloody McGregor up and even offering to do it in Ireland if McGregor would like.

“If him and his coach John Kavanagh and everybody think that Conor can do well against me and they gas this dude up – you know, he’s a dope fighter but there’s levels to this. When you start going up, it’s like me going up to 205 and challenging guys at that weight. When you come up to this weight brother, it’s real power, it’s real people that will put real hands on you, that’ll put you down to the canvas and you will not get up unless I let you up.

“So if you want to get in there with a lion and get your head bit off and have me spewing your blood all over the octagon while you’ve got that goofy tiger tattoo on your chest, looking like a clown with a clown on your chest, we can do it. We can do it in Ireland, Dublin, we can do it in the back of White Castle, I don’t care. But just know, I ain’t that guy. I don’t like to try and act overly hood or overly ghetto, a million hood stripes, but where I’m from you don’t call me a bitch, number one. Number two, you don’t fake like you’re about that life. If you want to scrap, if you want to make this money, let’s do it. If you don’t, shut your mouth. Just do your thing.”

McGregor has been saying for years that he wants to bring the UFC to Ireland to sell out a stadium show at Croke Park in Dublin. It’s an 82,000-person arena that McGregor would likely sell out regardless but an unprecedented fight like McGregor chasing his third belt in a third weight class would be the exact type of marquee event the UFC would want for their first true stadium show.

It’s also the exact type of event Woodley has been working for. Since becoming champion he has been angling for big money fights against Georges St-Pierre and Nick Diaz. But if it doesn’t happen with McGregor, Woodley says he’s fine. He has loftier goals than chasing down a fight with MMA’s foremost call out target.

“I want you guys to realize this about me, I’m not one of those guys that’s trying to position myself off Conor. I actually got no beef with Conor. He doing his thing, he’s getting what he want to get out of the game and I’m getting what I wanna get out of the game. But it’s a few people that you can step to with that BS and it can slide, I just so happen to not be one of those guys.

“I ain’t trying to build myself off Conor. I’ve got legendary ideas about my career. I want to be a great. There’s about four or five more people I’ve got to beat to solidify that position and that’s my focus and that’s my goal. If he wants to be a stumbling block that gets me to there faster, so be it.”

Waiting. Jessica Andrade is still waiting for an opponent for UFC 207 in ten days.

Get her groove back. Cody Garbrandt believes Paige VanZant will “find her groove” in the UFC.

Big John on the new rules.

Garbrandt gets crap but this is genuinely a dope thing.

And Waterson on TMZ.

Dude got real Spielberg with it.

Khabib and Tony, back at it again.

@Danawhite Must’ve Paid You Good With Your New Deal! You’re Being Fairly Paid, Now It’s My Turn. I Want This Fight, But Won’t Take Peanuts https://t.co/YhKG0Wq8fo

I can take it at a catch weight @arielhelwani

@ufc offered u the fight days ago, @ChrisWeidmanUFC . Suddenly u have disappeared. Accept the fight already. I am waiting,Pal.#DontBeScared

Easy, Pal. You were just one of a few names given by @UFC, and I’m still healing up. Glad you’re finally speaking, though! https://t.co/TVPH6KWWfi

I am working to get the belt. If the top guys won’t accept I am prepared to take volunteers. @ufc @arielhelwani

@RJWhittaker1990 said he wanted to fight me next. When @ufc gave him the chance, he needed to go on holiday. When does the vacay end? @ufc

Plenty of other spots yet to announce….

All I want for Xmas is to fight on @InvictaFights Jan card..

Something really touched my heart this morning I was talking to @cody_nolove about giving maddux who’s a kid who’s been part of codys career since amature days and he survived cancer. Maddux is now cancer free and has been part of codys journey. As you see in the text I asked Cody if he wants me to ask the ufc to give the kid a replica belt after he wins and he said no ill keep the replica. Give the kid the real belt. Stuff like this truly inspires me and I’m grateful for people like Cody who always think about others before himself. @ufc 207 #andnew

Be easy everyone. See you tomorrow.

Poll
If they fought, who ya got?