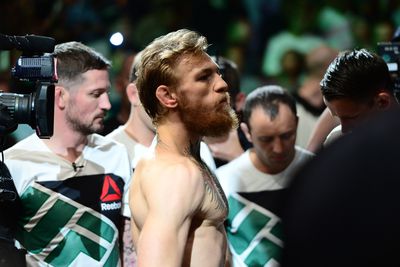 Internationally-recognized movement expert, Ido Portal, trained “Notorious” back in early November on bettering his movement, which will ultimately have an impact on the success he has versus Jose Aldo this upcoming Saturday night.

Conor McGregor might be more obsessed with movement than he is in perfecting his mixed martial arts (MMA) weaponry.

Regardless, the two go hand-in-hand, according to movement coach and pioneer, Ido Portal, who worked with the Ultimate Fighting Championship (UFC) interim Featherweight titleholder back in November.

Portal specializes in helping athletes of all kinds become more fluid, so a pairing with the self-proclaimed “master of movement,” McGregor, made much sense prior to the latter’s title unification headliner opposite Jose Aldo at the UFC 194 pay-per-view (PPV) blockbuster on Dec. 12, 2015.

As “Notorious” attempts to unify the 145-pound strap, Portal spoke with MMAmania.com and discussed how McGregor is changing the MMA game, how he competed with a majority of his ACL torn at UFC 189 and his rangy kicks, defeating Aldo and much more.

How did the partnership with Conor come about?

IP: Conor has been following me for a while actually and looking at my videos and studying from afar and listening to some of the interviews and ideas, ….View original article