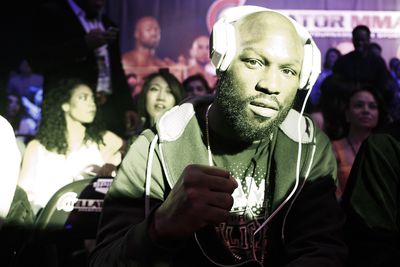 The news comes after the withdrawal of Lawal’s original opponent, Mark Godbeer, due to injury.

The Englishman McDermott comes into his bout opposite King Mo with a 5-2 record (four knockouts), going 2-1 in his last three under the BAMMA banner. McDermott first made a name for himself in the world of sports as a professional rugby league footballer, most notably representing England’s Barrow Raiders.

He retired from the sport in 2011 after testing positive for anabolic steroids.

King Mo (16-4, one no-contest), meanwhile, has won four straight, last defeating Linton Vassel at Bellator 142: Dynamite 1 Sept. 19. While the 34-year-old fighter contested the majority of his career at light heavyweight, he does have prior experience north of 205 pounds, most recently besting former UFC heavyweight Cheick Kongo via split decision at Bellator 134.

In a press release, RIZIN FF also announced a matchup between Bob Sapp and sumo wrestling legend Akebono Taro for their Dec. 31 event. The bout, which will be contested under Shoot Boxing rules, serves as a rematch to their 2003 tilt, which ….View original article