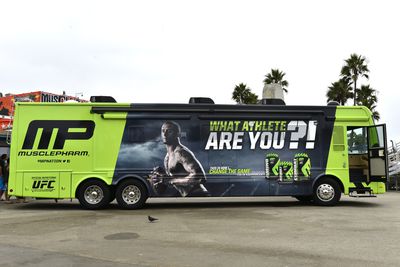 Besides, the world’s largest mixed martial arts (MMA) promotion is still on its honeymoon with Reebok after entering into an exclusive fight week agreement back in July (for better or for worse). That may explain why MusclePharm is looking to use its sponsorship bucks a little more fruitfully.

From today’s letter to shareholders:

We have applied the same scrutiny to our sponsorship and endorsement agreements with athletes, celebrities, and sporting organizations. While we believe that our old model of agreements with these partners helped to boost our credibility by increasing exposure toour brand, we also need to be mindful of the costs associated with these arrangements as compared to the return on investment.

One example of our new model is our recent sponsorship of Team Elevation, a mixed martial arts team. We previously had a traditional strategic sponsorship agreement with Ultimate Fighting Championship in which we received brand and logo visibility. So while we will continue our association with combat sports, I made the decision to sponsor a mixed martial arts team, instead of continuing with our traditional sponsorship of UFC following the conclusion of our agreement. In addition to being ….View original article