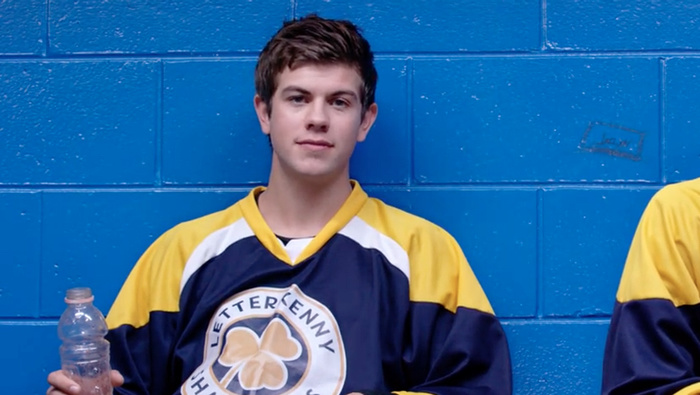 In today’s My First Fight, we talk to Andrew Herr, who plays Jonesy the hockey player on Letterkenny, about the fight that actually made him realize the exact opposite of all of those things.

When we explain the concept of My First Fight to Andrew Herr, he offers an alternate take on fight-related epiphany: What about the scrap that makes you think “or maybe I shouldn’t?”

That’s the enduring lesson that the actor has taken away from his first serious encounter with physical violence, a short but intense brawl that broke out during a game of Bump Basketball when he was in the seventh grade. “We were playing and I bumped this guy’s ball and he went up to me and twisted both of my nipples really hard. And I just snapped, and we started punching the shit out of each other. I ripped his shirt. We both ended up crying like babies,” he recalls. “It was just pure rage.”

After maybe a minute of this spectacle, their teacher broke them up and turned the experience into a teachable moment. “We were still mad at each other and they made us go to the front of the class and explain why [what we’d done] was wrong, and that’s when we started crying, because it was embarrassing. And his shirt was ripped and he had a bloody eye and a bloody nose and I had hurt nipples. It was just a shit show, really.”

The spectacle of two bloodied and broken boys sobbing in front of their classmates turned out to be a pretty effective PSA about the perils of street (or playground) fighting—at least for one of the boys involved. “It worked… to an extent. Then I fought again,” Herr laughs.

None of those subsequent fights filled him with the rage of that first experience, though. And most of them have happened in at least somewhat controlled environments. In arenas and on the ice, for example. “There’s a honor code in hockey fights,” he says. You can still end up with a busted face, “but you’re not going to get kicked our knocked down when you’re unconscious already. Street fights tend to have that element.”

He’s also trained in Muay Thai and jiu jitsu, and spent four years boxing under the tutelage of NABO champion boxer Syd “The Jewel” Vanderpool at the Boxing By Syd Athletic Centre in Kitchener, Ontario. Herr was mostly interested in boxing because the cardio helped his hockey career, but he did dabble in some sparring. The first—and only—time he faced a real fighter at the gym was another an exercise in humility, though. “I can’t remember his name, but Syd had this guy from Trinidad and Tobago who actually went into the Olympics, and his sparring partner wasn’t there. I was pretty decent at boxing but I was never good or anything. He put me in there with him…” Herr remembers with an anguished groan. “Going against someone who actually knows what they’re doing. That guy worked me. That might have ended my sparring days, to be honest. I didn’t hit him once and he just pummeled me. And he wasn’t even trying, either, it was like light taps.”

Although he appears to have developed a reputation as a tough guy among some of his Letterkenny cast mates—Jared Keeso proudly told us that “Herrsy outmaneuvered a dude with a knife on the lawn of his frat house and choked him out not that long ago” during his own My First Fight interview—Herr is quick to downplay both the story and his general prowess.

“I’ve got to clarify: I didn’t outmaneuver a dude with a knife. I was one of the people who was fighting. It was literally ten versus three. These three guys came in our frat house and they were being inappropriate. One guy knocked my friend Mitch out and he said he had a knife, so a bunch of us converged on him and I just put the guy in a choke and put him to sleep,” he explains. “But I’d say that I don’t like to fight anymore. I definitely had a nasty streak to me, but I knew that I was never going to outmuscle a guy, so I was pretty smart about it. I’ve had a number of fights and I don’t think I have legitimately lost one. I’ve had tied—a lot of ties, maybe—but I’ve never lost. But I would say I’m pretty soft now and if anyone challenged me, I’d probably be like ‘You win!’ and walk away. The fighting days are over for me.”

After everything he’s been through, the lesson that he’s learned isn’t that much different from the one he espoused when he stood in front of his class with his bruised nipples and bruised ego, all of those years ago: “You’re either icing your face or you’re icing your knuckles. Nobody wins.”

Season two of Letterkenny premieres on CraveTV on December 25. Season one is available on iTunes now.