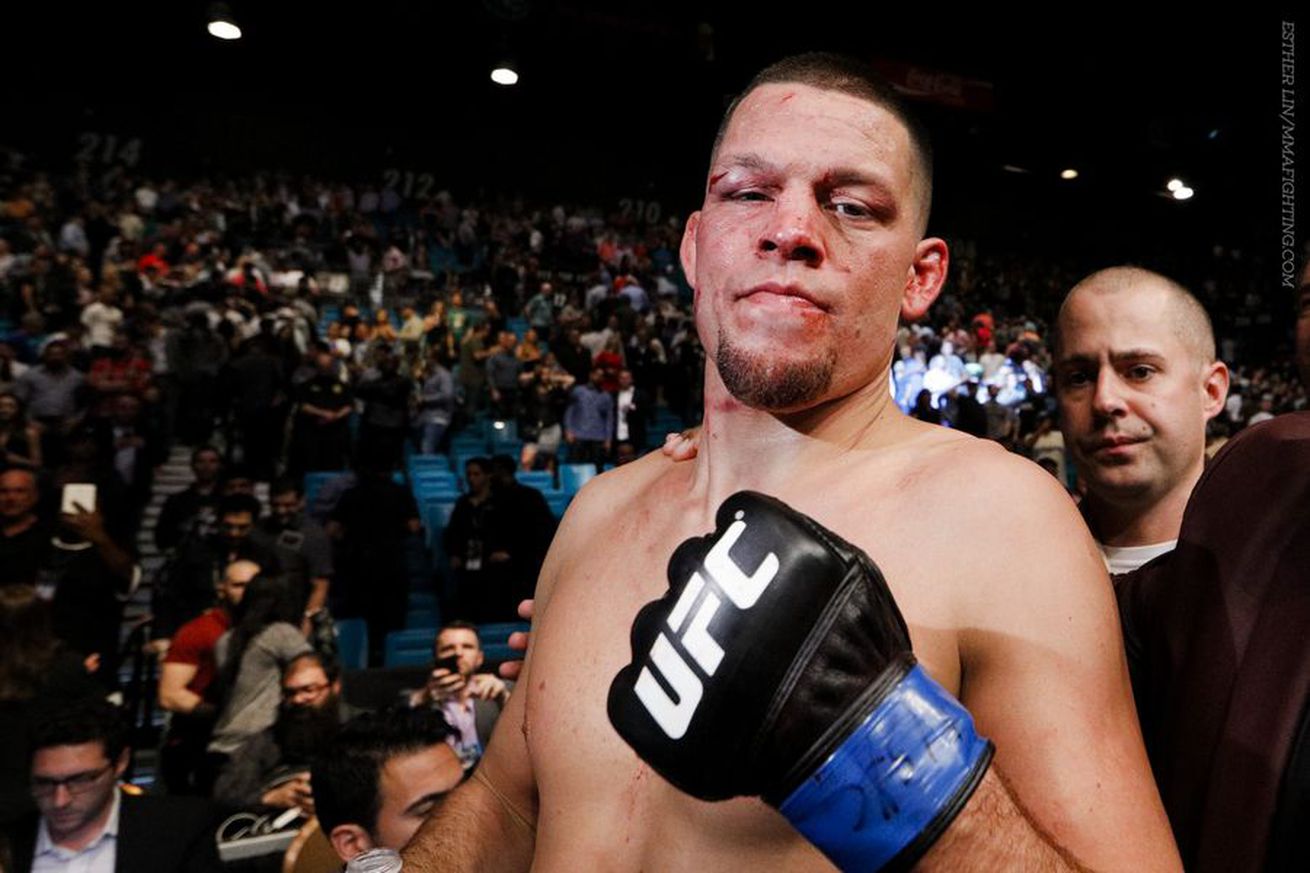 Nate Diaz hasn’t been seen much in the MMA world since his blockbuster Aug. 2016 rematch against Conor McGregor, but he’s certainly found his name in the headlines.

Diaz has been the subject of multiple callouts from Tony Ferguson over recent weeks, and on Wednesday, Diaz revealed the UFC offered him a fight against Ferguson for July 8 at UFC 213 — a fight he initially accepted, before changing his mind due to the “circumstances” of the deal.

“I said, ‘right now I’m in (triathlon) race season, but if you want to pull me out of race season, yeah, let’s do it,” Diaz said on a special Wednesday edition of The MMA Hour. “But you’re going to have to reach my number.’”

Diaz indicated that number was never reached, and ultimately he turned down the offer after giving the situation further thought and hearing Audie Attar — the manager of both McGregor and Ferguson — imply on a recent episode of The MMA Hour that the best way to get McGregor interested in a trilogy bout would be for Diaz to fight Ferguson for the interim UFC lightweight title.

“They’re trying to pressure me to fight Tony Ferguson, but what the f*ck, I’m going to cover for Conor McGregor and do his work while he’s out making f*cking millions of dollars fighting boxers and sh*t?” Diaz said.

“I’m not covering for you, bro. You guys fight each other. I heard Tony’s manager talking, saying that I need to get a fire up under Conor McGregor’s ass if I want to fight him for the third time. Like, I gotta do what? You guys should fight each other, motherf*cker. You guys have the same manager. You guys are working together against me. You guys need me to do the work for you? F*ck off.”

Diaz went on to say that the trio of McGregor, Ferguson, and Attar were simply trying to use him as a pawn to increase Ferguson’s profile and set up a bigger fights down the road for Attar’s clients.

“I ain’t asking for no money fights, because you know what? I am the money fight,” Diaz said.

“That’s why they want me to fight Ferguson. Conor, Ferguson, and his manager’s plans are like, ‘okay, no one knows Ferguson. Nobody. And he’s tough. So what we’ll do is, we’ll have him fight Nate, and then if he wins, everyone will know him because he fought Nate. Then [Conor] could fight someone who everyone knows. But if you fight Conor right now, then Conor gets his ass whooped by somebody no one knows.’ So, that’s where I’m at. I’m like, dude, yeah right. Fight each other, motherf*cker. You get a chance at your boy here. Your manager needs to get paid, so you guys better do something. I don’t got to pay nobody.”

Diaz also dismissed Ferguson’s recent attempts at trash talk as contrived, saying it was something Ferguson was asked to do in order to help pressure Diaz into the fight. And Diaz simply isn’t buying it.

“Someone told him to do that,” Diaz said. “He’s got respect. Tony’s not bad. He’s got respect and I respect that. He didn’t come off ever talking sh*t. He’s doing what he’s got to do because they’re telling him (to talk sh*t), but I’m like, bro, we don’t need to be fighting. You’re over here f*cking having people get you a fight? You’re just trying to move forward and say what you think you need to say. But you don’t need to say that. Do what the f*ck, go fight Conor’s ass. But you guys work together so that’s not going to work. You guys are all in cahoots.”

Diaz added that he was content to stay busy on the triathlon scene and enjoy his life until something worthwhile piques his interest or the UFC steps up its offers.

“But if that motherf*cker jumps up on the table in a corner of the cafeteria and says, ‘what’s up, motherf*cker? You sorry ass little b*tch. Want to get your ass whooped? What’s up? Come get it.’ I want to fight that guy. You know what I’m saying? That’s the guy I want to fight. But until then, I don’t have no reason to fight nobody.

“If we are going to fight, then I need to be woken up,” Diaz added. “Spit it and spit it loud. I lent them the blueprint, but people need to step their game up. Like, Ferguson talking all that mess (on Twitter)? You had the mic all those times, but what happens? His manager, which is Conor’s manager, told you ‘this is a good idea, go talk sh*t.’ Everybody’s talking all this sh*t nowadays too and trying to get loud at press conferences and argue in interviews. But it’s not real. It’s not real.

“Tony is talking this sh*t. Like, it’s not very genuine. I’m not going to buy that. I’m not mad at you, Tony. He’s doing his thing, he’s doing what he’s been told to do, but at the same time, you’re not making it very motivating for me to fight you.

“Not just him specifically, but everybody. It’s time to step your games up, and do it for real too, not f*cking phony style.”