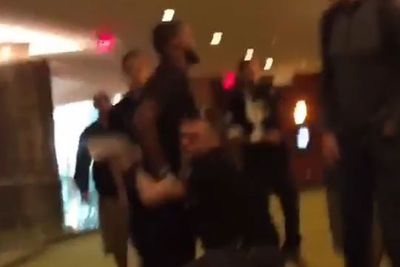 Nate Diaz and Michael Johnson face off at Saturday’s UFC on FOX 17 event in Orlando, but had to be separated after Diaz shoved Johnson.

UFC middleweight Tamdan McCrory, who faces Josh Samman in the same event, posted a video of the heated encounter between Diaz and Johnson on Friday morning.

“I have heard about this happening but I didn’t believe it until I saw it with my own eyes,” McCrory posted on his Instagram.

Sources close to the situation told MMAFighting that it all went down when both fighters kept walking by each other before medicals, and then it was quickly broken up.