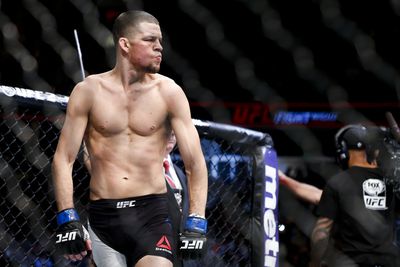 Fight game parallels are oftentimes dubious, and this one might not be any different…but when Donald Cerrone comes crashing down to earth, it just seems like Nate Diaz is (always) right there next to the hole he left in the ground.

The last time “Cowboy” had a long winning streak snapped came back in Dec. 2011, when he absorbed a record number of shots from Diaz after winning six straight. Four years later, Cerrone saw his eight-fight win streak come to an end against Rafael dos Anjos, this time in a title fight. Once again Diaz was on hand, redirecting attention unto himself. Diaz out-struck (and out-taunted) Michael Johnson for 15 minutes to come roaring back to life at 155 pounds. He even put the Stockton Slap on him, the same he whapped Cerrone with back in the day.

The crowd in Orlando couldn’t get enough of him.

Just as Cerrone saw two years worth of momentum disintegrate in 66 seconds, Diaz — after recording just a single victory in three-and-a-half years — was calling out none other than Conor McGregor. It was supposed to be Cerrone welcoming McGregor up a body weight. Try as we might, we can’t keep the story lines straight.

How does it happen? In the fight game fates change faster than the arms can be raised. We’re all morphologists, studying one face as it transforms into another. But it’s more than that, too. Never has this been illustrated as well as it was on Saturday night, when Diaz showed how easily our collective imagination gives over to vivid scenarios. Even if Diaz was saying he was the money fight for McGregor all week, we didn’t really believe that a Diaz-McGregor fight was even a thing. It probably isn’t. But it’s fun to ….View full article