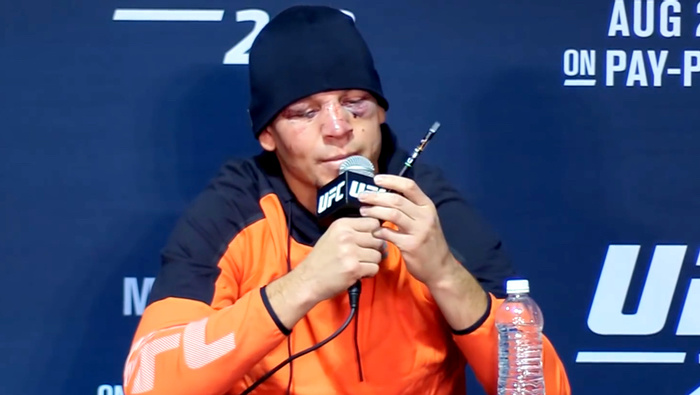 Just when you’re beginning to think there’s no justice in this world, and no decency or beauty either, something appears from out of the clouds to give you a little hope: just a little something to get you through.

Last month, after his five-round classic with Conor McGregor, Nate Diaz answered questions at the post-fight press conference while vaping, likely a first for MMA. Asked what was in his e-cigarette Diaz admitted it was cannabidiol oil, or CDB, a non-intoxicating compound found in marijuana.

“It’s CBD,” Diaz said. “It helps with healing process and inflammation and stuff like that. So you want to get these for before, after the fight, training, It will make your life a better place.”

Now, in a reasonable world that admission would have been the end of it. Diaz had just put himself through hell for 25 minutes, a hell manifested on his face in the form of bruises and cuts and eyes all but swollen shut. And he had done so in the service of what we know now was the biggest pay-per-view event in UFC history. If anyone deserved a little healing it was Nate Diaz.

But cannabidiol is still considered a Schedule I controlled substance by the federal government, and while the Drug Enforcement Agency recently eased restrictions on Food and Drug Administration-approved clinical studies investigating the compound for medicinal value, the FDA does not, contrary to some reports, classify cannabidiol as a dietary supplement. CBD is an active cannabinoid, and cannabinoids are on the World Anti-Doping Agency’s list of in-competition banned substances. And the timeframe for an in-competition violation extends six hours after the end of a fight, during which time Diaz was caught on video doing his vaping.

And since controversy follows the Diaz brothers as sure as night follows day, immediately after that ….View full article