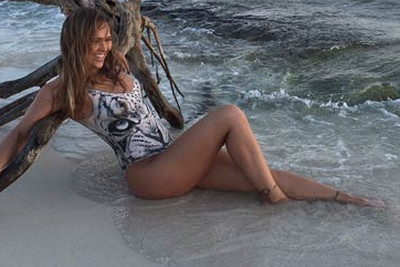 The real Roxanne once promised to make you feel hotter than it is in Grenada. That could be a pretty tall order now that Ronda Rousey is there, heating up the beach in her birthday suit.

It’s official! @RondaRousey will wear NOTHING BUT BODY PAINT for #SISwim2016. https://t.co/B08z7Ameh0 pic.twitter.com/fZ6lzYvr6F

Back for her second year, Ronda Rousey will join an elite club of body-painted swimsuit models in the 2016 SI Swimsuit issue. Yep, you read that right. Ronda will wearing NOTHING BUT PAINT on the pages of our magazine next month. So what could be better? Well, as it turns out, the beach in Grenada where we shot Ronda’s gorgeous photos is public, so some eager paparazzi got a few early snaps. That means Christmas is coming again, folks! We’re sharing a few BTS shots that are sure to tie you over until our official images of Ronda hit newsstands next month.

Rousey is slowly but surely coming out of hiding after last November’s knockout loss to Holly Holm. In fact, the Olympian has even agreed to host Saturday Night Live (SNL) on Jan. 23, 2016 on NBC (more on that here). I guess that’s one way to keep busy during her self-imposed hiatus.