Home MMA News Nick Diaz: Georges St. Pierre was on steroids when I fought him, so he needs to give me a rematch
ShareTweet 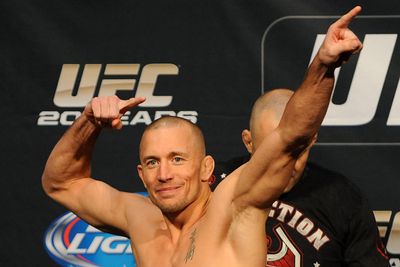 Former Ultimate Fighting Championship (UFC) welterweight champion Georges St. Pierre was privy to a Canadian loophole when he weighed in for his UFC 158 title fight against Nick Diaz (proof), which took place nearly three years ago in Montreal.

Sounds like “Rush” found a Canadian loophole when it came to drug testing, as well.

That’s according to a spirited rant by Diaz on the latest edition of “You’re Welcome” with Chael Sonnen. And since St. Pierre was on steroids — according to the Stockton slugger — he needs to come back and make things right with a welterweight rematch.

“As far as I’m concerned, everybody’s on steroids. Georges St. Pierre was on steroids when I fought him. They didn’t test us because I would have tested positive for sure. I thought it was my last fight ever. What do I care? It’s like almost asking too much to win and not give away that fine. I’m like what do I care about the fine? That dude needs to come back and give me another fight as far as I’m concerned. As long as I can fight. They did not test him for steroids for that fight. They did not test us. They didn’t test nobody for no steroids. They didn’t test nobody for smoking weed out there in Canada.”

That would be quite the bombshell, considering this stance.

St. Pierre, who hung up the gloves in late 2013, never tested positive for any banned substances during his 11-year career inside the cage. In addition, the UFC 158 drug tests came back clean, though it should be noted the commission would not disclose the names of the athletes tested due to their “confidential nature.”

As for a rematch? Don’t count on ….View full article