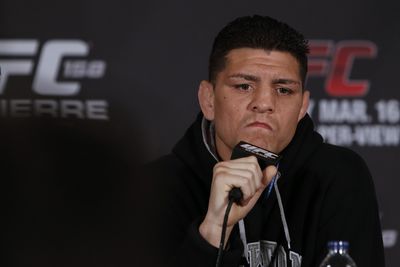 Former UFC welterweight title challenger Nick Diaz accused Georges St-Pierre of being on steroids and missing weight by three pounds in their highly anticipated title fight back in March 16, 2013 at UFC 158 in GSP’s hometown of Montreal, Quebec, Canada.

“Georges St-Pierre was on steroids when I fought him,” said Diaz on Chael Sonnen’s podcast Your Welcome.

Diaz, who’s had a well-known history of testing positive for marijuana in his career, is convinced Quebec’s athletic commission didn’t properly test the UFC 158 fighters because he would have failed the test.

“They didn’t test us because I would have tested positive for sure. I thought it was my last fight ever. What do I care? It’s like almost asking too much to win and not give away that fine. I’m like what do I care about the fine?” said Diaz.

Following UFC 158, the former Strikeforce welterweight champion did in fact retire, but came back almost two years later for a super fight with Anderson Silva where he tested positive for marijuana.

Additionally, Quebec’s athletic commission did release a statement saying that all drug tests came back clean, but they didn’t mention the names of the six fighters they tested out of the 24 fighters that competed at UFC 158.

Apart from saying that GSP was on steroids, Diaz also believes that GSP didn’t make the 170-pound weight limit for welterweight title fights.

“He missed f—ing weight. He f—ing missed weight. He didn’t make weight. How is that not news? That’s why they wanted that fight over there (in Canada). So he could ….View full article