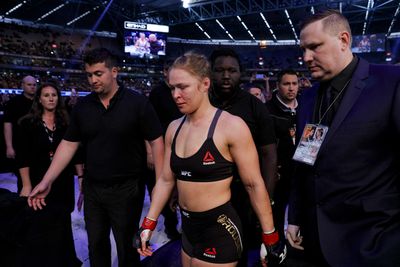 Ronda Rousey made a small error against Holly Holm and it cost her, according to Nick Diaz.

The popular UFC bad boy tweeted Saturday night that Rousey, his close friend, made a “simple mistake” in her second-round knockout loss to Holm at UFC 193 in Melbourne, Australia.

“You can’t be running in on tall people,” Diaz wrote. “Someone in her camp left that out!”

Sick of people making such a big deal it was a simple mistake you can’t be running in on tall people someone in her camp left that out !

Diaz, who is currently serving a five-year suspension for his third failed marijuana test in Nevada, thinks people shouldn’t be making that big of a deal about the loss. In another tweet, he compared it to his unanimous decision loss to Anderson Silva at UFC 183 back in January. Diaz believes if she had worked the same game plan that he had against Silva, she would have gotten the nod from the judges — unlike what happened to him.

If she had of dun like I did my last fight they wouldn’t have robbed her ….View original article