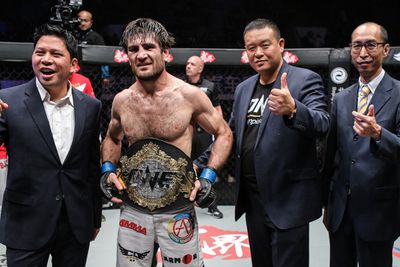 Marat Gafurov and Narantungalag Jadambaa both entered the cage as champions at ONE: “Dynasty of Champions.”

Only the Russian will leave with the belt, but the two featherweights can hold their heads high after putting on one of the best fights of the year in front of the fans in Beijing.

Gafurov is a Brazilian Jiu-Jitsu (BJJ) black belt and in the second round he looked to press home his advantage on the ground, taking Jadambaa down and hyper-extending his arm with an armbar attempt. The Mongolian showed unbelievable courage and determination to somehow resist the temptation to tap.

He came back strongly and blasted Gafurov with punches at the end of the round. The pattern of the fight was set with the Russian coming close with a series of submission attempts but Jadambaa surviving and then setting out his stall to attack in the striking exchanges

Gafurov appeared to be tiring faster than Jadambaa as the fight entered the fourth round but the Russian secured a crucial takedown and was finally able to lock in a rear naked choke that put the determined Mongolian to sleep. The unified champion remains undefeated, moving up to 13-0 while his opponent drops to 10-4.

In the co-main ….View original article