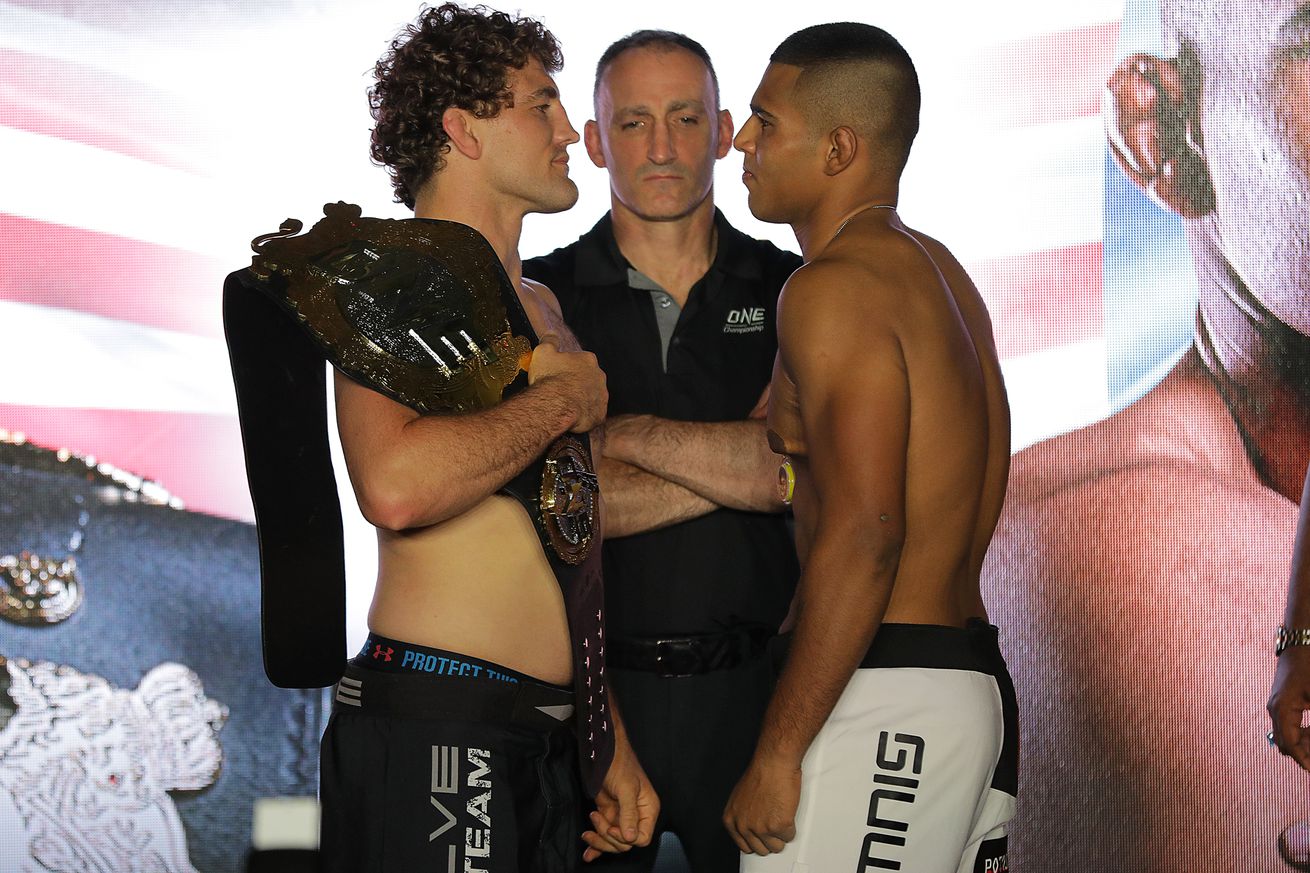 ONE Championship has put two of its biggest stars on a card which will also see Shinya Aoki in grappling action. Ben Askren and Angela Lee are both booked for title defenses and there should be a good crowd at the Singapore Indoor Stadium on Friday night (local time).

The card also features a grappling match between Shinya Aoki and multiple time world champion Gary Tonon. As always with ONE, fights are listed as walking weight, for the sake of clarity this means that if a fighter competes at 135 pounds with ONE (without cutting weight) they would compete at 125 pounds if they were with another mixed martial arts (MMA) organization (and allowed to cut weight).

Here’s my preview of the top half of the card. For part one of my preview click here.

Former straweight champion Dejdamrong Sor Amnuaysirichoke (6-2) will be desperate to avoid a third straight defeat. He would be looking at a possible title shot had one more of the judges given him the nod after a split decision defeat to Joshua Pacio earlier this year.

Dejdamrong remains one of the world’s top strawweights and has added a very solid takedown defense and ground game to his Muay Thai. The former Lumpinee champion should have too much for Adrien Matheis (2-2) who is also staring down the barrel of a third straight defeat but doesn’t have either the experience or credentials of the decorated Thai.

Zebaztian Kadestam (8-3) is an aggressive, front foot fighter who likes to walk forwards and attack with punches and low kicks. He’s the reigning PXC welterweight champion and will be looking to make a big impression on his ONE Championship debut.

Luis Santos (63-9-1-1) has at least 36 KO/TKO wins on his record and has some brutal striking but seemed surprisingly reluctant to pull the trigger during his last win. He also has a black belt in Brazilian Jiu-Jitsu (BJJ) and might want to utilize his ground game against an opponent who can definitely strike.

Ben Askren (15-0-0-1) looks unstoppable and there are few who believe that Agilan Thani (7-0) will be the man to stop him. However the Malaysian earned his title shot the hard way, winning six fights out of six for ONE and he was also undefeated as an amateur.

Than’s strength lies in his ground game but he will surely look to keep things standing here. Askren’s an out and out wrestler / grappler, probably the best in the business at taking opponents down and keeping them down, so the Malaysian’s best hope seems to be to keep it standing and swing for the fences.

Angela Lee (7-0) faces a real challenge against an opponent who has a striking background and is renowned for her head kicks. The Singaporean / Korean star is definitely stronger on the ground and will be at a clear disadvantage if she can’t get this fight down.

Istela Nunes (5-0-0-1) knows what she needs to do to win but the gulf in experience in terms of grappling and wrestling is vast. If Lee can take her down you would expect a submission to swiftly follow but the contrast in their styles makes this an interesting matchup which is unlikely to go the distance.

The ONE: “Dynasty of Heroes” card can be purchased for $9.99 USD from here.