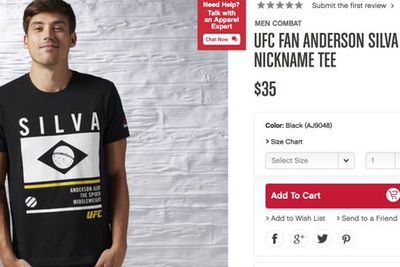 No company can be this inept.

After a string of high-profile mistakes, one of which almost cost them this Ultimate Fighting Championship (UFC) superstar, Reebok has once again botched a mixed martial arts (MMA) shirt, creating the legendary “Anderson ‘The Spider’ Aldo.”

They either don’t care at this point, or simply enjoy trolling the combat sports community.

Bloody Elbow with the pic:

Don’t bother rushing to the Reebok website to get your hands on this one, as the big weekend blowout emptied the organization’s considerable reserves. Either that, or the chat specialist called into question didn’t realize the offending shirt has since been removed from online store.

Reebok was supposed to revolutionize UFC sponsorships (see why here). Instead, it’s been a train wreck from day one, complete with misspelled names, unhappy fighters, and skeptical fans.

Anyone think this deal is still around this same time next year?