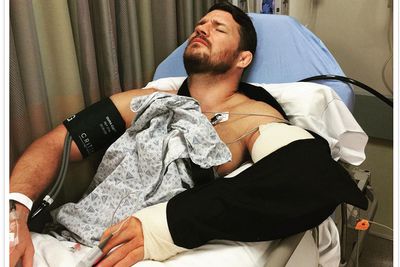 The Six Million Euro Man? We can rebuild him!

Longtime Ultimate Fighting Championship (UFC) middleweight veteran Michael Bisping underwent surgery this week to repair his injured elbow (details), one that forced him to withdraw from his Robert Whittaker fight at the upcoming UFC 193 pay-per-vier (PPV) event next month in Australia.

Whittaker moves on to face the streaking Uriah Hall.

“Literally out of surgery minutes ago,” the stitched-up Brit wrote on social media. “Ouch! Around six loose bodies removed from my elbow. #painmeds #woozy”

Someone tell USADA to stand down.

Fortunately for “The Count,” his recovery will only take a couple of weeks, so he should be rested and ready for that Anderson Silva fight the Brazilian keeps yapping about (more on that here). Bisping (27-7) is coming off back-to-back wins over CB Dollaway and Thales Leites.

If that rumored “Spider” fight doesn’t work out, any thoughts as to who Bisping should fight next?