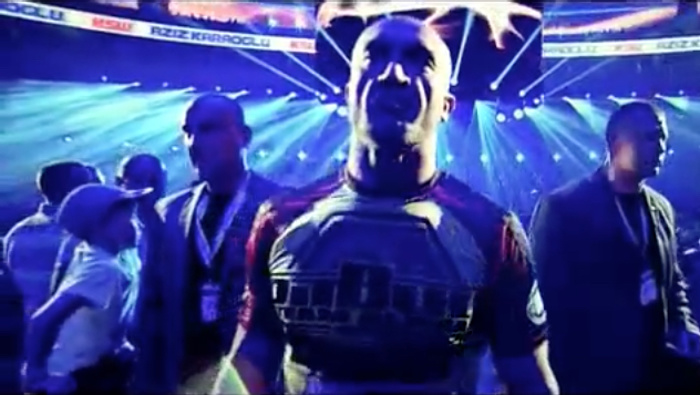 Saturday night had all the makings of becoming the finest moment of a veteran European MMA fighter’s career.

Aziz Karaoglu, a 39-year-old German-born middleweight of Turkish descent, was due to face off against long-term KSW champion Mamed Khalidov. The fight proved controversial in so many ways. In the end, Karaoglu lost a hotly-disputed decision to his Polish opponent of Chechen stock, despite Khalidov continually insisting on flopping to his back on the mat.

Karaoglu’s big night was marred from the start. A friendly, affable character as showcased in his pre-fight interview, Karaoglu looked visibly uncomfortable as he walked towards the KSW cage.

Instead of playing the traditional Turkish Dombra music Karaoglu’s fans would be used to hearing as he entered the arena, KSW inexplicably played a Nasheed song instead. While Nasheed is a general term for Islamic acapella music promoting the religion, this particular song, “Naam Qatil”, is one used by ISIS, along with other Jihadist movements in the Middle East, in many of their propaganda videos—including those that showcase the beheadings of the organisation’s victims.

Karaoglu did what any other professional would do and ignored the obvious mistake made backstage. But, the Polish press instantly picked up on the song choice and many allegations were made against Karaoglu’s character. So much so, the middleweight issued a statement in an attempt to distance himself from the error via MMANewsPL.

In the video, Karaoglu eloquently states: “Hello Poland. Hello KSW fans. First, I would like to thank everyone for their support in my fight against Mamed Khalidov. It was a good fight. I enjoy fighting and I give my best for you and for KSW. I just want to say that KSW made a big mistake. They used the wrong song for my entrance—I really wanted to use the same song as against Maiquel Falcao. ….View full article