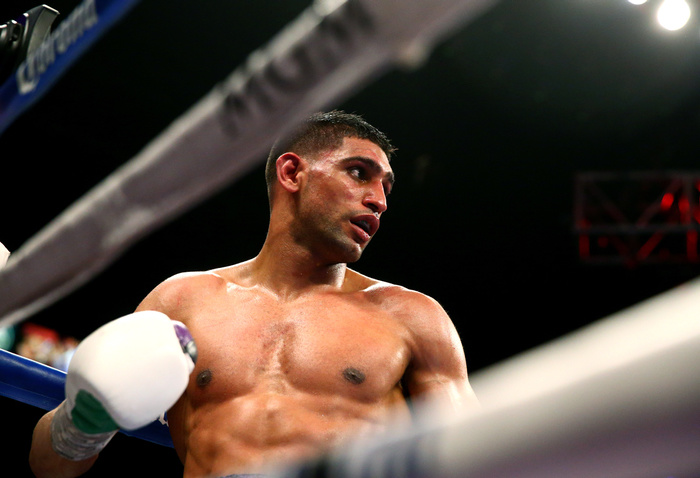 There was a time, not so long ago, that Amir Khan was a good fighter. In fact, there were plenty of occasions where Amir Khan was way more than a good fighter. He won world titles and his style is attractive, with arguably the fastest hands in boxing and the power to back them up. Even his famed glass chin has improved. I mention these things because they are easily forgotten amid the bluster. If his skills in the ring are forgotten, it’s not really anyone’s fault but his own.

The great comedian Stewart Lee once did a show called “On Not Writing”—Amir could do a follow up called “On Not Fighting”. Khan’s recent career has been characterised by the sort of optimistic, borderline delusional overstretching in search of the biggest names in boxing. As any boxer knows, when you go for the huge haymaker and miss, there’s a decent chance that you end up on your back looking at the ceiling. Metaphorically at least, that’s how Amir Khan must be feeling after his big fight with Manny Pacquiao collapsed yesterday.

Of course, had the Pacquiao fight gone ahead, he might have had the opportunity to stare at the stage lights for real. Then again, he might have outboxed an aging Pacman en route to a reestablishing himself. We’ll never know, and the truth is that for years it has suited Amir more to talk about the fights that he thinks he deserves rather than the ones that he’s actually fought.

The details of how the fight never came about are as tedious—the investor willing to pay for the fight to take place in the Middle East pulled out—as they are predictable. The draw of Khan, a proud Muslim, to fight in the UAE is obvious, but anyone with a cursory knowledge of how sports work in the region would be able to explain that without an investor willing to make a loss on hosting the event, this was never going to happen. Sports like soccer and cricket, far better supported in the region, are routinely played to completely empty stadiums, held only for the prestige of the local moneymen.

There was, of course, potential to make cash from PPV but the Middle East would be about as bad a place as any to hold a fight, being as it is in the worst possible time zone for fans basically anywhere that anyone who pays for boxing lives. A standard 10pm ringwalk would be 6pm in the UK, 2am in Manila and 10am in Vegas. In short, logistically impossible. So for the fight to take place at the figures mentioned by Bob Arum, somebody was looking at a $38m hole in their bank account, and that’s only covers Manny’s half of the pot.

Arum wasn’t fooled by this of course. He told the LA Times: “When they contacted me, I told them it was pie in the sky. That this is crazy, it’s not going to happen. Manny wanted to roll the dice. He rolled the dice and it came up snake eyes. If something is too good to be true, it’s too good to be true.” Arum committed to fighting in the UAE, but no date or opponent have been set—though he was clear that it would not be Khan. “I’m talking to him about another proposal for another fight, not Khan. Khan won’t be Manny’s next opponent.”

It’s a familiar feeling for Khan. He spent roughly three years trying to get Floyd Mayweather into a ring with him, only to end up, like so many have, grasping at thin air. In that case, the money made sense—Khan brings far more of an audience than many of the names that the Pretty Boy fought—but Floyd had no interest. In Khan’s defence, many—myself included—felt that Mayweather ducked Khan, precisely because he had all the attributes to make it an interesting bout. The only name on Floyd’s record with speed comparable to Khan’s is Zab Judah, whom Kham beat handily. The fight never happened and Khan ended up struggling to a decision win against Chris Algieri, a man knocked down six times by Manny Pacquiao.

Top names don’t have to take fights that don’t suit them and Khan knows this too well – he’s spent the last few years avoiding Kell Brook. In fact, he took a much harder fight with Canelo Alvarez, well above his regular weight, rather than face a potentially career-damaging fight with Brook. Spurned, Kell found himself on a similar path, taking a beating from Gennady Golovkin.

Going up to face Canelo with zero expectations is a far easier proposition than taking on a domestic superfight, where a potential loss that would be reputation shattering. Beat Brook and nothing is proved, lose and you’re done. Khan’s excuse was, naturally, that his split of the purse was too small, but many would quack in his direction.

Brook’s style is ready-made to unpick Khan’s weaknesses. He switches stances often, challenging Khan’s weak defense and counters hard, perfect to catch Amir’s notoriously fragile chin. Brook has stopped 7 of his last 8 at 147lbs, his only decision win an impressive victory over Shawn Porter. Khan is known to take on all comers, but that reputation suffers the longer he avoids Brook.

Khan-Brook would have been the fight of the year, the biggest British bout since Froch-Groves II and perhaps longer than that. It would have sold out any stadium in the country and posted record PPV numbers. Instead we got two middleweights destroying two welterweights in fights that nobody asked for. There’s time yet for Canelo, GGG, Khan and Brook to do-si-do into combinations that fight fans actually want to see: the hope of the boxing fan springs eternal. Age is on their side.
For Khan, he will continue to think that he operates on a world level, and nobody will believe him. He won’t get Pacquiao, just like he didn’t get Mayweather, and he’ll end up fighting someone he thinks is beneath him. He’ll likely win. Brook is due to ink a showdown with Errol Spence in Sheffield any day now. Win that and he’s looking at Danny Garcia, Keith Thurman or Timothy Bradley. The quacks in Amir’s direction might become too loud to ignore.

Golovkin vs. Jacobs – Boxing’s Two Best Middleweights Will Face Off