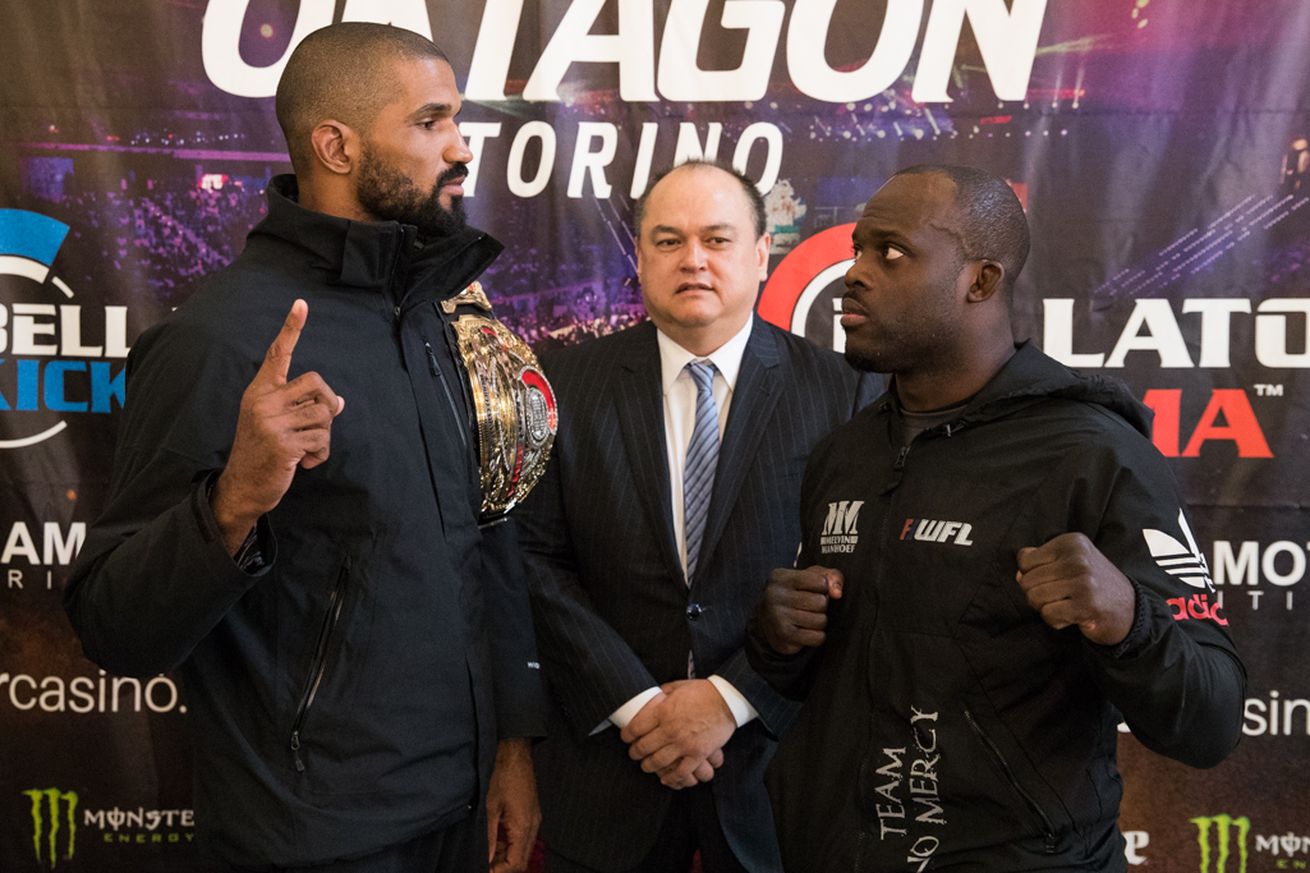 Rafael Carvalho’s first title defense in Bellator, a split decision win over Melvin Manhoef in May 2016, was far from memorable.

Almost a year later, the 185-pound champion is looking to impress Saturday in Torino, Italy, in a rematch against Manhoef at Bellator 176 — but don’t think he’s worried about the critics he’s heard from since his last fight.

Carvalho and Manhoef fought for 25 minutes in the main event of Bellator 155 in Idaho in a contest that turned out to be one of the worst fights of the year.

“The fight went according to what we have planned with my coaches, the strategy we set,” Carvalho told MMA Fighting. “I, as champion, have an advantage. He’s the one who has to come and try to take this belt from me, he had to do more than me. I didn’t see him doing that to deserve the belt. I’m more motivated now, and I’ll show how good of a champion I am, that I own this division. I still have a lot of things to show.”

“(The critics) doesn’t bother me at all,” he continued. “I try not to pay attention to those kind of critics because nobody knows what we go through on daily basis, nobody knows how our training routine is, so I try to not to pay attention to the critics, especially because those who criticize never entered a cage, anyway. They don’t know how is it to enter a cage to fight. I try to just focus on training and fighting.”

To be fair, Carvalho also admits that he didn’t take too many risks in the five-round fight, but thinks Manhoef is the one to blame in the end.

“There was too much respect from both of us because we both have great knockout power and neither of us took too many risks,” Carvalho said. “I thought his instinct and style would make him come forward, but he was too defensive. It went how we planned: keep the distance, move, be smart with the attacks. I’m happy with the way it went. The important thing is to keep the title. It doesn’t matter if people like it or not, the belt stays with me.”

Most of the MMA media and fans scored the fight in Manhoef’s favor, according to MMA Decisions, but the champion says he’s “positive” he won the fight.

“I dominated the center of the cage, moved forward all the time,” he said. “(Manhoef) landed one or two punches, but I took him down, too. I deserved the win.”

Carvalho and Manhoef were initially expected to rematch on Dec. 10, but the champion was pulled from Bellator 168 with an injury. The Brazilian fractured a toe three days before leaving the country. His doctor advised him to avoid any activity for 40 days, but he only stayed out for 25 days “because I can’t just sit and do nothing.”

“I see this going down in two different ways: it will be the hand or the knee,” the champion said. “That’s how I see it. I see myself knocking him out. It’s been a long time since my last knockout, and this fight will end with a knockout. It will be even better to defend the title with a knockout against a knockout artist like him. It will taste better.”

Two months before putting his title on the line in Italy, Carvalho threw his gi on to compete in a jiu-jitsu match in Brazil. He didn’t get the win in the end, but is happy with his performance.

“I actually did pretty well,” Carvalho said. “The other guy was heavier than me, bigger than me, and I managed to do well. I almost submitted him, but the match ended in a draw.

“This year will be different,” he added. “I’ll try to fight more often, and not only in MMA, but other martial arts, too. To stay in rhythm. We need this. I’ll stay active, but nothing that coincides with my fights at Bellator.”

And jiu-jitsu is not the only martial art he’s interested in competing in this year. In fact, the 30-year-old Brazilian is looking to add more belts to his collection.

“I’m a Muay Thai fighter first, and fighting for Glory or Bellator Kickboxing would be great,” Carvalho said. “If I have the opportunity, why not? Whoever they think I can fight, I’m in. There’s Joe Schilling, who I beat in Bellator. It would be nice to fight him in his area, under his rules. It would be an interesting match-up. Or maybe go straight to the belt and hold both titles, to make history.”