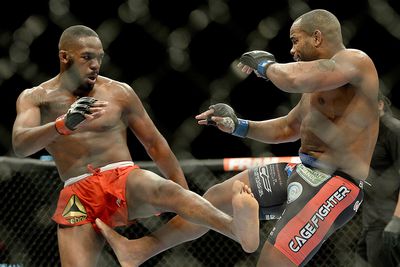 Rampage isn’t thrilled about this decision, claiming it has more to do with fighter safety.

With the one-time Ultimate Fighting Championship (UFC) light heavyweight titleholder making a triumphant return to the organization, after being reinstated yesterday (Fri. Oct. 23, 2015), it appears not everyone is calling this a “good day” for the sport of mixed martial arts (MMA).

Just ask former “Bones'” foe Quinton “Rampage” Jackson, who claims it’s not just the actions of the former pound-for-pound star outside the cage that deserve attention (via Inside MMA).

“I hope he comes back. I hope he learns from his mistake…. But I’m not saying it because I’m a fan of Jon Jones because honestly I think that Jon Jones is bad for the sport, because when he fights people, he injures us. He kicked my knee backwards, my knee is never the same. He’s done it to a couple other guys. I saw him rip one guy’s shoulder out his socket. We just try to the same thing he’s trying to do, earn a living ….View original article