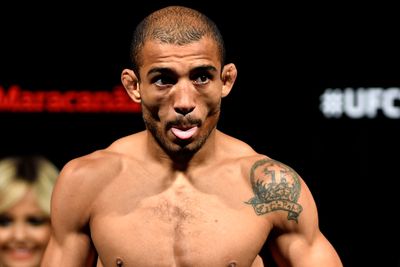 Randy Couture is not impressed with Ultimate Fighting Championship (UFC) after the promotion released footage of Jose Aldo weeping in his locker room following his 13-second knockout loss to Conor McGregor at UFC 194 a few weeks ago (see the video here).

During his conversation with Submission Radio, “The Natural” insisted the world’s preeminent mixed martial arts (MMA) promotion doesn’t care, saying it didn’t have Aldo’s best interest at heart. Plus, he says his people would’ve made sure cameras weren’t anywhere near him after a loss back in his day.

“Well, we can probably go down the list of fighters that have not been shown or been kind of dumped on by the promotion. I don’t think at the end of the day the promotion cares that much. I don’t think they had Jose Aldo’s best interests at heart there. Did they have Georges St-Pierre’s best interest at heart? And that was after a victory, but because he wanted to take a hiatus, all the things that were said and done with regard to Georges — I certainly might fall into that category if I wanted to start talking about that — but there’s certainly been other fighters that, you know, they [UFC] do what they think is best for them at the end of the day. Here’s my question. Where were his handlers? Where were his trainers? Those are the guys — and having been in that situation after the Chuck Liddell fight, after retiring in the third Chuck Liddell fight, my guys weren’t letting those [camera] guys in. You know, that was our space. They wanted me to have that space. And I remember specifically, Nate Quarry hollering at the camera men and telling him, ‘look get outta here’ and not letting them in the room.”