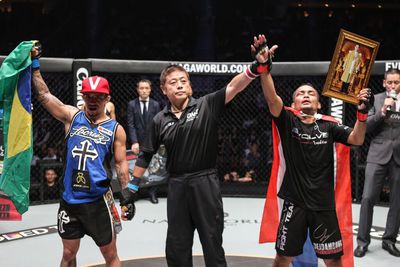 ONE: “Pride of Lions” took place at the Singapore Indoor Stadium on Friday (Nov. 13, 2015) and in the main event of the evening, ONE Strawweight World Champion Dejdamrong Sor Amnuaysirichoke defeated Yago Bryan of Brazil by unanimous decision in a non title, five-round fight.

The original main event of Ben Askren vs. Luis Santos was canceled after “Sapo” failed to make weight (details).

Both fighters traded shots in furious exchanges, with Dejdamrong choosing to tag Bryan continuously with high and low kicks, while Bryan opted to counter with left hooks. A minor cut opened up above Dejdamrong’s right eye in round one, but was quickly patched up by his corner. Much of the same action continued throughout the bout, but it was the champion who was the busier fighter down the stretch, earning the judges’ nod.

In what was a battle of tremendous strikers, Kotetsu Boku’s impressive boxing display earned him a victory over highly-regarded Major Overall of the United States. The action was tense in the first round as both fighters swung for the fences with wild, looping shots.