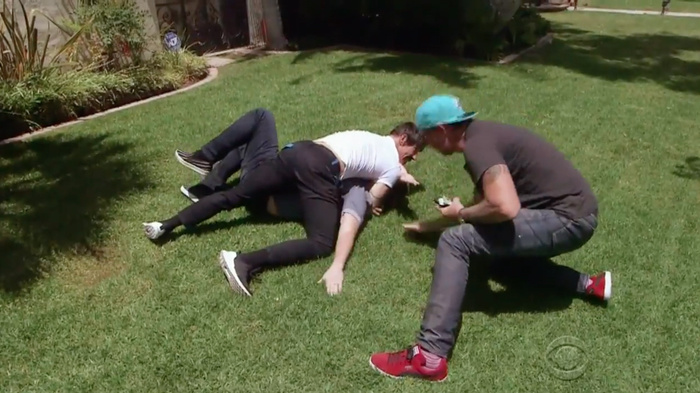 It’s been twenty-two long years since Royce Gracie showed the world what the fuck was up and now everyone seems to know at least a little bit of Brazilian jiu jitsu.

Especially celebrities, who love spending cash on private lessons. You might not see them getting all sweaty with the common-folk during group classes, but every once in a while an Instagram post will pop up with someone of note wearing a gi, and us MMA fanatics will sit back and smile.

All sorts of stars have been exposed as martial artists: Demi Lovato, Shaq, Michael Jackson’s son Prince, Ashton Kutcher, Spencer Pratt, the list goes on and on. Yesterday, during the wildly popular segment of The Late Late Show with James Corden, in which the host rides around with various artists and sings their songs, Red Hot Chili Peppers singer Anthony Kiedis showed himself to be the latest celebrity to join the cult of BJJ.

After telling a story about how bassist Flea got into a fight with his friend in highschool, Keidis mentions that they all used to wrestle on tour.

“You do? Be honest now. Grappling?” Keidis says with a glimmer of excitement in his eye. “No elbows, no knees. Chokes?”

“No punches. Like a hold down,” Corden answers as he puts his hand in the singer’s face.

“Ayo! He’s got the face move… There is a lawn right there. Let’s wrestle.”

“We can wrestle anytime you want. I will destroy you.”

“PULL OVER!!” shouts the band.

Corden pulls the car over, and, well, the rest is water under the bridge.

Start the video at 4:58 to see the unshocking conclusion, and some surprisingly technical guard passing.