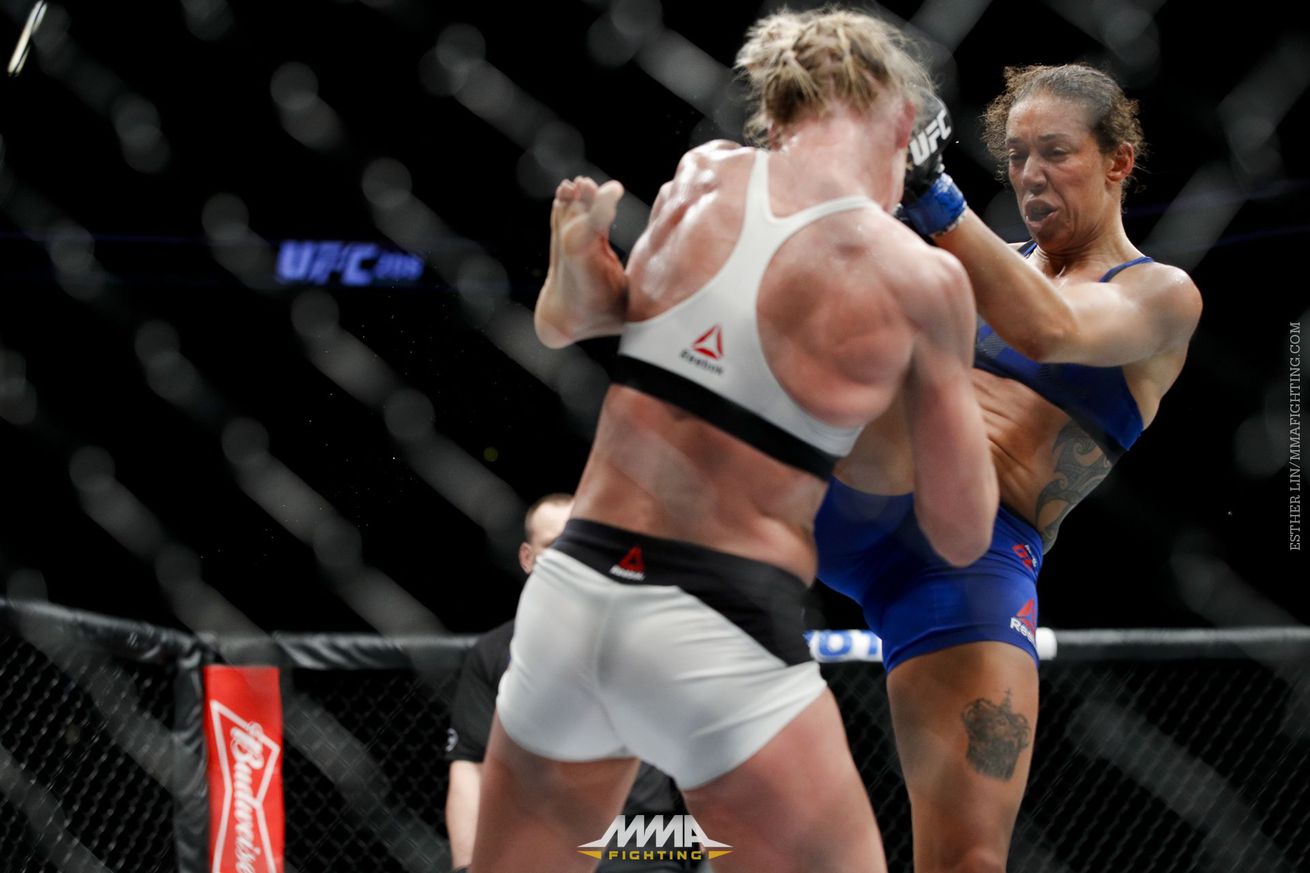 There is a common misconception in MMA, according to referee Rob Hinds. The bell does not end a round or a fight — the ref does, per rules. It doesn’t matter if strikes come after the bell, only if those strikes were thrown after the referee steps in to stop the action.

“When the bell sounds, whenever that happens that’s just our indication to stop the round,” said Hinds, who is an Association of Boxing Commissions and Combative Sports (ABC) certified trainer of referees and judges. “That’s not the signal for the exact end of the round. We need to make sure we’re in position and everything is in place to stop the action as close to that horn as possible.”

That could add a new perspective to the controversial events during the UFC women’s featherweight title fight between Germaine de Randamie and Holly Holm on Saturday night in the main event of UFC 208 in Brooklyn.

At the end of both the second and third rounds, de Randamie threw punches after the bell that landed. The first transgression, after the second round, wobbled Holm against the cage and was one of the most significant blows of the entire fight.

Anderson did not seem to give de Randamie a warning about late punches following the second round. He did give her a warning, saying he would take a point next time, after the third round.

“A lot of times, the first one they give a warning, that’s kind of normal,” Holm said in the post-fight press conference. “I wouldn’t expect them to take a point after the first one, even though it was intentional. The second time, at that point you think they’d do something.”

According to Hinds, a referee must hear the clack when there are 10 seconds remaining in a round and begin to prepare. A ref has to close the distance to the competitors and, when the horn sounds, get in between them physically and also shout something verbally to halt the action.

“Once we’ve done that, we’ve intervened and anything after that is punishable,” Hinds said.

In both instances Saturday night, de Randamie seemed to start throwing the punches before Anderson could get in between the two women and shout, though it’s hard to pinpoint because it happened quickly. It’s also difficult to determine intent.

Hinds says these are situations in which referees must look back afterward and assess their performance, something he calls “personal accountability.”

“Could he have closed the distance better?” Hinds said of Anderson. “Possibly. Did he have that countdown from 10 in his head, so he had a pretty decent idea of when that round was coming to an end? Did he get physically involved and verbally involved? Those were some of the pieces that when we look at our performances, we could go, ‘I could have done that a little better.’”

Hinds said if Anderson had given a warning to de Randamie the first time about late strikes, it would have made it easier for him to take a point after the second instance. But because there was no warning previously, some referees will be hesitant to dock a point without something verbal first.

“If you don’t take care of things as they happen, it steamrolls,” Hinds said. “Because he didn’t give her a soft warning the first time or address it directly the first time, now that second time, this is a strong warning phase. This is a hard warning.”

In this particular instance, Hinds said it would be within the rules to dock de Randamie a point, even after the first late strikes. The things referees look at when determining whether to take a point are: intent, if it’s a repeat foul, how much damage it did, and how much did it affect the fight, Hinds said.

“The second time, it absolutely could have been [a point],” he said. “There’s no doubt. Even if was done the first time, it would have been considered acceptable.”

When asked what he would do if he were Anderson after the third round, Hinds admitted, “Yes, I would have taken the point.”

That one point ended up being the difference in the result. If de Randamie was docked, the fight would have been a draw and there wouldn’t be a champion.

Anderson, Hinds said, is “an outstanding referee,” but mistakes do happen, especially in high-pressure spots with very little time to think or margin for error.

UFC president Dana White criticized the NYSAC for letting Anderson do a UFC main event title fight, because he is inexperienced compared to other referees. Hinds said White once said a similar thing about him after his stoppage of a fight between Josh Barnett and Frank Mir in 2013.

“That’s just [White’s] opinion. Todd definitely has the skill, the training and quite a bit of experience. Do you put him in a main event title fight? Do you trust him? I would.”