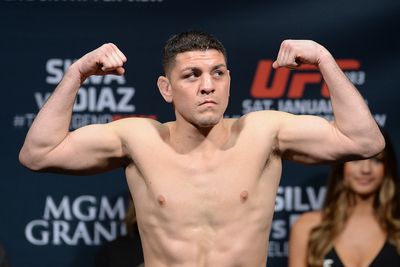 My, how time flies. Has it been five years already?

Actually, no. The seemingly draconian sentence handed down by Nevada State Athletic Commission (NSAC) to Nick Diaz for his third infraction for positive testing of marijuana metabolites is likely to be significantly reduced.

According to Amy Dardashtian, the legal correspondent who broke this story earlier this week via Twitter, NSAC is close to caving from public pressure.

“Multiple sources are telling us that basically public pressure got to this commission with at least one of the commission members receiving death threats,” Dardashtian told “Inside MMA” in a Friday interview.

According to her sources, Diaz is in settlement negotiations with NSAC commission members and Nevada’s attorney general. Ultimate Fighting Championship (UFC) attorneys have also flexed their legal muscles on behalf of the Stockton slugger throughout this process, all of whom are working to negotiate a suspension of 1.5 to two years and backdate it to Jan. 2015, which is when Diaz last competed at UFC 183.

“Which means we could be seeing him back in the Octagon as early as this summer if this particular deal works out,” she said.

So why the change of heart?