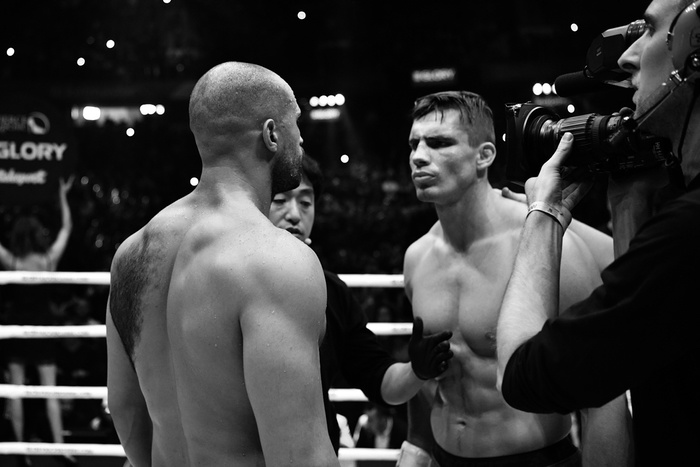 Was it a big, fat, pay-per-view hype or the heavyweight upset of the decade? Rico Verhoeven’s second round TKO of Badr Hari at GLORY: Collision on Saturday night in Oberhausen, Germany, was unexpected to say the very least.

Competing for the first time in a year, Hari, the controversial and colorful Dutch-Moroccan kickboxer, and former K-1 heavyweight champ, came into GLORY 36 as the people’s choice to win the three round super-fight. And though the inactive, pugnacious challenger may have mysteriously lost the match, Hari showed the punters, and the promoters, that now, or next year in 2017, he’s still got the tools to duke it out with the young bloods of the new school.

In combat, Hari the bad boy (who used to be called “the Golden Boy,”) proved that he’s as sharp as ever. Nimble of foot, and patiently boxing behind a speedy left lead jab (seasoned by training with heavyweight boxer Tyson Fury), he cut the bridge of Verhoeven’s nose to convincingly win round 1. Bloodied but unbowed, the champ, an orthodox fighter like the challenger, came back and engaged Hari with focused, technical aggression in round 2. “The Prince of Kickboxing” lived up to his regal moniker by countering Hari’s left lead with sharp hands and clubbing, low kicks. The action, however, was soon to be cut short. Verhoeven closed the range to clinch; opening up with a sharp knee to the gut, followed by a high, farewell knee that scraped Hari’s right shoulder. It was during the clinch that Hari seemed to injure his right arm—forcing the referee to end this much publicized heavyweight bout in round 2 and declare Verhoeven the winner via TKO.

“I don’t know what happened. I just snapped it at that moment, I think,” said Hari in a post fight interview that lasted longer than the match itself. Hari was pressed for details. Was it an injury to his right forearm, or was the damage done by Verhoeven’s knee to the shoulder? The former K1 legend refused to disclose any further. “Let me go to the hospital, take some pictures (x-rays), see what happens.” 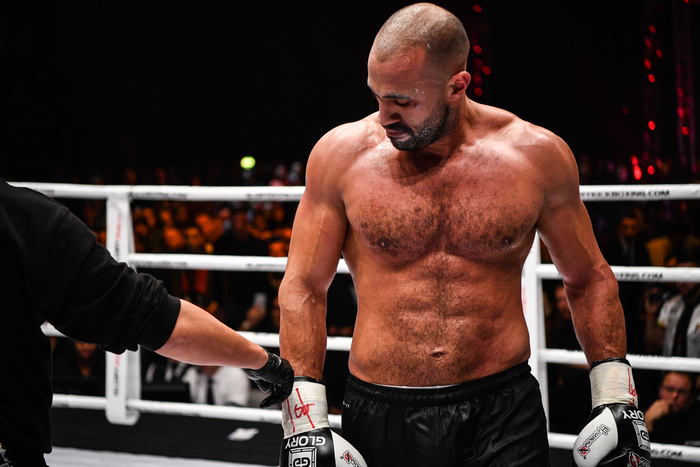 After the hype and hyperbole, it gives the paying spectator cause to ponder and speculate. Was Hari feigning injury to escape a humiliating loss on the cards to the clean cut champ or was this injury straight up legit? Quite possibly the latter: Hari has been dogged by injuries in the past and needed much time off between bouts to recuperate. Whatever the reason for Hari’s early exit from the contest in round 2, it was an unfortunate anti-climax to a much anticipated grudge fight.

“This is not the way I wanted to win,” Verhoeven said.

But here’s the good news: the reigning champ is up for a rematch in 2017.

“I gave him all my respect. We’re gonna do it again, man. Let’s do it. Not just for us, but you guys (the sporting public) as well.”

It was a nice round number for Verhoeven. This blunt edged joust was his 50th victory as a career kickboxer.

And “GLORY: Collision” was a nice big victory for the company, too. Presented by UFC.TV, this was GLORY’s return to pay-per-view sporting events, and the sole focus of this stacked card was on one fight alone: Rico Verhoeven vs. Badr Hari. Present champ against former champ, Lancelot vs. Mordred, a bums on seats, glued to the TV, kickboxing extravaganza to snare North America’s 18-49 year old MMA viewing demographic. 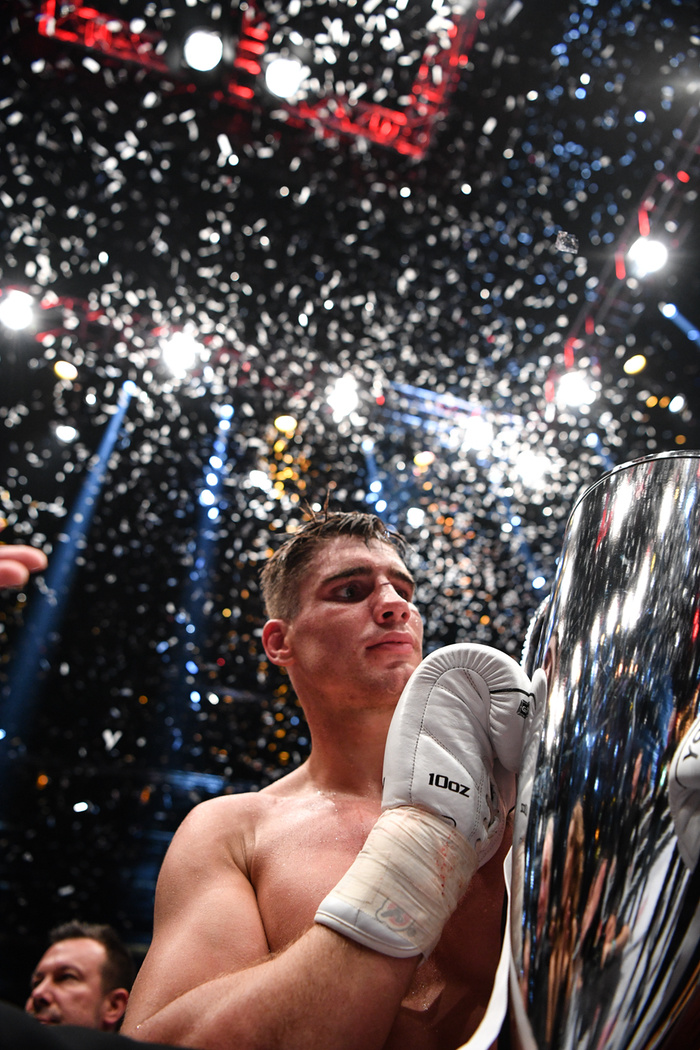 Beyond the razzamatazz of spectacle and the lucre of ratings, this was also a big human drama, too. Given Hari’s criminal record, and history of “unsportsmanlike conduct,” no one really knew quite what to expect because anything can happen during a Badr Hari fight. If it’s not Badr Hari himself, it’s the antics of the punters who flock to his human circus. GLORY’s main event almost didn’t start on time. Rowdy, manic spectators—most of them Hari fans—swamped the ring to get pictures of the snarling, villainous kickboxer. It took some time for Ashtari Onsari, the referee of the match, to clear out the riff raff and start up the bout.

Despite an inglorious end to the contest, Hari was on stoical form for his legion of fight fans.

“I’m very disappointed in the outcome of the fight,” he said. “You know, I’ve had a lot of shit in my life, but (my fans) always support me. I think nobody wanted the fight to end like this… so let’s do this again. I will knock this guy out next year.”

The boastful bully fighter went one further for those in attendance, calling Verhoeven over and saying to his face: “I gave you the credit, but next year, I swear, I will knock you the fuck out.”

Big bad words from the gnarly old thug but it’s no vain boast. Hari is a knock out artiste with a cult of bloodthirsty followers. Out of 106 wins in 119 fights (and now 13 losses), Hari has won by KO on 94 occasions. Will it be same time next year for Badr vs. Rico? We certainly hope so. The GLORY organization must be licking their lips and rubbing their paws with glee at the prospect of another turbulent clash of kings in 2017. It might even top the gate and gross of this pay-per-view event. Or, quite possibly, end as ignominiously as this much hyped fight of the decade. Roll on the New Year. Let’s hope that it’s better than 2016.

Check out this related story:

Death or Glory, It’s Just Another Story for Badr Hari