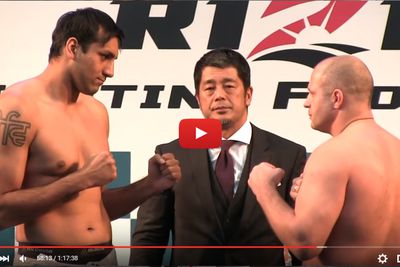 Headlining tomorrow’s (Thurs., Dec. 31, 2015) fight card is the heavyweight showdown between Fedor Emelianenko and Jaideep Singh. “The Last Emperor” looks small and soft for a combatant widely-regarded as the top heavyweight of all time, but that’s part of his appeal.

Then again, everyone on stage looked small and soft compared to Gabi Garcia.

Emelianenko’s size and physique never stopped him from wrecking shop in the past, and bookies aren’t expecting anything different against the towering kickboxer when the pair collide early tomorrow morning on Spike TV.

Also of note, the aforementioned Garcia and Lei’D Tapa weighed in for their open weight showdown, as did Akebono and Bob Sapp.

For full results of all the day one action click here and for more RIZIN news and notes click here.