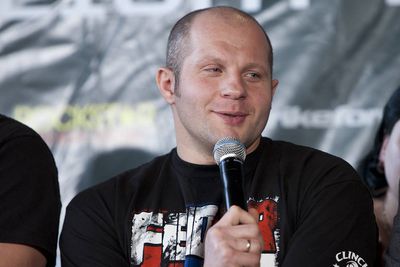 With Rizin Fighting Federation (RFF) finding success with its first-ever event last month in Japan, promotion CEO Nobuyuki Sakakibara is now hoping to take his show on the road in 2016.

And one of the stops he intends to make is Russia, home to the biggest star on his roster, Fedor Emelianenko.

According to statements made to RSport.ru (via Bloody Elbow), the upstart mixed martial arts (MMA) organization is hoping to host its third event in Mother Russia sometime later this year. That’s because plans for a second Fedor-headlined show to take place elsewhere are already in motion, expected to go down in April.

“If possible, we want to organize the tournament Rizin in Russia as soon as possible. And, perhaps, it will happen in 2016. Yesterday, the Minister of Education, Culture, Sports, Science and Technology, Government of Japan, Mr. Hiroshi Hase, handed Fedor Emelianenko memorable gifts from the Japanese government. Relations between Russia and Japan in big sports are strengthening, and we would like to be a bridge towards that.”

“The Last Emperor” made good on his MMA return, taking out Jaideep Singh in the main event of the promotion’s New Year’s Eve (Dec. 31, 2015) extravaganza in Saitama, Japan.

As for who the former PRIDE FC heavyweight champion faces next and where, that’s still up in the air. That said, there aren’t a shortage of challengers eager to test themselves against the longtime great. Chief among them is Muhammed Lawal, who expressed interest in facing the Russian-born fighter.

Inside the Bellator MMA cage and on United States soil, however.