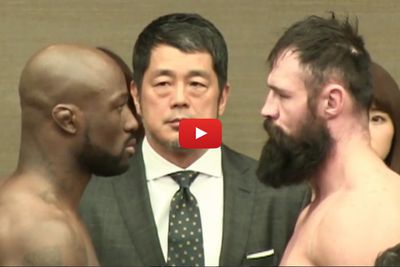 Stateside fans will recognize a couple of familiar faces, like former Strikeforce light heavyweight champion Muhammed “King Mo” Lawal. He faces off against British banger Brett McDermott, who has a serious case of bed head and looks like he was TKO’d by jet lag.

See the entire fight card and line up here.

The Rizin heavyweight tournament goes down Dec. 29 in Japan, with the semifinals (and finals) taking place on New Year’s Eve, the same card featuring the long-awaited return of Fedor Emelianenko (more on that here). The tournament winner takes home $500,000.

And no doubt a considerable argument for taking on “The Last Emperor” in 2016.

Check out more weigh in pics (courtesy of Rizin FF) below: