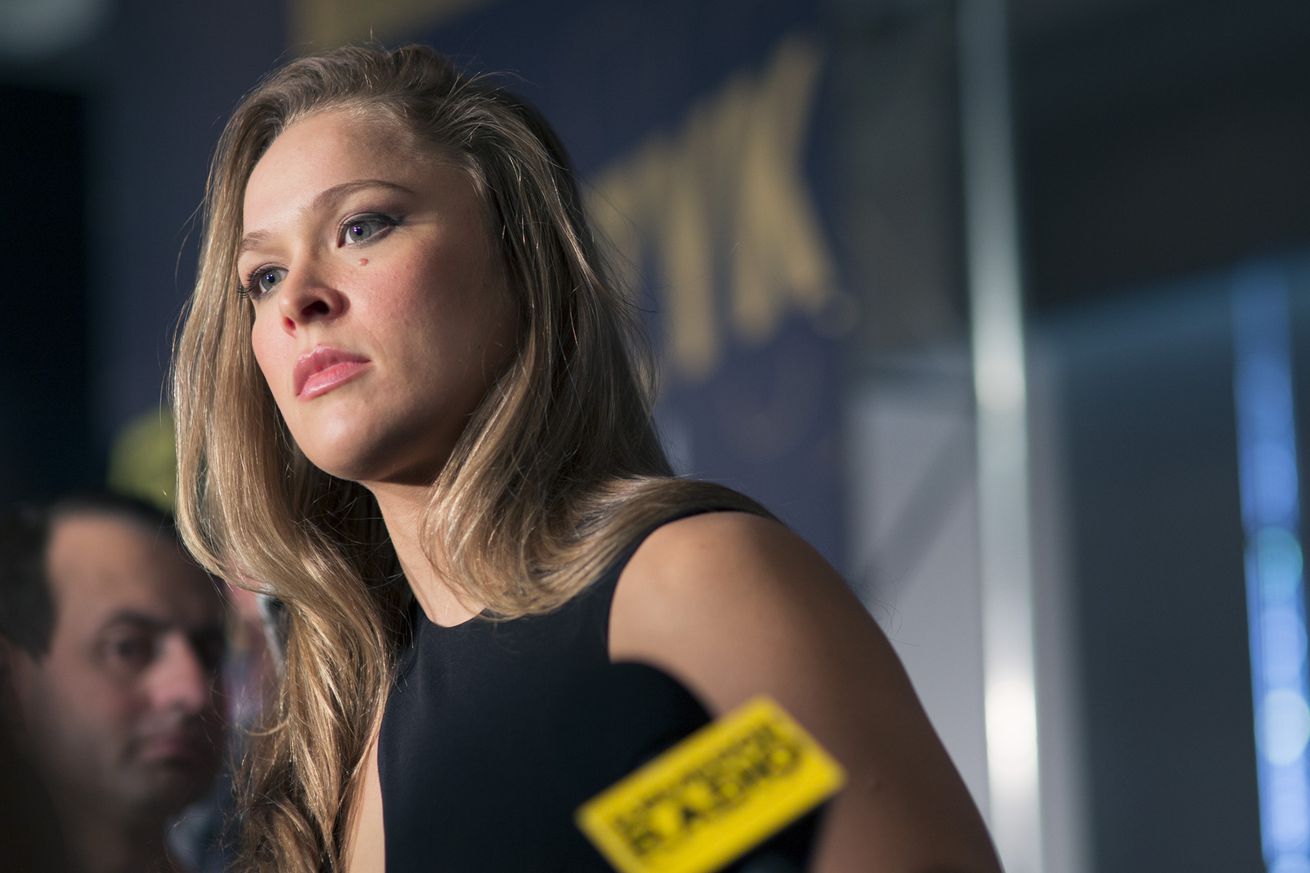 Between February 2014 and August 2015, Ronda Rousey fought for a grand total of two minutes and 10 seconds. That was all it took to finish off Sara McMann, Alexis Davis, Cat Zingano and Bethe Correia. In that time she was anointed as the “Mike Tyson of MMA,” so savage in the cage that the real allure wasn’t if but how long. Yet she was also the “Royce Gracie of women,” in that she galvanized a new perception toward fighting. She didn’t take the edge off of what we were watching; she gave that edge meaning.

Still, she could wear a gown on a red carpet and look equally at home. She could appear on a morning show and armbar the hosts through a sequence of bashful giggles (and an unmistakable depth of menace). She could smile and intimidate, interchangeably, and this appealed to just about every gawker on the planet.

It was a winning combo.

During those momentous times it was books. Movies. Beyoncé. She outgrew the cage. She outgrew the UFC, the sport. She distanced herself from common life. We used the word “transcendent” a lot, which was some very nice glitter to sprinkle over the mixed martial arts — a word we didn’t get to use often. People who couldn’t stand the idea of fighting paid attention to Rousey, because her presence became about far more than a literal fight. We read into her as a great metaphor — a parable. She stood for something, and there was vicariousness in play. When she said, “I ain’t no do nothing bitch,” it was like she put up a war chant to her legions. She transcended into pop culture. Into an historical figure. She defined the age. She was no longer a mixed martial artist. She was Ronda Rousey, the symbol.

You can see how the identity markers might have gotten a little lost.

That’s why, some 380 odd days ago, as she was heading back from Melbourne, Australia with her jaw jacked up and the first loss on her record, it’s easy to imagine her despair feeling as big as the ocean she was flying over. Imagine, that is, not empathize with. It’s impossible to know what it’s like to lose as much, with a mind that could — apparently — conceive so little. Nobody lost more in a single fight than Rousey did in that loss to Holly Holm at UFC 193.

It was cataclysmic in the Buster Douglas sense, in that some David just not only took out Goliath, but made Goliath look silly in the process. Holm shot Rousey full of ridicule. She turned a force into a farce. Who can forget Rousey charging at Holm, and Holm turning matador? Rousey on the ground, visibly scrambling to put back the pieces, to reconnect the natural order of things.

Then the head kick…and the feeling that came with seeing her fall. Hysteria is sometimes the thrill of watching an idol crash down to earth, like a truth revealed. This sport has never witnessed that kind of hysteria. There were never so many gathered, from all walks of life, to feed it. Rousey falling after so much collective belief in her invincibility was one of the most memorable moments in MMA history. Why? Because it was something like a restoration of reality. It was an event that prompted people to begin sentences with, “That’s what happens when…”

I can remember fans saying at the time that “it was only one loss,” but it was (obviously) more than that. Especially to her. To relive those moments was enough for her to invent Idaho. To find warmth in the idea of Alaska, where she daydreams about disappearing with her boyfriend Travis Browne and being done with the spotlight for good. Rousey didn’t lose; she got broken. And everything she stood for — everything people assigned her, and she embraced in turn — has been put on trial. Which is where things got weird. In how she handled losing. The champion didn’t act as a champion in defeat.

The champion slunk away. And not in the “I need to regroup” sense, but more so in the “f*ck you all” sense.

Over the last 13 months, Rousey has distanced herself from all that she was built-up to be. She has sulked to the point that fewer and fewer people can relate to her. If sports are meant to be a form of escapism, that’s a hard sell — nobody wants to watch a sustained bout of power-sulking. Yet Rousey has asked her fans to stand-by as she does just that. Or rather, no, she hasn’t. She just kind of let everyone who pumped her full of hope and symbolism suffer through the dawning of their own delusions.

People were sick of Rousey heading into her fight with Holm. This time, as she heads into her fight with Amanda Nunes, it’s her petulance that has grown tiresome. It doesn’t help that she has been handled with the utmost delicacy by the UFC. She’s not doing media, which is (again) historic for somebody of her stature in a game centered on hype. In fact, it’s as if she has purposely downplayed her return, which is a hell of a thing for pay-per-view. To take a shrink gun to the moment. How did things get this counterintuitive?

Now is the moment of truth, of course. Rousey returns as perhaps the most decorated champion in UFC history. Six title defenses. Five first-round finishes. A mile of vendettas. The pioneer of women’s MMA. The comeback story that should feel so big. The comeback story that was perhaps full of false narrative to begin with. The fighter we thought we knew so well. The fighter that we never knew at all. Is she more than we thought, or less? Which is it? Who shows up?

Who is Ronda Rousey?

In some ways, that’s always been the question.